On the seventy-third anniversary of the founding of our modern state, let me introduce you to a family hero.

The following is my translation of a Hebrew-language Facebook post by Eviatar Lichtman. Dr. Egon Riss is a Pikholz descendant, my father's half second cousin. I have been in contact with his widow Jona for twenty years and even visited with her once, and am Facebook friends with two of their three children, but I never heard any of this before. Nor did I know that he had a wife who was killed during the War of Independence. (More about her in a separate post.)

Eviatar is not a family member, but a tour guide to whom Israel's history is important. Coincidentally (if you believe in coincidence), I met him in shul last week! 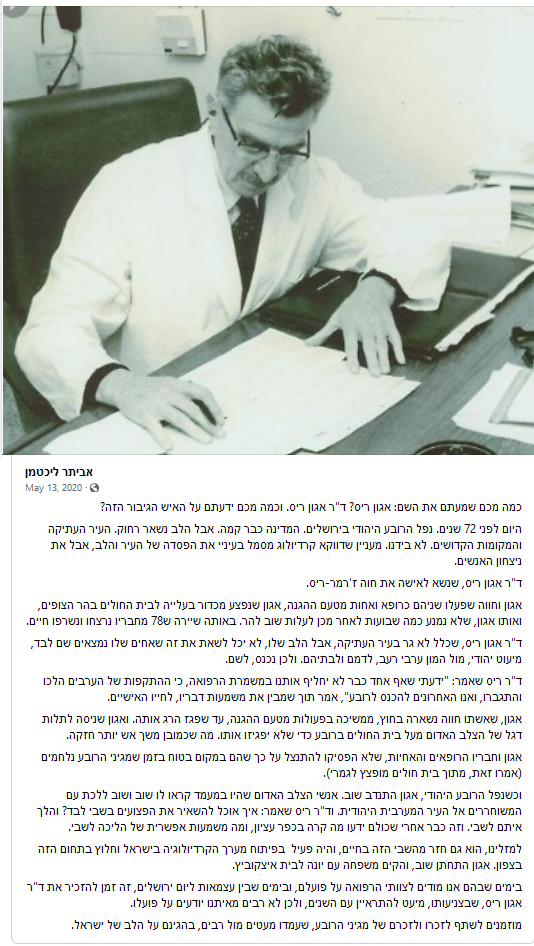 Seventy-two years ago today, the Jewish Quarter of Jerusalem fell. The State had already been established. But its heart was detached. The Old City and the holy places. No longer in our hands. Curiously, it is a cardiologist who, to me, symbolizes not only the loss of the city and its heart, but the victory of the people.

Egon and Hava, who worked together as doctor and nurse as part of the Haganah militia, Egon who was wounded by a bullet on his way to the hospital on Mt. Scopus, the same Egon who nonetheless resumed going up to the mountaintop hospital several weeks later. In the same convoy where seventy-eight of his colleagues were murdered and burned alive.

Dr. Egon Riss, who was not a Jerusalem resident himself, but his heart could not accept that his brethren were there alone, a Jewish minority, against an Arab throng hungry for their blood and their homes. So he went. There.

Dr. Riss who said "I knew that no one would relieve our shift because the Arab attacks were intensifying and we were the last ones to enter the [Jewish] Quarter," he said, understanding the significance of his words for his own life.

Egon, whose wife remained outside [the city walls], continuing to work on behalf of the Haganah, until she was struck by a shell. And Egon, who tried to raise a Red Cross flag above the hospital so it wouldn't be shelled. Which of course drew increased fire.

Egon and his colleagues, the doctors and nurses, kept apologizing for being relatively secure while the Quarter's defenders had to fight. (They said this as the hospital absorbed constant shelling.)

And when the Jewish Quarter fell, Egon volunteered again. The Red Cross called on him over and over to evacuate to the western part of the City. And Dr. Riss said "How can I leave the wounded to remain alone in captivity?" And he went with them. This was after everyone knew what had happened in Kefar Etzion, and what "going into captivity" might well mean.

Fortunately, he returned alive from captivity and was involved in developing cardiology in Israel, becoming a pioneer in his field in the north. He married again, to Jona Itzkowitz, with whom he had a family.

During this period [the corona virus], when we are so grateful to all the medical personnel and in this period between Yom Haatzmaut and Yom Yerushalayim, it is an appropriate time to remember the modest Dr. Egon Riss, who rarely granted interviews so few of us know of his actions.

Everyone should remember him and the defenders of the Jewish Quarter, where the few stood against the many, in defense of the heart of the City. 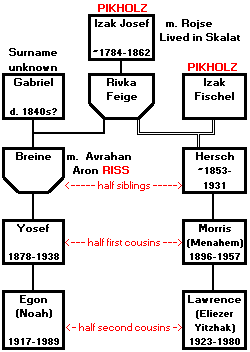 Incidentally, there are three Riss cousins named Egon, all born within a sixteen-year period.  You can see their places in the family here, about a quarter of the way down the page.