Could there possibly be a better name?

One of my regrets is not giving it to Devir as a middle name.

My maternal grandmother's brother, was named Chaim Benzion. Hymen Benjamin in the United States. He was born in Borisov Belarus in 1894 and had four older sisters, born about 1879, 1886, 1887, 1889. The spacing is odd, with long breaks after the first and the last of the girls.

I knew Uncle Hymen and the way he told the story, his parents had other sons who either died young or were stillborn. (I don't recall how specific his knowledge was.) So when he was born, the rabbi said to use the name Chaim (=life) for good luck.There is a Jewish tradition of playing with names to fool the Angel of Death. At least, that's the way Uncle Hymen told me the story.

So I have always assumed that Benzion was one of Uncle Hymen's ancestral names, hence one of mine. And I was pleased as punch to have a Benzion among my ancestors. 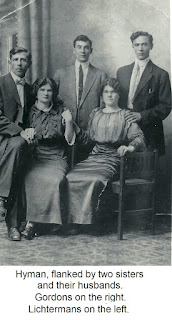 Uncle Hymen's parents - my great-grandparents - are my namesake Israel David (aka Srul) Rosenbloom, the son of Yaakov and Shayna Liba, and Etta-Bryna the daughter of Yehudah the Levite, surname and mother's name unknown. So Benzion was not Uncle Hymen's grandfather, but could have been any of his four great-grandfathers. Or perhaps an uncle, though that seems much less likely.

The Belarus database on JewishGen shows a number of Benzian

Rosenbloom references, but much younger, so I always thought there was a good chance Uncle Hymen's namesake was his father's paternal grandfather. Not so good a chance as to actually write it that way in my database, but slightly more likely that any of the others.

In the course of signing on to this project, I took another look at the JewishGen Belarus Database, which I'd not seen in some time. It had a surprise for me, in the 1858 revision lists.

There is no doubt in my mind that these are the parents of my great-grandfather Israel David Rosenbloom, together with two sisters I had not seen before. I had never seen any evidence of siblings, though I assume he had some. For both of his parents, the fathers' names were listed. New names for me. Srul's paternal grandfather is Itska (Yitzhak) and his maternal grandfather is Khaim (Chaim). No Benzion.

And the wheels began turning in my mind. Chaim was not just a good luck name to fool the Angel of Death. It was a full-fledged ancestral name. Surely Uncle Hymen hadn't made up the story of his naming from whole cloth. But maybe it was a real story with the details wrong.

There were sons who died young. Even if their names are important, we generally don't reuse them as is. That makes it too easy for the Angel of Death. My father's father's eldest brother was named Mordecai Meir after his grandfather, but he died at thirteen months. For the next son, they kept the Mordecai, but changed the second name to Shemuel and Uncle Max lived to age eighty-six.

It makes sense that the dead sons of Srul and Etta-Bryna were named for their own grandfathers. Perhaps one was Chaim Yitzhak for Srul's grandfathers. And he died young so you don't want to use it again. Maybe change the order of the names? Or maybe something more clever.

I love this beyond words. I love the idea that my great-grandfather and namesake might have thought of it himself, or at least adopted the idea. A solution after my own heart. I really really want this to be true. I suppose we shall never be able to prove it, but if we can find Etta-Bryna's  grandfathers' names, we can call it progress.

We cannot record it as fact, but we might accept it as our working assumption.

Rosenbloom cousins, what do you think?? 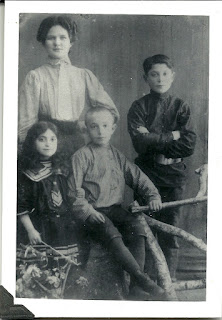