Most of  my readers know by now that the Lazarus tool on GEDmatch (a Tier 1 tool which requires a small donation) enables you to recreate a partial genome of a person based on DNA of his descendants and other relatives.

If your Lazarus kit has 1500 cM or more, it will be batched by GEDmatch and you can use it in one-to-many searches. With that, you can see who else that kit matches and how. 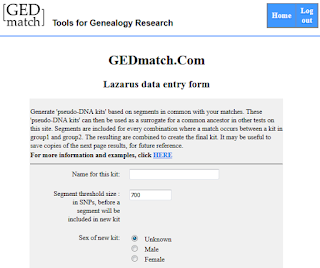 Lazarus works with two groups of relatives. Group 1 is descendants of the target, children, grandchildren even great-grandchildren - though the further away you get, the less useful. Group 2 is non-descendant relatives of the target - siblings, aunts and uncles, cousins etc. The idea is that in a non-endogamous population, any segment that appears in both Group 1 and Group 2, must be shared by the target.

In endogamous populations, that's a bit more complicated as it is easy to mistakenly introduce segments that do not belong, as I discussed about six weeks ago regarding the Lazarus kit of my great-grandmother Jutte Leah Kwoczka.

The Facebook group "GEDmatch Lazarus Tool" gives users a place to discuss their experiences and problems and to get advice from others. That groups was founded by the indispensible Blaine Bettinger and he also provides a link to his blog with a detailed explaination on how to use Lazarus. Blaine's blog includes the following: 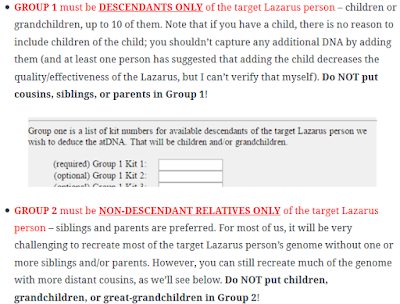 Later he repeats for emphasis:

The most important rule is to
NEVER EVER PUT A DESCENDANT IN GROUP 2!!

Nearly two years ago, I challenged that blanket statement in this space. I wrote:


There is, however, an exception. When the target has children from multiple spouses who are not related to one another.

I explained this using a fictional discussion within a well-known historical family, which is worth a reread.

The subject keeps coming up, so I thought it worth a review.

The idea is that since the target's multiple unrelated spouses are, well, unrelated, if you put the descandants of one spouse in Group 1 and descendants of another in Group 2, you do not run into the problem of misattribution that I described above.

This subject comes up from time to time in the Facebook group because despite the fact that GEDmatch adjusted its instructions to permit half-siblings in Group 2, Blaine's linked blog still has the old instructions which warns sternly against doing so.

This is not a trivial matter. In my Jutte Leah Kwoczka blog cited above, I described how I struggled to reach the 1500 cM minimum, even though I had fifteen descendants in Group 1.

But let's look what happens when we use two half siblings - one each in Group 1 and Group 2. For this I return to my favorite fourth cousins, David and Anna, great-great-grandchildren of Uncle Selig. They have the same father but their mothers are not related to one another. Both mothers are Polish so there is no issue of Jewish endogamy in play.

Using a one-to-one, we get 1619.7 cM right off the bat, more than the 1500 cM we need for batching. (This does not include the X, but we don't need it because obviously David has no X from his father. If we were talking about two sisters, we would add the results of the separate "X 'One-to-one' " tool.)

Blaine's very important Shared CcM Project shows the average half-sibling match to be 1731.05 cM, but the diffrence between that  and David and Anna's shared 1617.7 cM probably includes the X which they don't have at all. In any case, 1617.7 cM is a reasonable result.

But we can do better.

The 1617.7 cM is based on a threshhold of 7 cM. That is, it excludes anything below 7 cM. In fact, if two half-siblings have smaller matches, they surely come from the shared parent. Their father also has those small segments, even if they came to him as IBS (Identical By State).

I ran the "One-to-one" again using a threshhold of 4 cM (the lowest permitted by Lazarus) and added these six segments. That brings the total match between David and Anna to 1649.8 cM.

I created a Lazarus kit (shown on the left), using the 4 cM threshhold, with only David in Group 1 and only Anna in Group 2. I fully expected to get a kit with that same 1649.8 cM. The result is 1642 cM - close but not perfect. I'll let GEDmatch figure out what the difference is and why.

The results are good enough for batching.

Of course, if David's full brothers would test, we could add them to Group 1 which would improve the results. Probably significantly.

If Anna also had full siblings, even better.

And if we could add their one known second cousin (whom I hope to meet at my presentation in Rishon Lezion in three weeks) to Group 2, we could also improve the results. I'm not sure by how much.

But the point is, this works.

Skalat memorial
The annual Skalat memorial at the Holon Cemetery outside Tel-Aviv is the day after Shavuot - this year Thursday the first of June at five thirty, next to the Skalat monument along the eastern wall of the cemetery. Those of you saying Yizkor that day may wish to keep us in mind.


4 June 2017, 7:00 PM – IGS “Shorashim BaGalil” Kiryat Tivon, Library and Memorial Center, Migdal 2
and
19 June 2017, 6:30 PM – IGS Rishon Lezion, Museum of Rishon Lezion, Ahad Ha’am 2.
Both are the Hebrew version of
Lessons in Jewish DNA – One Man’s Successes and What He Learned On the Journey
Moscow
I have my ticket in hand for my trip to the US for the Orlando conference, with a stop in Moscow for a day and a half. I'll be meeting there with two more of my newfound Kaplan-Rosenbloom second cousins. I am very excited about this. (I introduced you to this family here, here and here.)

Presentations in Orlando
I have now signed up introducers for all four of my presentations at the IAJGS Conference in Orlando 23-28 July. Two of them are people I have never met - but they are Pikholz descendants, one from Skalat and one from Rozdol.
Unveiling
On my way back from Orlando, I'll be in Chicago for a couple of days.  I understand that my sisters there plan to have my brother's unveiling then.
Posted by IsraelP at 7:09 AM