The Bauers and the Rosenzweigs

Autosomal results came in recently for Susan, my second cousin on my father's maternal side.

This is the structure of the family. The shaded names have tested and results are in. One more is not on GEDmatch yet. 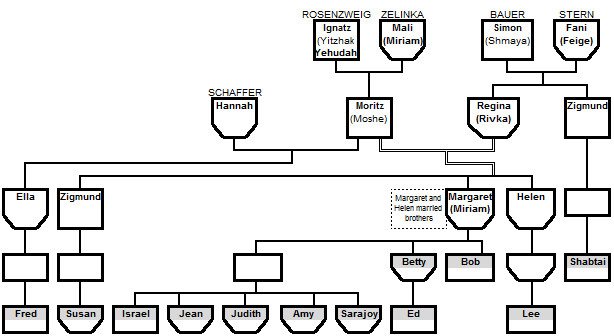 We also have tests from my father's second cousin, Shabtai, on the Bauer/Stern side and from Fred, the grandson of my grandmother's half-sister on the Rosenzweig/Zelinka side. Fred's Jewish DNA is all from Aunt Ella.

Susan's first matches, as ranked by Family Tree DNA, include all those known relatives plus a second cousin on her mother's side.

I set up a chromosome browser on GEDmatch for all eleven of Susan's matches on our sides to see if we could discern a significant amount of DNA from each of my great-grandparents' sides.

On the right is the color code that GEDmatch uses to distinguish segment sizes. Remember, the sizes of the graphic bars are not proportional to the actual centiMorgans.

I did not include the X chromosome because Susan is related through her father's father, which produces no X component.

Seven of Susan's chromosomes have matches with both Fred and Shabtai, eight with Shabtai but not Fred, four with Fred but not Shabtai and three with matches with neither. After triangulation, we can tell without much doubt that certain segments of our DNA come from one side or the other. Of course, we also have segments which are clearly on my grandmother's side, but since neither Shabtai nor Fred shares them, we cannot tell whether they come from the Rosenzweig/Zelinka side or the Bauer/Stern side.

Normally, I would say that we need to test additional cousins on each side, but Fred is an only grandchild and Shabtai has only one living sibling and no known cousins. We have a fifth cousin on the Zelinka side but she does not match Susan and we have a fifth cousin once removed on the Rosenzweig side, but his small match with Susan on chromosome 6 does not match any of the rest of us.

I really have to refresh myself on the use of Kitty Cooper's mapping tools. Doing this on all sides would help understand which ancestral couple provided what parts of our DNA but also what was the make up of the ancestors themselves.

Housekeeping notes
This Wednesday, 13 April, I am speaking about DNA at the Petah Tiqva branch of the Israel Genealogical Society. Seven o'clock at Yad Lebanim, Arlosorov 30. I'll be speaking in Hebrew. Signed copies of ENDOGAMY: One Family, One People will be available for purchase.

Seven weeks until my next programs, in London and Toronto. You can order books for pick-up there until 30 May.