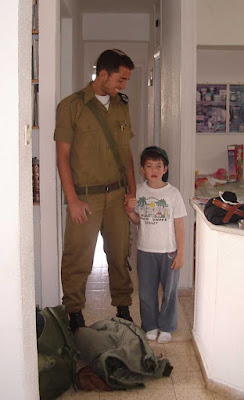 This morning, my #4 son Devir was delivered into the hands of the Israel Defense Forces for the next three years.

I'll say some more about that below, but for now here he is when my #3 son was a new recruit.


Part three of the five-generation charts was a few days ago.

Part One
About a month ago, David Allen Lambert suggested on Twitter - @DLGenealogist - that we compose and post five-generation trees showing the longevity of our ancestors. I posted mine on Facebook at the International Society of Genetic Genealogy (ISOGG) and probably a few other groups.

Others ran with it, some with small changes, some the way David had set it up. Some took it out to an additional generation. I probably should have used different colored fonts for different decades. The fad ran for about a week or ten days.

Part Two
Then about ten days ago, J. Paul Hawthorne - whom I don't know - posted a similar chart for places of birth. Blaine Bettinger brought it over from Twitter to Facebook where it caught on quickly.

The structure there was to use a different fill color for each US state or country. Blaine's was actually pretty boring, as most of his were from a particular area of upstate New York. 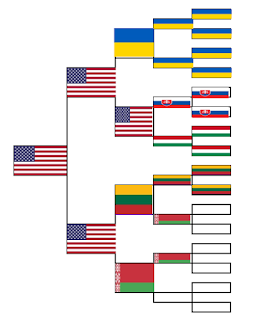 I had done something similar for display at Devir's bar mitzvah six and a half years ago, using flags, so I figured that using flags rather than random colors would be meaningful. As I had done then, I considered each ancestor to have been born under the relevant flag of today. My chart looked like this.

The European countries from top to bottom are Ukraine, Slovakia, Hungary, Lithuania and Belarus, but as Karesz Vandor so helpfully pointed out, Slovakia was not an independent state until 1993, so including it here would be very misleading.

If I had used the relevant countries when the ancestors were born, it would be too boring, as all my father's people were under Austro-Hungarian rule and all my mother's Russian. (Not as boring as Lara Diamond's all-Ukraine chart, to be sure...)

So I used that structure but added comments. 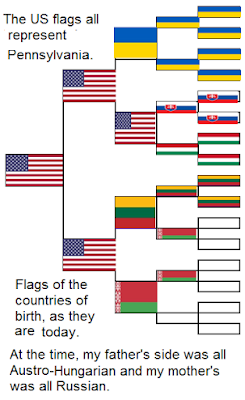 I could have gone a bit further and made this for Devir instead of for me. That would put an Israeli flag at the root and would add four Union Jacks and eleven Polish flags, in addition to a few more Slovakian and Ukrainian flags.

This is how it looked at Devir's bar mitzvah, only larger.

Devir and the IDF
Giv'at Hatahmoshet. Ammunition Hill. That's where the boys gathered this morning for preliminary processing. It's where a major battle was fought during the Six Day War, nearly fifty years ago.

There was a popular song about that battle, told in the voice of "the commander."


I was afraid the Jordanians would throw more grenades. Someone had to run from above and cover. I didn't have time to ask who would volunteer. I sent Eitan. Eitan didn't hesitate for a moment. He climbed up and began to fire his machine gun. Sometimes he would overtake me and I'd have to yell to him to remain in line with me. That's how we crossed some 30 meters. Eitan would cover from above and we would clear the bunkers from within, until he was hit in the head and fell inside

Eitan didn't hesitate for a moment.

But he ends with


I don't know why I received a commendation, I simply wanted to get home safely.

I simply wanted to get home safely. Our society has changed like that, from one end of the song to the other.

In 1997, the Israeli security cabinet authorized the Mossad to kill Hamas leader Khaled Mashal in Jordan, using poison. The poison was administered but the two agents were caught. In order to secure their release, The government of Israel had to provide an antidote to the poison and release Hamas leader Ahmed Yassin, who was serving a life sentence. I heard the head of the Mossad on the radio saying (and I speak from memory) "The most important thing is that our people were returned safely."

Many of us are old school like that. I think that most of the boys in our circles think like that - at least when left to their own devices and supported by their parents and their teachers.

Go in peace and return in peace. You don't have to serve with distinction, but serve honorably. And be a ben Torah.
Posted by IsraelP at 11:18 AM