Each of the major DNA testing companies has an analysis of ethnicity based on their autosomal tests. They appear more based on statistics than on science and my feeling is that it's more a marketing tool than anything else, useful in a general sense, but not to be taken too seriously. These reports are meant for inquiries into deep ancestry, but many people use them to see if they had a Cherokee great-great-grandparent and such. I don't think that many people use them to solve twentieth century questions. Certainly not questions that are ancestor-specific.

Family Tree DNA (FTDNA) where I test, calls their analysis "My Origins" and here is what they show about me. 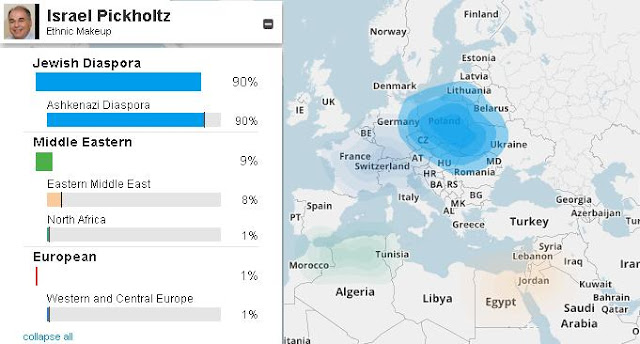 They have a breakdown by percentages and a map showing where those different groups are located today. As expected, they say I am 90% Jewish Ashkenazi with a bit of "Eastern Middle East" and a few margin-of-error types thrown in. My sisters are similar to me, but with small differences. As I say, useful in a general sense especially for people who have little idea of their ancestral backgrounds, but not to be taken too seriously.

Last week I spoke at the Israel Genealogical Society's Petah Tiqva branch, giving my usual basic DNA talk. I told the story of Joanna, the Polish woman whose grandfather Julian (1911-1986) was supposedly the illegitimate son of a Pikholz who was the estate manager in Klimkowce, not far from Skalat. The structure we worked out over time in our first foray into genetic genealogy was this: 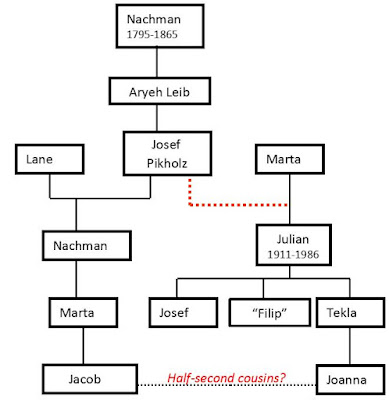 The people who tested are Jacob and Joanna's uncle who insisted on anonymity. His kit is listed as Filip, who is in fact Joanna's son. Jacob himself was in the audience in Petah Tiqva. The reason this looked like a good bet for genetic testing was not only that the relationship is close enough to be doable, but also because even if DNA showed a slightly more distant relationship, there was no alternate explanation. Any DNA that "Filip" and Jacob have in common could not have come from anyone else as all of Joanna's family is strictly Polish.

You cannot go into all the possibilities in that kind of lecture, but in fact Jacob and I were always aware of one other possibility. We don't know if Josef was still alive when Julian was conceived. A grandson was named for Josef six months after Julian was born, so perhaps Josef could not have fathered Julian. But Josef had several sons who would have been in their twenties and there is a good chance that whenever Josef died, one of the sons became the estate manager in his place. So perhaps one of Josef's sons was Julian's father. (The sons, by the way, were not full-brothers of Jacob's grandfather. After Jacob's grandmother died, Josef married a Pikholz niece and the other sons were from her.)

It was, however, my best estimate that Josef himself was the father, especially since Julian named his first son Josef for reasons that no one in the family ever knew.

The DNA was ambiguous. Here are "Filip's" first six matches: 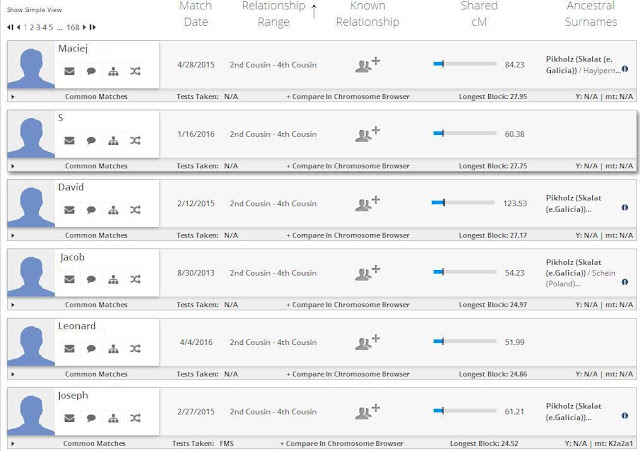 As is clear from the ancestral surnames on the right, four of the six are Pikholz descendants. The first three of those are Jacob and two of his cousins. (The fourth is my third cousin in Denver. I don't know why he is here.) All of them are called "2nd cousin - 4th cousin." I would have expected Jacob and "Filip" to be 2nd-3rd cousins, but in fact if you look at the shared centiMorgans, Jacob's connection is the weakest - both in longest segment and in the aggregate.

The weakness of the match between Jacob and "Filip" could be the randomness of DNA, but it also could be because Julian's father was one of Josef's sons. I preferred the former. Jacob himself was less certain.

So as the Q&A continued in Petah Tiqva, Jacob also mentioned that "Filip's" My Origins showed him to have only 17% Jewish Diaspora making it quite impossible for him to have had measurable Jewish DNA from any non-Pikholz source.

In any case, "Filip's" grandfather was a Pikholz and about twenty-five percent of his DNA should have reflected that - regardless of whether it came from Josef or one of his sons. Seventeen percent seemed to me beyond the norm. (I'd say "beyond a standard deviation" but that would imply that I know something about statistics.)

After I got home, I had a closer look. Here is "Filip's" My Origins: 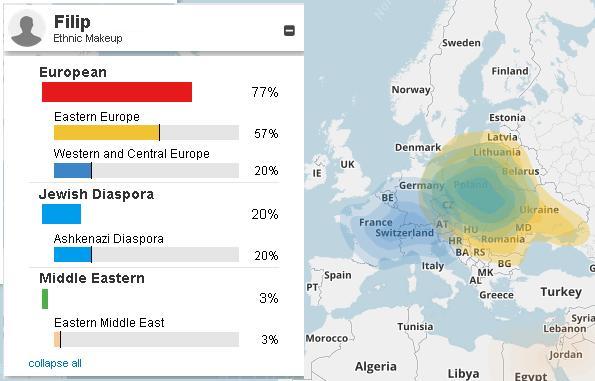 Filip's "Ashkenazi Diaspora" component is 20%, not the 17% that Jacob had cited. FTDNA recalibrates these numbers from time to time. That's still less than what we would expect from someone whose grandfather was fully Jewish. I also called up Jacob's My Origins.

Jacob appears to be 86% Ashkenazi with another 14% that is probably Sephardic. Filip has none of the Sephardic or other Southern European  or Turkish..

If I had to decide between Josef and one of his sons as the father of Julian, based on the DNA results and the My Origins (remember, I am not a big fan of My Origins and no one really thinks it is a precise measure of anything), I would say it like this.

Filip got less than the normal 25% of his grandfather's DNA. So no wonder that Jacob's match with Filip is weaker than one might expect. But Jacob's match with Filip is not extraordinarily weak - not enough to account for both the 20%/25% difference and the addition of an extra generation, even an extra generation which comes from Josef's niece/wife..

So I will stick with "Josef himself is Julian's father." But then I don't know much about statistics. And I don't much trust My Origins. It may be that these ethnicity percentages can occasionally be used to address ancestor-specific questions from 106 years ago. Who knew?
Posted by IsraelP at 12:33 PM