Which Families Have Taken DNA Tests - and Which Have Not

There is a bit more than one week left in the current FamilyTreeDNA sale, with Mystery Reward coupon codes thrown in as well. It seems like a good time to see what we have.

As I write, we have sixteen Family Finder tests on order - fourteen from Pikholz families from Skalat and one each from other families of mine. None from the Pikholz families from Rozdol. I am hoping for more before the end of the sale. We also have two new Y-37 tests on order and three Y tests being upgraded. These numbers do not include a few people who took coupon codes but I have not seen them being used.

That brings us up to fifty-two Family Finders for Pikholz descendants alone, thirty-nine from Skalaters.

Let's look at what we have.

In my personal Pikholz family, we have nine descendants of my great-grandparents, two more on order, one additional descendant of Isak Fischel, my g-g-grandfather and two Kwoczka cousins, descendants of brothers of my g-grandmother. We also have one test for an apparent descendant of Uncle Selig and another on order.

Within that group we have tests for three of my grandfather's four lines - one Y-67, one being upgraded to a Y-37 and one MtDNA. I'd love to get the other MtDNA.

We have five tests from the family of Moshe Hersch, which I discussed here recently at length. One more is on order. One of the tests we have is from Leonora who is also a descendant of Mordecai (see above) and is not counted there.

We have reason to believe that there is a close relationship between that family and the family of Simon, where we have one test on order. There is one candidate for a Y in Simon's family, but he has not responded to my many requests.

The Riss and Baar families, which I think are one. Each has one Family Finder test on order. I'd really like three from each family.

The only candiate for a Y test in this family is being upgraded from Y-37 to Y-67.

Moshe Hersch (1850) has no living descendants that we know of. 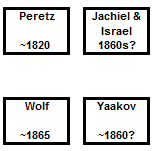 Three descendants of Peretz have done Family Finder and two more have ordered. Those five cover Peretz' four daughters. We do not have one for descendants of his son.

We have Family Finders on order for two descendants of Jachiel and I am trying to get at least one from a descendant of his brother Israel.

I have not yet succeeded in getting a descendant of Wolf or Yaakov to test and I haven't a clue how they fit into the family structure.

Moving on to the Rozdol families, where everyone should be a descendant of Pinchas and Sara Rivka.

We have three Family Finder tests and a Y-37 for clearly documented descendants of the original Rozdol Pikholz couple.

We have a Y-37 for David's line, but I have not succeeded in getting Y tests for Izak's documented line or Hersch Leib's line. Abraham's line has no candidates for Y and they have not agreed to do Family Finders. 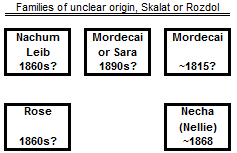 We have one Family Finder each for descendants of Mordecai and Necha. I had thought those would prove a close relationship between them and to one of the Skalat families, but I learned quickly that DNA tests can also disprove theories.

And that concludes the summary of the Pikholz families.

One second cousin of my father's on my grandmother's mother's side has ordered a Family Finder and a Y-37.

On my mother's father's side, two second cousins have done family Finder and one has done MtDNA.

On my mother's mother's side, one second cousin has done family Finder and I am working on some others. I am also working on getting a Y-37. I did the MtDNA myself.

My mother-in-law did a Family Finder.
Posted by IsraelP at 7:22 AM