Moshe Hersch - Can We Finally Decide?

During the last few weeks, I have been concentrating on the question of Moshe Hersch Pikholz of Skalat. Not the one whose parents are Nachman (~1795-1865) and Sara.

At the time, we had Family Finder (autosomal) results for Jane, Charles and Leonora. Nan and her two children had tested but we had not yet seen results.

Last week, we received results for Nan's daughter and in my excitement I jumped the gun a bit, fully expecting that Nan's results would settle the question - to the extent that any question of third cousins can be settled by DNA.

We now have Nan's results and I was correct. Nan is Charles' closest match after Leonora; FTDNA has the suggested relationship as "first-third cousins. Nan is Leonora's third closest match: FTDNA calls them "second-third cousins."

These are excellent results. Jane is close enough to Charles and Leonora to make our case worth considering, but Nan's DNA is convincing.

Last week I wrote here that Nan's daughter's match looked very good at the chromosome level. Nan herself brings her chromosome 20 matches, that her daughter does not have. 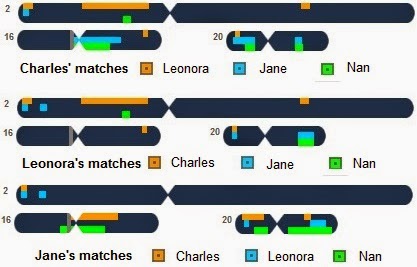 (Chromosome 20 seems to be where these lines match mine and Uncle Selig's, but I am not ready to go there just yet.)

Leonora is not part of the matching group on chromosome 16, but that need not be a problem.

As far as I am concerned, the DNA is more than satisfactory to make our point.

Last week I mentioned that I was concerned by the fact that there are no given names that appear in both families. In fact, Berisch has a son Volodya and Charles has an uncle William (Wolf Ber). This however is a false match because William is named for his paternal grandfather Wolf Ber Orenstein, not someone in common with Berisch's Pikholz line.

There is another point which bears mentioning. We know from birth records that the mother of Sara (the great-grandmother of Charles and Leonora) is Jente, a name which carried to Leonora's grandmother. We have no information on Berisch's mother's name, but I do not see any Jente or similar among his descendants.

It is of course possible that Berisch is from a first wife of Moshe Hersch and Sara is from a second, but I think if that were the case, there would be less matching DNA (between Charles and Leonora on one hand and Nan and Jane on the other) than there is. 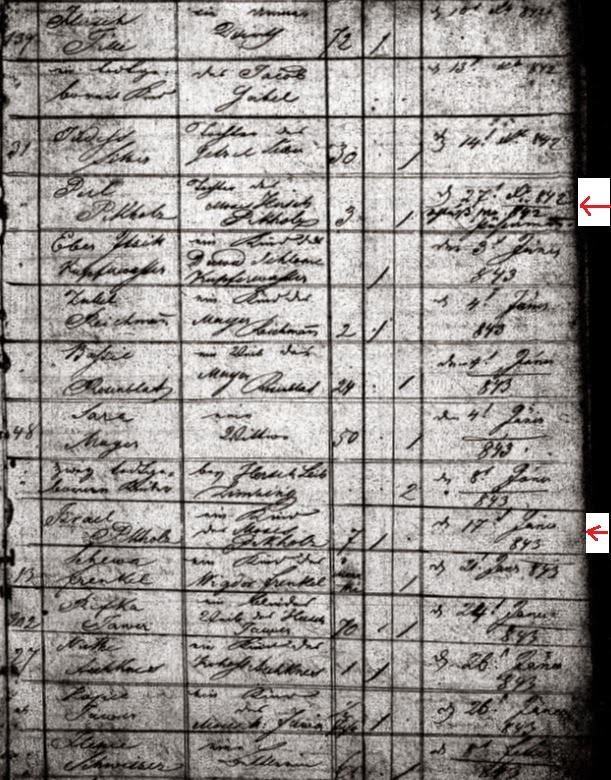 In this case, I have no idea where such a piece of evidence might come from. The only pre-1859 records we have from Skalat are deaths for 1827-1845. Those include one or two deaths of children who may be siblings of Berisch and therefore Sara.

Perl Pikholz, daughter of Moses Hersch, died 27 December 1842 at age three. No house number is listed. This sounds very much like a younger sister of Berisch.

On the same page, Israel Pikholz, son of Moses, died 17 January 1843 at age seven. This may be an older brother of Berisch, but then again, sometimes Moses is just Moses and this is a different family.

Neither of the families we are looking at has a child named Israel, but Sara has a daughter named Perl, which may or may not be after the child who died in 1942.

So before formally merging the two Moshe Hersch, I'd like to find one more bit of evidence.

Housekeeping notes
We now have eleven Family Finder tests on order for Pikholz descendants. The most recent is one from a family that I have been after since we began our project. That is the family which I call TONKA and which I believe to be descendants of Nachman Pikholz (~1795-1865). Although I would like to have two or three people testing from this family, I'll settle for what I can get, for now.

Steve Pickholtz, cousin of Jane and Nan, is now a co-administrator of our project at FTDNA.
Posted by IsraelP at 12:46 PM