How Many Husbands Did Ethel Pikholz Have?

This Aryeh Leib was a contemporary of Aryeh Leib the son of Nachman and both may have been named after a common ancestor.

All we know of Chaje Ester is that she married Uscher Rosenblatt, that they lived in Kopicienice and that they had three children who did not live thirteen months. 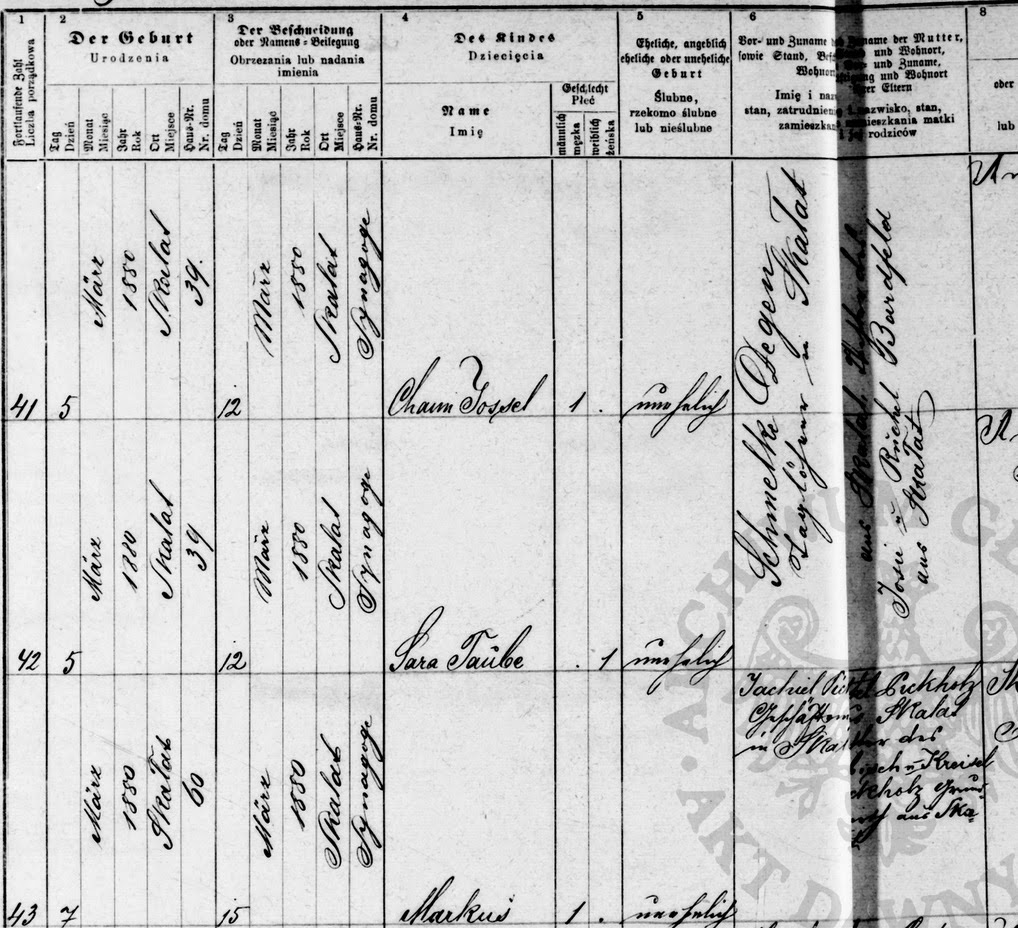 Ettel had a son Markus in Skalat, 7 March 1880 and the father is identified as Jachiel Pikholz. 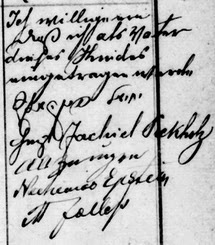 Jachiel acknowledges paternity with his signature in both Hebrew and Latin letters.

We next find Ettel sailing to the United States, destination Iowa, in 1890. Her name is now Madansky, she is twenty-nine years old and she is travelling with eight year old Max and four year old Sara. The names and ages are not quite right but we know from US documents that this is the same Ettel. She settles in Omaha and in 1892, Harry is born to her and Edward Elias Madansky.

The 1900 census shows the family in Detroit. Etthel (as she now spells her name) has a sister Minnie Kaplan who arrived in Omaha in 1893 and remained there. A son of another sister, the eldest Rivke Reizel Schapira, also lived in Omaha for a time. But the Madanskys left and moved to Detroit.

The census has correct birth years for Etthel, Max and Harry and we have no way to confirm the years for Elias and Sara. Etthel is listed as being born in Russia to Austrian parents, which we know to be only half correct. The census tells us that Max was born in Austria and Harry in Nebraska, both of which we know to be correct, and Sarah in Russia.

In the 1910 census, Ethel (with one "t") is a widow in Detroit and is correctly identified as having been born in Austria.

In 1910 Sarah is living in Illinois, in a household consisting of her husband, H.H. Madansky, their son Seymour and her brother Harry Madansky. Sarah and Harry are both identified as having been born in Nebraska. H.H. is also Harry.

I shall spare you, dear reader, all the detail, but this family is all over the map. Max too has documents claiming he was born in Nebraska, when we know he certainly wasn't.

Sara's 1950 San Antonio Texas death certificate once again has her born in Nebraska and her father as Edward Madansky. Her husband, H. H. Madansky is now known as Harry May. These are the May department store people, whose name change triggered an infamous anti-Semetic essay by Henry Ford in 1921, which I am loathe to link here among respectable company.

So how do we sort out this family? Max/Markus is the son of Jachiel Pikholz. Harry is the son of Elias Madansky. Sara could be the daughter of either - remember Ethel was already Madansky on the passenger list and both Max and Sara are called Madansky as well.

All this is complicated by the fact that a May family tree at Ancestry.com which is full of errors (Elias Madansky died in 1897, for instance, while at the same time appears in Detroit in 1900), tells us that Elias (Edward) Madansky's Jewish name was Yehiel. This raises the possibility that Jachiel Pikholz, the father of Max Madansky is in fact Jachiel (later Edward and/or Elias) Madansky.

As Ethel Madansky is married in Detroit in 1900 and widowed there in 1910, I have been assuming that her husband died during that time and is buried in the Detroit area. But I have never found anything.

The May tree at Ancestry also gives a death date for Ethel in 1935 in California, but with no sources or place of burial.

I had a theory based on Jachiel's being a Pikholz. Perhaps a son of Uncle Selig. The given name Jachiel had shown up a number of times in the Skalat families, creating the impression that there might be some common ancestor.

Max has a male-line descendant I am in touch with intermittently, so at the very beginning of the DNA project, I got him to do both an autosomal (Family Finder) and a Y-37 DNA test. He has a lot of matches with the rest of the Pikholz families, as one would expect from someone with a Pikholz-Pikholz marriage in the background. But his Y-37 was no where near the three matching Y-37 that seem to delineate the Skalat Pikholz families. So maybe Jachiel is not a Pikholz, but a Madansky, and Max, Sarah and Harry are full siblings..

A few days ago, I went back to look for death and burial information for Ethel and Elias. 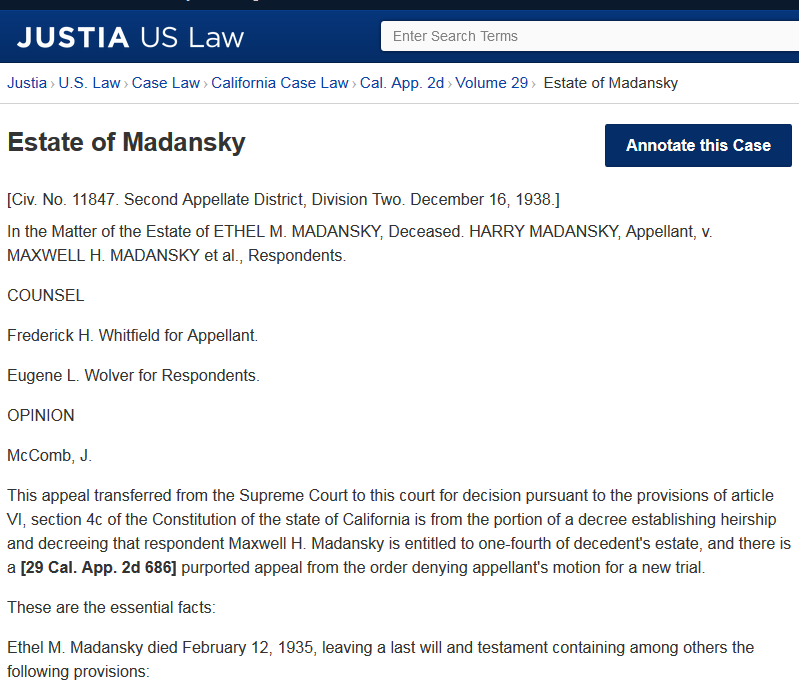 The date of death cited here matched the Ancestry tree and I already known that Markus/Max had become Maxwell.

But I couldn't get past that.

I was having serious doubts about my ability to solve this with my own research, which often has more than its share of inadequacies. So I turned to my friends on Facebook and at JewishGen.

My first break came courtesy of Bob Wascou, who sent me a link to the death index on Family Search. The actual index. There was Ethel. With her name misspelled. Mandansky.

I asked Pamela Weisberger where are the first places she would look for a 1935 LA burial. She gave me five cemeteries. I wrote all of them Friday. After Shabbat I found a positive response from Home of Peace. Now to get a photograph. We have two other couples there that I want.

Barbara Zimmer checked in with a long list of references, some I had seen, some I hadn't. The waters were truly muddy.
André Günther said he saw a 1903 divorce. There it was, right there on Ancestry.

Unless maybe Jachiel Madansky's mother might have been... Nah. Too complicated. let's not even get into that.

Housekeeping notes
Two more Pikholz familiy Finders so far this week, this time one on the Rozdol side. Plus both Ancestry and 23 and Me tests for Aunt Betty and one of her sons.

And a Kwoczka Family Finder. I'd like some more of those.

And one of my Rosenbloom cousins has ordered both Family Finder and Y-37.

Only a few more days left.there are a few more people I would really like to bring into this project.
Posted by IsraelP at 1:07 PM