Uncle Selig - again
One of the linchpins in my Pikholz research has always been a note from father that his grandfather had had an uncle, Selig Pickholz. I discussed Uncle Selig at some length here, here, in my Avotaynu article about Geni and at 31:57 in the recording of the panel discussion about online collaboration at our recent conference.

Here is our starting point, based on the records we have and the the fact that the only mentions of any Selig Pickholz in records are the births of Markus and Fischel Zeiler, the marriage of Fischel, the death on Marcus Pickholz and the birth of Izak Josef Pickholz.

There is one Uscher (=Asher, the Hebrew counterpart of the Yiddish Selig) Pikholz born 1885 but he is in a different corner of the family.

Uncle Selig's putative brother Berl had many children, and a number of his descendants are called Isak Josef. Like my grandfather's brother and the "original" Isak Josef, these are known as Josef, without the Isak. I am in contact with a very few descendants of Berl.

But Uncle Selig's line pretty much ends here. The two Zeiler sons both married and Markus had a daughter Bertha in 1896, but that's all we know. Then they disapper.

Perhaps grasping at straws, I considered that the similarity between Uncle Selig's wife name - Kaczka - and my great-grandmother's name - Kwoczka - hinted at a relationship that would have made Uncle Selig doubly connected to my great-grandfather, but that was never really convincing.

"George"
His name is not really George, but I'll call him that because some of his family members have privacy issues that might be considered extreme. George is a Pikholz descendant whose family is described in the chart below. he did a DNA test last year and although he had a few fairly close matches - including with my father's sister and first cousin - I was not able to get a sense of his place in the overall family. He had relatively few matches altogether but that was due in part to the fact that his mother is not Jewish, so does not bring endogamy into play from her side.


A few weeks ago, in the course of an inquiry George was making into the life of his Aunt Anna, he came across a handwritten Polish document dated 8 July 1929, which was labeled "birth certificate equivalent." Attached to it was a typewritten version. He sent it along to me for comment. He felt it must have had something to do with his father's schooling as he would have been eighteen at the time. 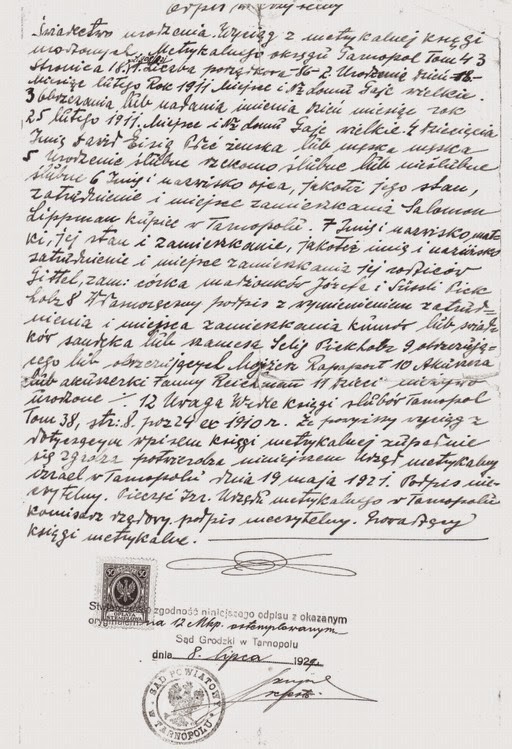 Polish records are harder to work with than Galician records, because they are generally formatted as straight text rather than the columns mandated by the Austrian government in Galicia.

But once I saw the typewritten version, it was simple.

This was the Polish version of the original Galician document, complete with the numbers and Polish-language headings at the top of each column.

It was pretty much standard information, nothing I didn't know. Except column 8. The "sandek or witness" was Selig Pickholz. One of the ancients had suddenly appeared in a 1929 document, that was essentially a transcription of David's 1911 birth record.

I mean, this was hardly likely to be some other Selig. We know of no other Selig. In 1911 he would have been in his eighties, not unheard of, but not where I would ever have expected to see him.

Is David's grandfather - George's great-grandfather - Uncle Selig's son Isak Josef, the one born in 1862? Dropping the Isak to become Josef would be no surprise - that's what they all did. His first son Maurycy was born in 1881, when Selig's Isak Josef would have been just past his nineteenth birthday - but his wife was born about 1864, so 1862 would be perfectly reasonable.

Josef has a granddaughter Chana and another Anna - perhaps named for Uncle Selig's wife, their great-grandmother.

So George would be my fourth cousin and Uncle Selig has living descendants. Maybe. And we have his DNA. Maybe.

Is there a way to be sure?

The truth is, it's been awhile since I took a close look at George's matches and we have had new results in the last few months.

I guess that's about what we should expect from a fourth cousin.

I truly think this is right. But we do not quite have the documentation. Uncle Selig could have been the sandak for David without having been his great-grandfather. He could have simply been an esteemed, very old relative. But I don't think so. I think we have it right. I'd like to see one more bit of evidence. I cannot imagine where it might come from.

Why my father knew - revisited
This gives a new direction for the question why anyone ever told my father that his grandfather had an uncle Selig.

Uncle Selig was probably in his early eighties when David was born in 1911. My father was born twelve years later.  If he died in his mid-late nineties when my father was young and it was mentioned at home, my father might well have remembered. That kind of event makes an impression even on a child of four or five. Perhaps he even reached a hundred and that generated some talk in earshot of the young child.

I do not know that a death record for Uncle Selig would fill in the blanks, but it seems to be the next document to look for.

I am also interested in some additional DNA support and have asked several people close to George's side to consider testing. One has agreed thusfar, though has not actually done it.