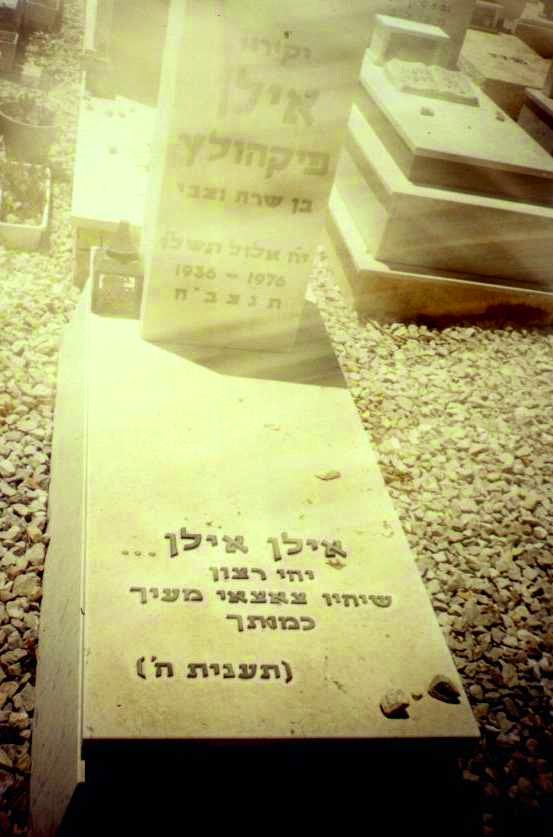 The eighteenth of Elul, which falls this week, is the thirty-eighth anniversary of the death of Ilan Pikholz, of Netanya. He was nearly forty.

Ilan is the older brother of Dalia, whom I have mentioned from time to time, generally in the context of DNA matches and analysis.

The younger of Ilan's two sons was the first person in our family DNA project, but I have rarely mentioned him because his test was a Y-37 (male line) rather than the autosomal (Family Finder) that everyone else is doing. That Y-37 test has been of critical importance as it is a perfect match both for my own Y test and for the Y-37 of the only male-line descendant of Nachman Pikholz (1795-1865).

But today's story is about Ilan's birth record, as seen through his Mandatory Citizenship file.

When the British Mandate mercifully ended with the establishment of the State of Israel, they turned over the files of those who had become citizens during the time of the Mandatory Government. Not all of them, only those from some time in 1933. And only about seventy percent of those.The existing files are held by the Israel National Archives here in Jerusalem. The whole set of files from 1933 are indexed on cards, arranged by surname. The fourteen thousand plus files from before 1933 are not even indexed.

The fourth line on the card shown Ilan, born 1936 in Hadera in file number 43356, with a note that his name was changed from Ilan Stern. What's that all about - and why, if he was born here in Hadera, was there a citizenship file at all? 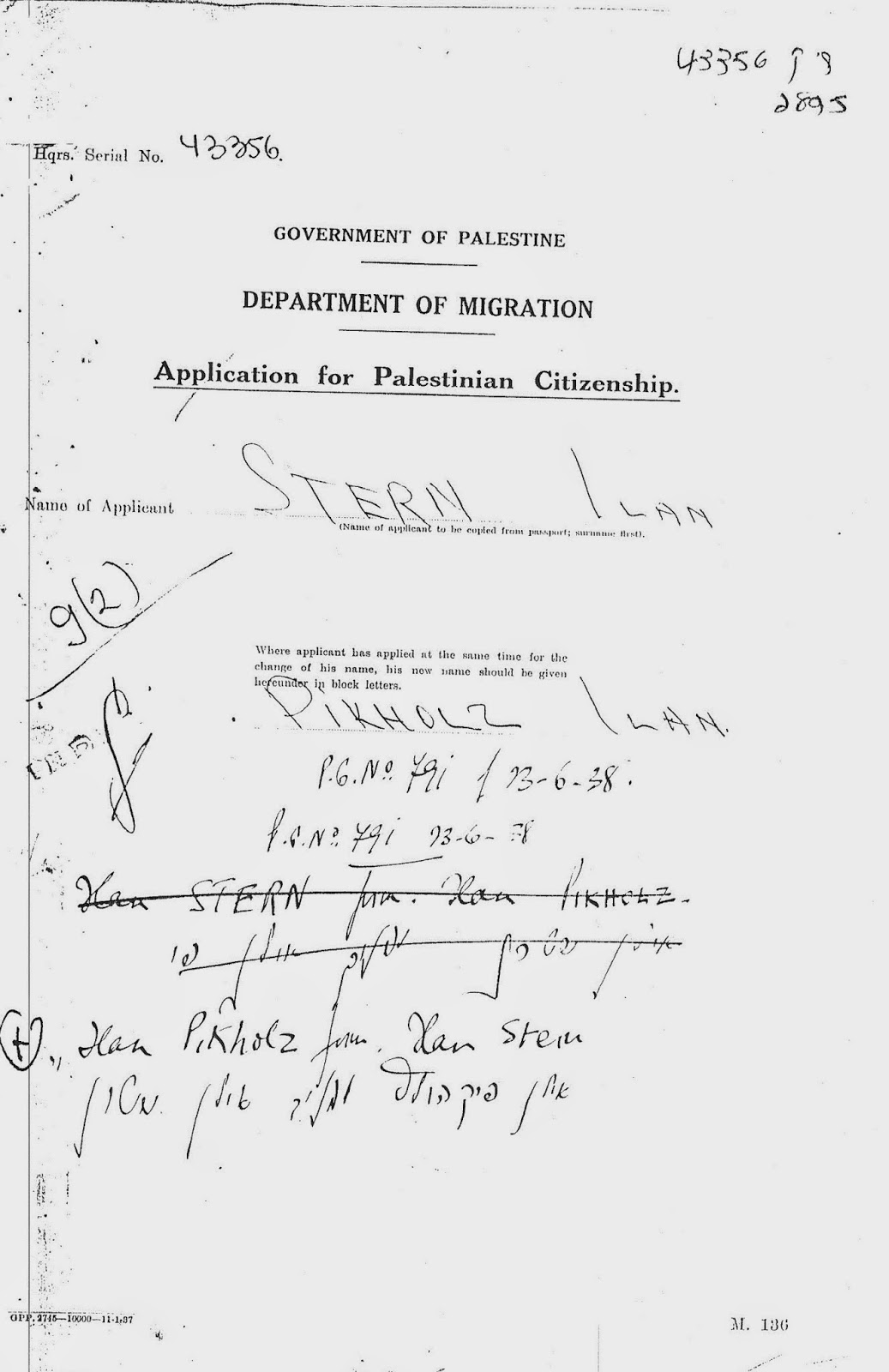 But we know that Ilan and Dalia's parents are Zvi and Sarah Pikholz. Sarah's name was Kaner and Zvi's mother was a Leiter, so where does Stern come from?

There is nothing unusual about the birth certificate, shown below. Ilan was born in Hadera, 27 October 1936 to Zvi Pikholz age 30 and Sarah Pikholz age 26. The birth was registered on 14 November.

The Government of Palestine issued birh certificate number 102223, with everything recorded in both Hebrew and English. What could be simpler? 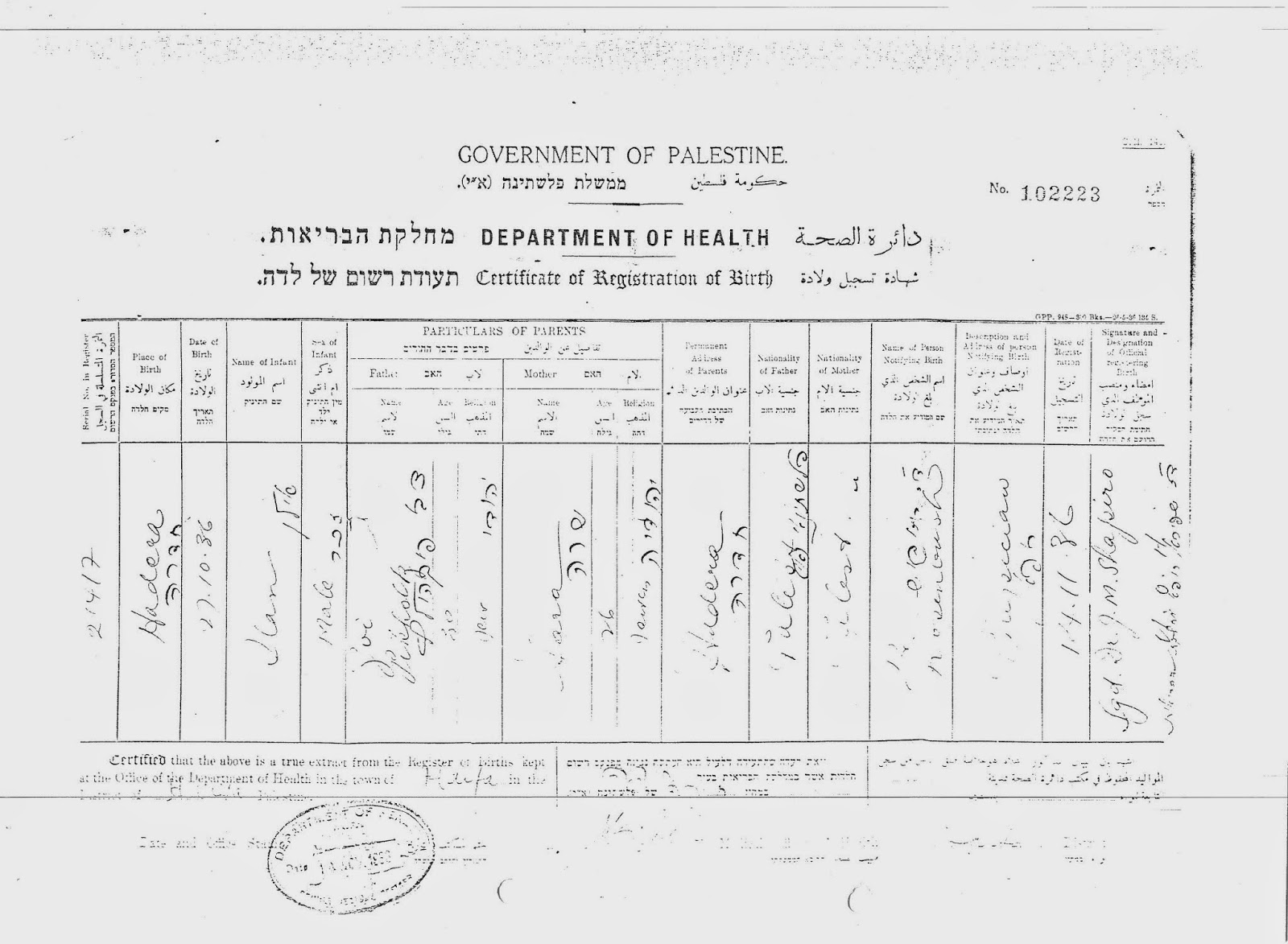 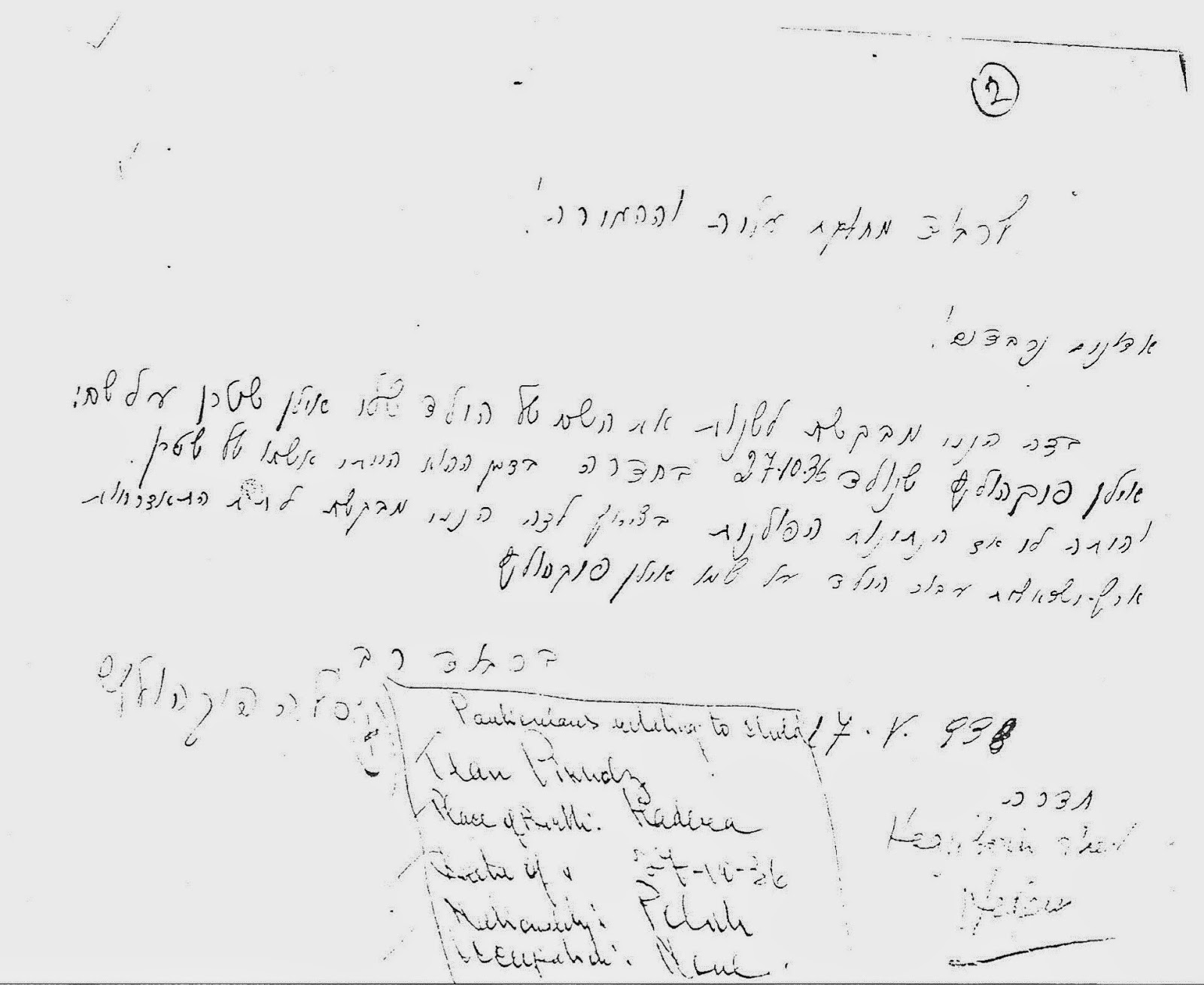 The file contains a letter dated 17 May 1938 from Salah (Sarah) Pikholz saying:

I hereby request to change the name of the child Ilan Stern to Ilan Pikholz, born 27 October 1936 in Hadera. At that time, I was married to Stern and he was a Polish citizen. At the same time, I request that you grant citizenship of Eretz Israel to the child, under the name Ilan Pikholz.

So this Stern is the father and he was not a citizen, so Ilan needed citizenship of his own? But we have the real-time birth certificate and the parents are identified as Zvi and Sarah Pikholz. Not Sarah Stern.

Another document in the file - dated 17 May 1938, the same day as Sarah's request for a name change - tells us more. 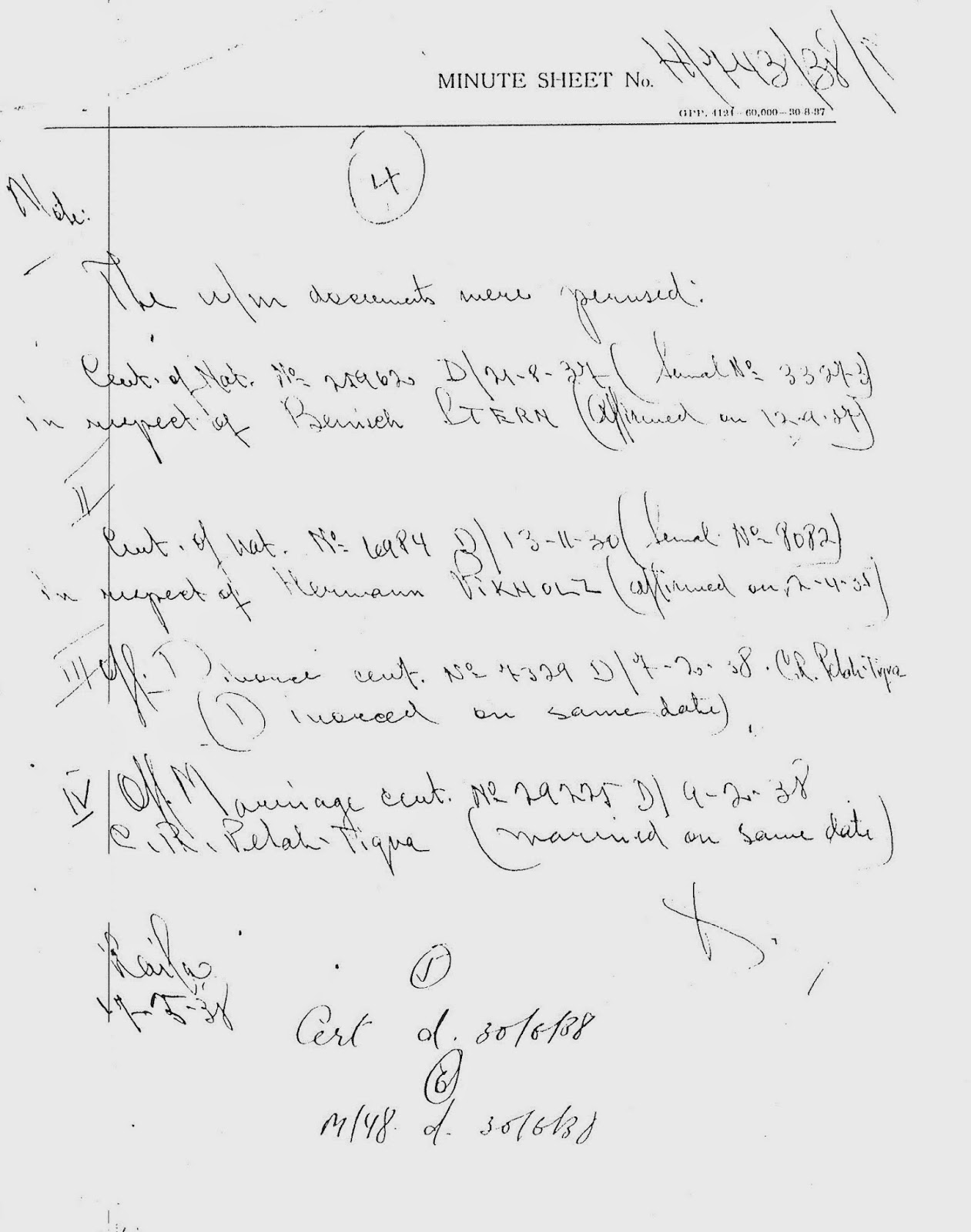 This "minute sheet" cited four additional documents which were presented in support of the request, but which are not themselves in the citizenship file.

1. Certificate of Naturalization for Berisch Stern, dated 12 August 1937. [This was after Ilan was born - IP].

3. A divorce certificate issued in Petah Tiqva on 7 February 1938.

4. A marriage certificate issued in Petah Tiqva on 9 February 1938.


This was all very odd, to say the least. Sarah was married to Berisch Stern when Ilan was born, but the birth certificate identified her as Pikholz. If Zvi Pikholz was indeed Ilan's father, as indicated by the birth certificate, then why did Ilan need to undergo naturalization - Zvi had been a citizen since 1930!

And what was I to do with this? I couldn't just make a copy and send it off to Dalia without knowing what she knew of all this.

I phoned her husband, whom I have known since we both lived in Arad. He laughed.

The story, he told me, was typical of many from the days of the British Mandate. Jews could only immigrate if they had certificates and the British had severely limited those, despite the terms of the mandate granted them by the League of Nations to facilitate Jewish immigration.

Berisch Stern had a certificate and Hermann (Zvi) Pikholz did not. So the only way Sarah could enter the country was to present herself as the wife of Berisch Stern. It was a sham marriage, of course, and she was actually married to Zvi all along. Ilan's birth certificate reflected exactly that. But the naturalization authorites had to deal with the marriage to Berisch and the implied Stern surname for Ilan.

Everyone was party to the fiction and from mid-1938 it was all above board. And we know all this was a sham - because Ilan's son's Y-DNA is a perfect match for mine.

We had nothing at all in common, but we were fast friends. The first three years, I lived in Yeroham and he in Arad. Then for the next eleven we both lived in Arad. We no longer worked together but we arranged to do civil patrols together. Arad became history for both of us and we spoke less frequently. But I would always call or send an email the week of his bar mitzvah.

I knew his wife and kids a bit. He and his wife were a couple from fifth or sixth grade.

This year, I wrote to Dov's widow, just to say that I am thinking of them. He would have been seventy-two. He was my friend.
Posted by IsraelP at 7:30 AM