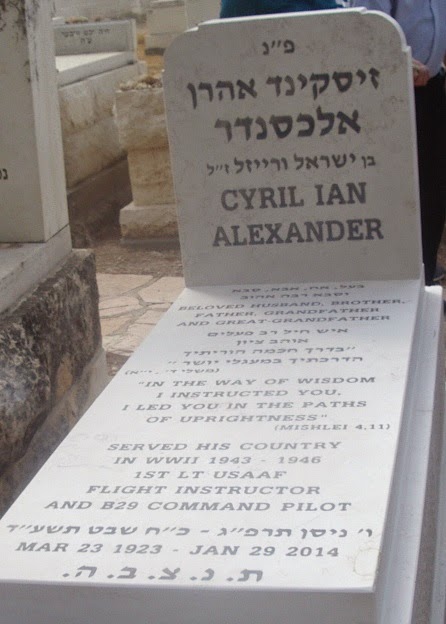 The week began last Friday (well, weeks don't begin on Fridays, but you know what I mean) with the unveiling of the tombstone of Ian (Ziskind Aharon) Alexander, a second cousin of my mother-in-law on her mother's side. The burial was in the Eretz HaChaim Cemetery in Bet Shemesh about eight months ago. As the family is divided between Israel and the US, the unveiling was set to coincide with Yair's wedding. ("Divided" is definitely not the right word, as you will see presently.)

Though a Zionist all his life, with half of his family living here, Ian was not sure he was entitled to be buried here. It  was not a legal question, of course, but a question of "what was right." This modesty of his was a subject of eulogies both at the funeral and at the unveiling. 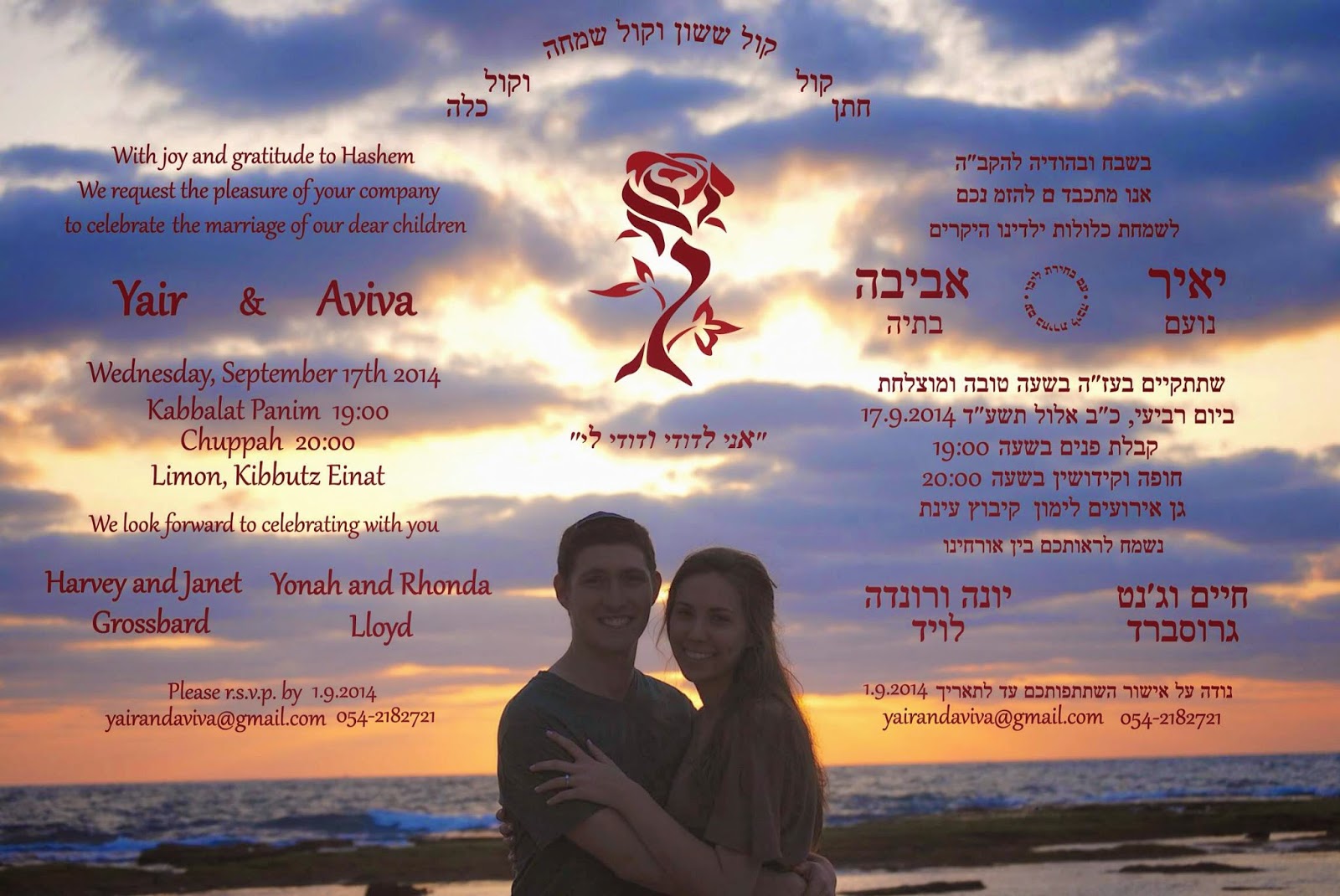 Yair and Aviva were married Wednesday evening. Yair is the son of Janet, the youngest of the Alexander children, and her husband Harvey. He is the first of Janet and Harvey's to be married. Both families immigrated from the US and the wedding had an ummistakable American flavor, though the overly-loud Israeli band seems to be unavoidable. Both families live in the same mid-sized suburban community (its website says 550 families), one that is often inaccurately stereotyped as being full of "rich Americans."

The third family event of the week was the aliyah of Edna, Ian's wife and the family matriarch, from Elizabeth New Jersey. She will be living quite near Janet and Harvey and we all wish her a successful integration into Israeli life.

Edna and Ian were married nearly sixty-seven years. They raised four daughters and four sons, one of whom is deceased. Three now live in Israel, three in New Jersey and one in California.

Ian's father's mother and my mother-in-law's mother's mother are sisters. Ian himself had been born in London but his parents moved to the US when he was a baby and his brothers were born in Brooklyn.

Edna is New Jersey through and through.

Ian's grandmother arranged the marriage between the childless widower who lived in their building in London and her niece in Poland - my mother-in-law's parents - so it came to be that both Janet and my wife are named for Janet's great-grandmother. When you look at it by whom you are named for, third cousins can be not that distant.

The two oldest Alexanders, Meir and Zahava, came to Israel after high school, not long after my wife's parents moved their family here, so there was some contact between the British and American cousins, but it was not a particularly close bond until the next generation began growing up.

The Alexanders were my first contact with third cousins - certainly not my last - and we learned quickly enough that the particular ordinal number doesn't much matter.

The Alexanders and us
When I took my first genealogy inventory of my wife's family about eighteen years ago, my father-in-law had a fair picture of the family, but not much detail. We made contact with both Meir and Zahava and the rest is history.

Zahava and Reuven's eldest son Esh-Kodesh was getting married soon and we were invited. The wedding of Kodesh and Inbal was our first exposure to the Alexanders. It was an outdoor wedding, so we could hear each other talk. I went from one to another asking questions (the usual genealogy stuff - names, places, dates, who is named for whom) taking barely legible notes and generally making a nuisance of myself. (Who is this guy, anyway!)

Reuven spoke at length under the huppah, with three year old Deror on his shoulders.

The date was 22 Elul 5757. The date on Yair and Aviva's invitation is 22 Elul, though the wedding didn't actually happen until after sundown.

We took an instant liking to Meir and Sharona and while still at the wedding, arranged that they and their four boys would visit with us during Sukkot. We have been back and forth a few Shabbatot since then. There have been more weddings and in between some bar mitzvahs.

Most of their family in the US tries to attend most of the events, so we have gotten to know them as well. (Oddly enough, the first time I met Sam was in the US because he attends the same shul as one of my Kwoczka cousins I was visiting with in New Jersey.)

The solidarity of the Alexanders has always impressed me and their family events were always fun. They usually seat us among the close family. A few others in my wife's family know some of them, but some do not at all.


In recent years, when it was difficult for Ian to travel, Edna would come and someone would stay in New Jersey with him. 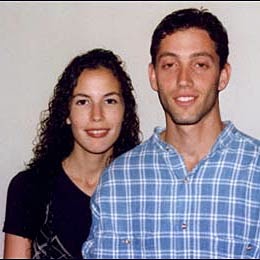 Talia was born about nineteen months after Esh-Kodesh and Inbal were married.

Eighteen months later, Kodesh was murdered by a local Arab while working as a civilian guard in a government office in Jerusalem. It was one of the first murders of what became known as the Second Intifada, which killed nearly nine hundred Israeli civilians and wounded over 5600 more. In addition to soldiers.

We attended the midnight funeral, here in Jerusalem. As I recall, there were a few hundred people. Inbal's father spoke at length. Kodesh was not yet twenty-six. 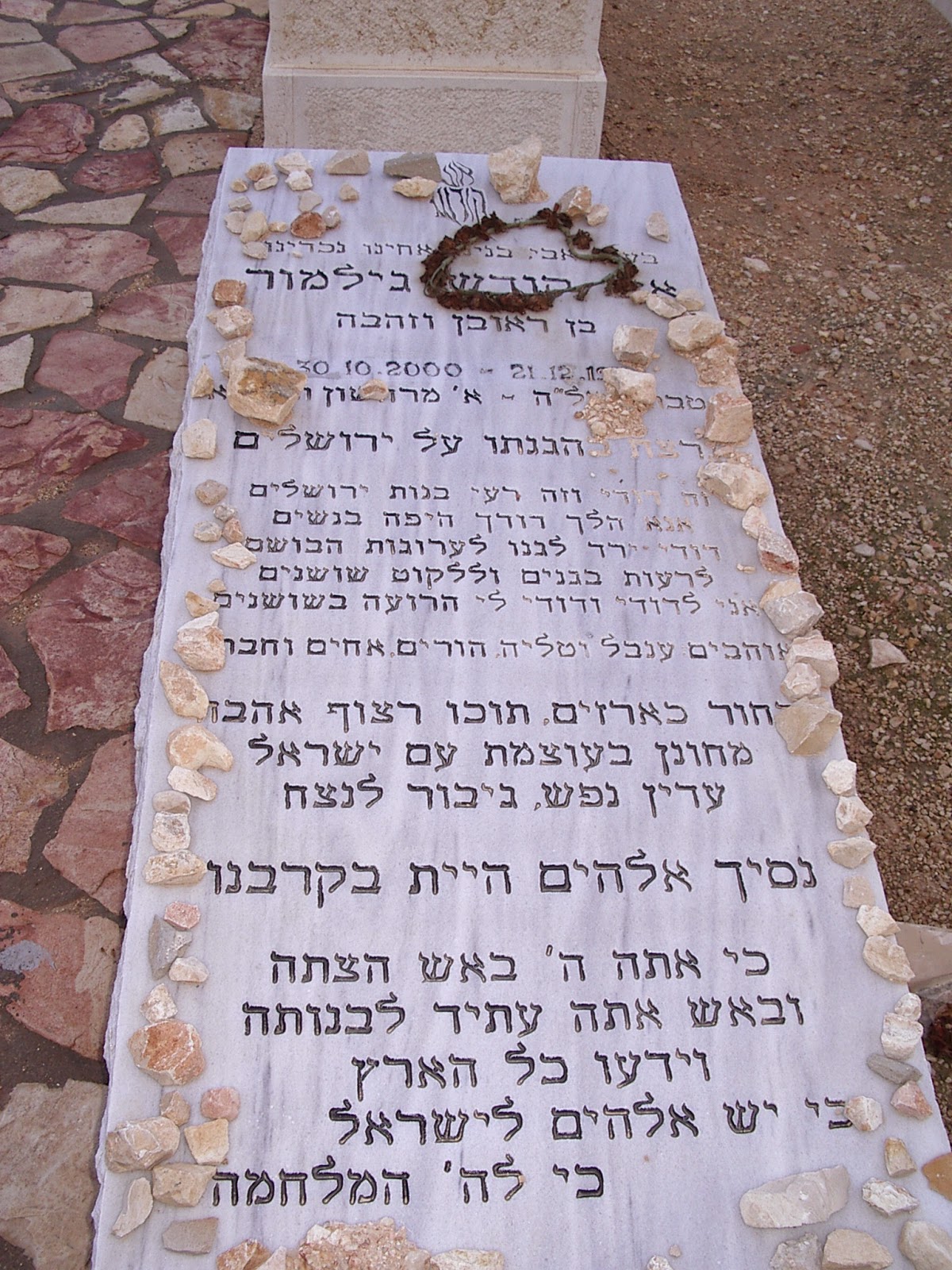 When Inbal married Ofer about a year later, Zahava sent us an invitation, then phoned to make sure we knew it was important to her that we come. ("Which side are you from?" "The dead husband's." A guaranteed conversation stopper.)

We have never been at an Alexander function since, where Inbal was missing. Ofer was there too, most of the time. Including at Ian's unveiling Friday.

At the wedding Wednesday, when I had the idea to write this particular blog, I asked Inbal if she minded my mentioning names. Her reply: "It happened, didn't it?"

Yes, it surely did. Talia is now fifteen.

And now
Pretty much everyone attended the unveiling. Edna, all the seven children and most of the spouses, including the one son-in-law I had never met. Most of the grandchildren living here in Israel were there. And their spouses. And great-grandchildren, some near the grave, watching and listening, others off to the side playing, not understanding what it was all about. A first cousin of Ian's on his mother's side and her family. They had just made aliyah recently. And your humble blogger, a second-cousin-once-removed-in-law.

Harvey ran the service and spoke, as he had at the funeral. Meir spoke, as did Zahava. I apologize for not remembering who else. Perhaps someone from the family can cover that in the comments section below.

Ian had been an airman and a flight instructor in WWII and the service was interrupted three times by helicopter overflights, as though planned.

And Edna, the new immigrant, spoke.

We left knowing we would all see each other again Wednesday. With the Alexanders there is always something in the pipeline. When they go their separate ways, they always seem to know when they will be together again.

(Special thanks to Edna and Janet for allowing me to present this post, using names - not having a clue what I would say about them.)

Housekeeping notes
I hope to be able to stick to my regular blogging schedule during the holiday season. I hope to have enough to say and the time to say it.

In the meantime, may everyone be blessed with a good holiday season and a good year, health and parnassa and may you be written and sealed in the Book of Life.