The Woman Who Matches Etta Bryna

I am posting this on Sunday, the sixth of Nisan, the 118th yahrzeit of my great-grandmother 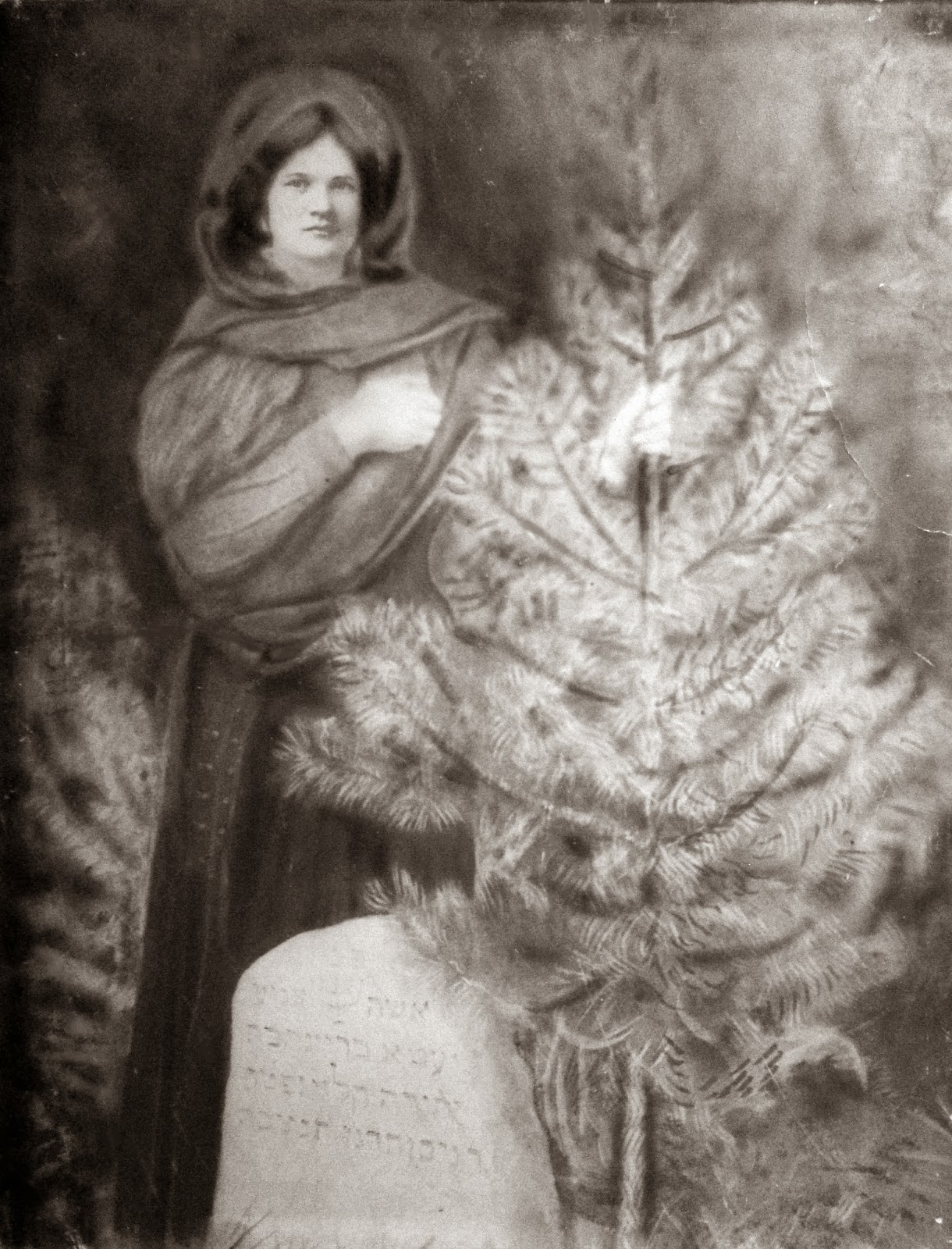 Etta Bryna bat Yehudah HaLevi Rosenbloom. We do not know her maiden name - a subject which I discussed in some detail two years ago.

This is the ancestral line about which I know the least. Even less than what I know about her husband, my namesake, Israel David ben Yaakov Rosenbloom. At least I know his mother's name - Shayna Liba.

In the case of Etta Bryna, we only know what we do because we have a photograph of her grave, with her daughter Shayna Liba standing along side.

Etta Bryna almost certainly died in her mid to late thirties. Her eldest daughter was about eighteen. Her only living son was a few weeks short of his second birthday. Her husband married again soon after she died and the new wife - who had two children of her own - may have discouraged further connections with the dead wife's family.

Perhaps Etta Bryna's family didn't live in Borisov, so seeing them would have involved some effort. Or maybe they were in town and my grandmother's younger brother Uncle Hymen (Chaim Benzion) simply never realized they were his mother's kin. When Uncle Hymen joined Social Security, he wrote "don't know" where his mother's maiden name should have been.

I am sure my grandmother would have known some things about her mother's family, but no one ever asked her.

Today I want to touch on a different side of this problem. DNA testing.

I first dipped my toe into the waters of DNA testing three years ago in connection with the mysterious line of my father's father's father's father. (That may sound trivial, but trust me, it wasn't at the time.) So I decided to order a Y-67 test to see if anyone out there matched my male line.

While I was at it, I decided to do the same thing for the line of Etta Bryna, my mother's mother's mother. The maternal test looks at the mitochondrial DNA which is separate from the 23 pairs of chromosomes we generally hear about.  It passes from mother to both daughters and sons, but only the daughters pass it along to the next generation. MtDNA tends to remain unchanged for many generations, so I decided to pay attention only to perfect matches since my dead end is so few generations ago. The testing company I used is FamilyTreeDNA. I did the test they call "MtFull Sequence," which is the highest level available.

The results came back and I had six matches. I exchanged some correspondence with the six and they were all over the map. My Etta Bryna lived in what is now Belarus and I had these matches with people from places far away - like Hungary. I had no basis for doing anything further and in any case, I had more productive things to do.

Fast forward a year when we decided to begin a DNA project for Pikholz descendants. Most of that project is based on the Family Finder test, which looks at autosomal DNA, the sort that comes undifferentiated from all ancestors. So I did the Family Finder. It was about six months ago when I had another good look at my MtDNA results.

By now I have twelve matches, all from the haplogroup U1b1, like me. None of them gave much information. Two of the twelve posted the basics of their ancestors in what they call a gedcom file. One of those two didn't have enough information to work with. The other went back six or seven generations in a family called Goldberg, in a town named Divin, in the southwest corner of Belarus, about 360 km from Borisov.

Six of the twelve had done Family Finder tests, so I figured that could give me an idea if any of those might be related to be in the more recent generations. Remember, I have no knowledge of Etta Bryna's siblings, so if she had any, their descendants could be as close to me as third cousins - well within the range of Family Finder matches.

Of those six, one was not a match at all - which means that our MRCA (most recent common ancestor) was probably really long ago. Four others showed Family Finder matches likely to be "remote," which generally means five, six, seven, eight generations back. Also not very useful.

One came out close. Well, not  exactly close close, but estimated as a third-to-fifth cousin. For convenience, we'll say fourth cousin. So this could be a descendant of one of Etta Bryna's mother's sisters.  The match is with a woman named Deborah Sirotkin Butler, and I appreciate her permission to refer to her here by name.

Deborah didn't say much about her family on the site, but was receptive when I wrote to her. She is new at genealogy and told me that her oldest maternal name is Margolin (various spellings), from Gomel, in southeastern Belarus about 160 miles (260 km) from Borisov. According to JewishGen, Gomel had some 20,000 Jews in 1897.

No known relative on my mother's side has tested thusfar, but I had a look at my Family Finder match with Deborah to see who else matched both of us. 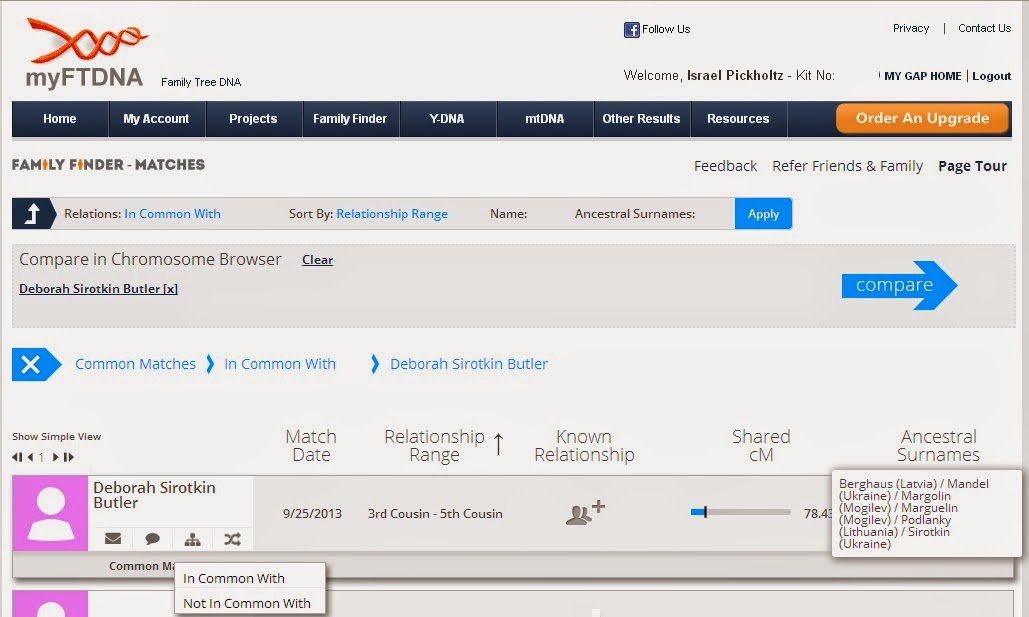 There are 1690 people who have done Family Finder tests and match both Deborah and me. I suppose I could plug all of them into the chromosome browser to see if any of them match both of us on the same chromosome. Maybe if there were one hundred, I'd do it, but not 1690.

Thirty-four of those 1690 are projected as third cousins or better - to me. I don't know how close they are to Deborah. I could ask her to see what all of these are to her, but I am feeling my way in the dark and I think that kind of thing is premature.

But what is curious is that Deborah matches eight Pikholz descendants and my two non-Pikholz Kwoczka cousins, Baruch and Pinchas. The eight include my father's sister and a second cousin of mine, Terry. But not my father's cousin Herb.

On chromosome 18, with me as the background and Deborah in yellow, we see matches with (from the top) Aunt Betty, Terry and Baruch. There is no match with Pinchas here. So Deborah is related to me some other way that includes my Pikholz (or Kwoczka) ancestors - in addition to via Etta Bryna. Part of the "fourth cousin" that FTDNA projects for Deborah and me must be from this other source.

I also looked at the other six Pikholz matches that Deborah and I share. Three do not match Deborah and me on the same chromosomes, so they are not relevant here, for now..

The other three are interesting. (Deborah is purple here.) Robert, who is from Rozdol, matches us on chromosome 12, but Rita's cousin and Jane match us on the same chromosome 18 that my own family matches!

And.... I see that Deborah and I both match with nine of the non-Pikholz who match many of the Pikholz. Of those, there are three who match us on the same chromosome. And those chromosomes are #12 and #18!
Mark (blue) and Alexandra (green) match us on both, but not on the right parts of the chromosome. On the other hand, Debbie L. (yellow) matches Deborah and me on chromosome 12 in the same place as Robert.

Debbie, Deborah and I also have a nice little match on chromosome 8, that does not include Robert.


So that accounts for nineteen of our 1690 common matches. But of course, I am looking for my mother's mother's side, not Pickholtz Project people.

So what next? I am not sure. I have asked several of my cousins on my mother's side about testing, but thusfar none have replied. That could help - both regarding Etta Bryna's family and with her husband's Rosenbloom line.

I think I will open a Facebook group for descendants of Etta Bryna.  If you haven't been invited, look for it. Maybe with some luck, we'll locate a descendant of her older daughter Alta Kaplan.
﻿﻿﻿﻿
Housekeeping notes

I have the three books that my GRIPitt course recommended and I read the first already. It's called FINDING FAMILY: My Search for Roots and the Secrets in My DNA, by Richard Hill. He is an adoptee who describes his quest to find his birth parents. In addition to being an interesting story, it comes with a surprise result which would not have been possible without a little extra bit of testing, after he thought he was done.

I have completed my airline reservations for summer. The major open question is whether I'll be doing my first Shabbat in Baltimore or Pittsburgh. (The other two are in Chicago.) Since I'll be driving from Baltimore to Pittsburgh, I don't have to decide now.

One of my two lecture proposals for the IAJGS Conference in Salt Lake City was accepted. I am happy to say it's the better one and the easier one to update.  The topic is Beyond a Doubt: What We Know vs. What We Can Prove

They also approved a panel discussion called Internet Collaboration: How Do We Share Our Family Trees Online? in which I shall be participating. More on that soon.