Saul and Sam and Sol and Sam (or something)

Here is a little curiosity about a family on which I had done some research. I did not ask their permission to discuss them, so I shall not get too specific or present any documents. I will refer to the person who initiated the inquiry as "the client," though this term is not strictly accurate

The family consisted of five brothers and a sister, born in the late 1890s and the early 1900s, some in Russia and some in the US. The client knew four of the five brothers, whom we shall call B, H, J, and M, but not very well. There was a fifth brother who was referred to as Uncle Sol (or maybe Uncle Saul), whom the client didn't know. and the sister was deceased.

The parents were also long deceased. The father was Shlomo (=Solomon), so it was pretty clear that "Uncle Saul" would have been correct, as Shlomo would hardly have had a son named Sol. Shlomo was called Sam in the US. His wife was Becky, but her Jewish name was not Rivka (Rebecca).

Research into this family was complicated by the fact that their surname is fairly common and not particularly Jewish. The client thought it was not changed significantly when they went to the US from Europe.

By the time I was brought into the picture as a researcher, that generation was long gone and much of the next generation was getting up there in years. So when the opportunity presented itself, I invited myself to the home of a man I'll call "Dave," the eighty-plus son of one of the  brothers. I asked him about his grandparents and their families, where they came from, when they left Europe, etc - and about Uncle Saul.

He filled in the details as best he could. His grandfather Sam died when Dave was maybe eight or ten. He knew Becky well, but there was never any talk about where anyone came from - except "Russia" - or what other family there was. Dave knew that Sam had two brothers, one in the city and one in New York. The one in New York owned a major brand-name company. Dave didn't recall the name of that great-uncle, but knew the names of two of his sons.

As for Uncle Saul, he said that they did not know him well. He lived in New York and was the eldest of the brothers. Older even than the sister. And Dave thought it was not Saul, but Sol, short for Solomon. I asked him how could he have been Solomon when his father was Shlomo and Dave began to dig into his memory, hemming and hawing.

"I think maybe my grandfather was married twice. Or maybe my grandmother was married twice. Or something like that, but Uncle Sol was not a full brother to the others." That made sense to me. Becky had a son Solomon from her first husband and then married a man with the same name. The biggest reaction was from Dave's wife who had not really been following the conversation. "Second marriage?" she said. "What second marriage? We have been married sixty-two years and you never told me that your grandparents were a second marriage."

I turned to Steve' Morse's One-Step search facility to get at the Italian Genealogical Group's database of New York marriages. There were eleven Sol or Solomon with the correct surname. 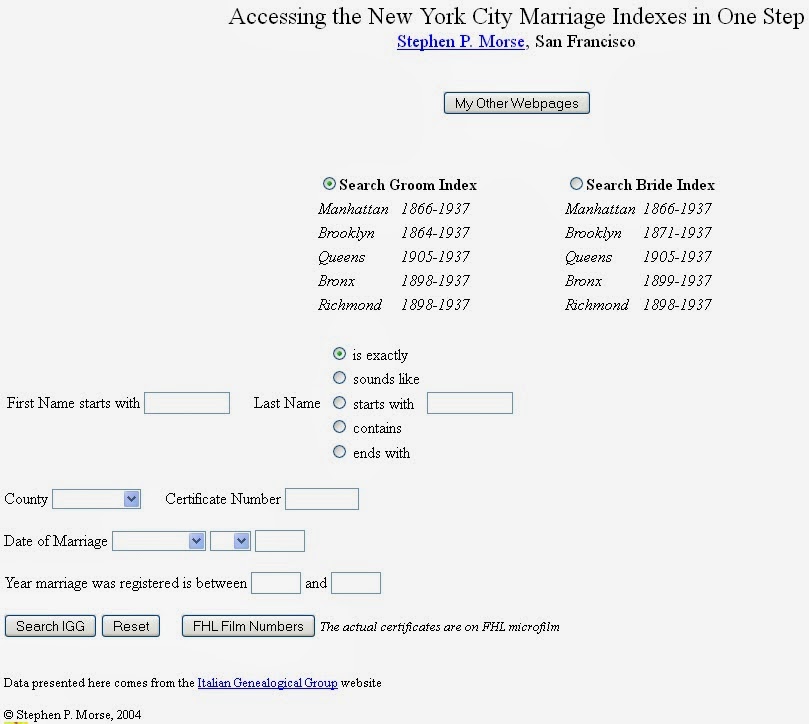 Dave knew Uncle Sol's wife name, so we were able to identify the correct marriage record. I wanted to see whom Sol had named as his parents on his marriage certificate, as well as his place of birth.

I ordered the marriage record from Salt Lake City. Sol named his parents as Samuel and Rebecca, though he did give us a surname for his mother. Maybe her maiden name, maybe the name of a previous husband. And "birthplace Russia."

I did some additional inquiry among Dave's cousins and one thought the family had come from a particular place in the Volhynia province of Ukraine. I looked at the JewishGen Family Finder and saw no one working on any similar surname in that town, but there were some doing work on Becky's surname.