About three months ago, I introduced the family of Zisl Pickholz Kling, late of Kiryat Yam, near Haifa.

Zisl reported that her parents were killed in the ghetto, and we have a record for a man who may be her father, dying in the ghetto, but with no identifying information aside from age 48. That age is reasonable.

The thing is, although we have over sixty pre-War Pikholz descendants named Mordecai and over seventy named Sarah, we have no married couple with these names. (Actually, we have a Moshe Mordecai Pickholz married to a Sara, but she was born 1907, so is too young to be Zisl's mother.)

We know that Jewish marriages were not always registered, so Zisl's Pickholz surname could have come either from her father or from her mother. And of course, the parents could have been born anywhere in Galicia.

As I mentioned three months ago, Zisl's daughter sent me the affidavit that she used in her application for reparations and it opens as follows: 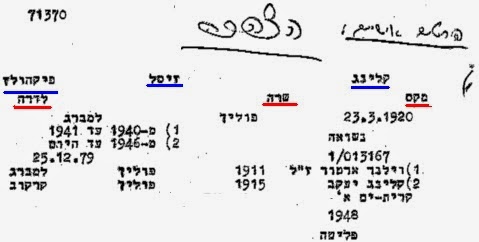 I underlined in blue her name as listed : Kling    Zisl     Pickholz and in red the words: Max  Sara  Ledra, spread out the width of the page.

Max and Sarah are, of course, Zisl's parents. Perhaps Ledra is the surname of the non-Pickholz parent. So I began a search of the surname Ledra.

The first thing that I found on JRI-Poland looked interesting. It was an 1887 birth in Lwow. It was the only listing for "Sara Sounds-like-LEDRA."

Sara Jutte Ladre of Zolkiew and Abraham Jakob Fruchs had a daughter Karolina. What else is there about this couple? I tried Fruchs.

Four more births for the same couple, in 1888, 1892, 1893 and 1894, with the mother's name spelled Ladrer or Laderer. We also have the marriage record. Sara Jutte's mother is Sosche Marjem. Sosche is the same as Zisl. But this cannot be the family of Zisl's mother Sara. Sara would hardly be the daughter of Sara Jutte. I tried some other lookups. First LADRER and then FRUX.

Maksymilian, born 1901. Max. Mordecai. Maybe Zisl's father is the Ladre/Laderer and her mother is Sara Pickholz. Maksymilian would have been nineteen when Zisl was born. A bit young, but possible. But if my suspicion is correct that Zisl was the younger of the two sisters, Maksymilian might really be too young. And besides, we have the ghetto record that shows someone with the same name as dying in 1941-2 at age 48. So maybe not.

But if this is indeed Zisl's father, what Sara Pickholz might be her mother?  Well we really don't have many Sara Pikholz without known husbands, of anywhere near the right age. There is a Sure Feige, born 1903 in Skalat to Leib Sass and Friede Pikholz. There are two born 1904 - Sara born in Rozdol to Aron Fuchs and Itta Chane Pikholz and Sara Lea born in Mikolayev to Markus Pikholz and Blime Jubjener.  But these three would have been sixteen-seventeen when Zisl was born. Maybe, but more likely too young.

Of course, there are missing records. But there's not much we can do about that.

We can always try to get Zisl's birth record, but it would not be in the archives as it is less than one hundred years old. That means a more complicated process and a significant expense. And if Zisl's father is the Pikholz, it would not tell us who he is.

Right now I am thinking that 2020 is not so far away. And if Zisl's sister is older, her birth record would be available earlier.
Posted by IsraelP at 7:30 AM