The following email landed in my inbox over the weekend. 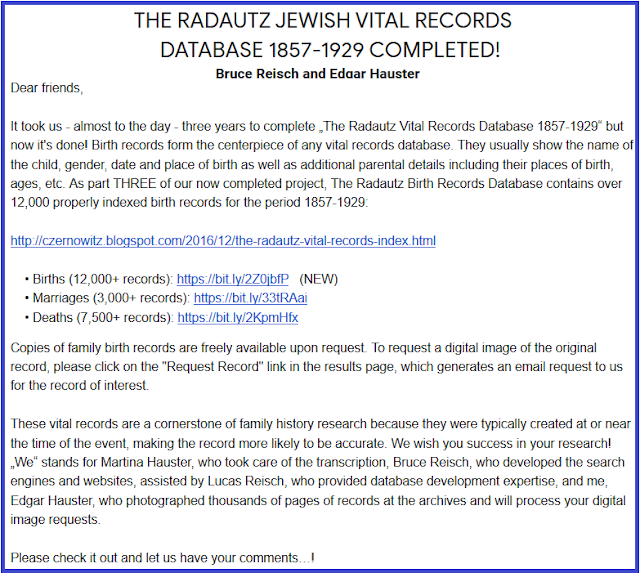 For those not familiar with the area, Radautz 47°51' N 25°55' E is 31 miles (50 km) south of Chernovitz. Both are in historic Bukovina which is just south of east Galicia. It was part of the Austrian Empire but now the two towns are on opposite sides of the border between Ukraine and Rumania. 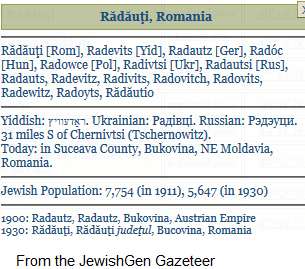 We have two Pikholz families who lived in Radautz, both of them descendants of  Mordecai and Taube Pikholz of Skalat. Mordecai is almost certainly the brother of my great-great-grandfather.

Moshe and Freide Pikholz
Mordecai and Taube's daughter Chane Chaje (~1823-1896) was married to a man named Eliezer (~1822-1878) a Levi who went by his wife's surname - we do not know what surname he was born with.
Eliezer and Chane Chaje's (first-born) son Chaim (~1849-1910) had eight children that we know of, one of whom is Moshe, who married Friede Kruk of Radautz and at least some of their children were born there. Four of those birth records are included in this project.

Moshe and Freide's son Leiser came to Israel and I know his two children. Moshe's other children were killed in the Shoah. The interesting thing that we see in the index is that Freide is called Kruk/Kruck (pronounced Krik) on three records, but is Ellenberg on the 1906 record of the daughter Chane Chaje. My first instinct is to say that Freide's two parents are Ellenberg and Kruk, though it is not clear which is her father and which is her mother. At least not from the index. 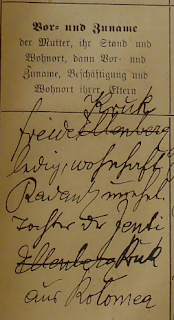 The actual records clarify it for us. Leiser's birth record shows Freide's surname as Ellenberg, but that is crossed out and Kruk is written in its place. That sounds to me as though Ellenberg is her father and Kruk her mother and someone realized afterwards that their marriage was not registered. They are from Kolomea.
The record of the youngest of the four - Raizie Mindel - specifies that Freide's parents are indeed Israel Ellenberg and Jente Kruk.

Freide's own birth record does not appear in the Kolomea records, but her sisters' do. And her mother Jente's 1911 death gives the names of HER parents.

Benjamin Hersch and Rivka Bernstein
I have not seen any relevant death records in the Radautz database, but there are some marriages and in particular this:

Benjamin Hersch Bernstein, born 1876, married Rifke Pikholz, born 1877. Rifke is the daughter of Chaim Jankel and Gitel of Olsowze. We know Chaim Yaakov (Jankel) and his wife as the head of our Buczacz family. Chaim Yaakov is the son of Mordecai and Taube Pikholz of Skalat.

I do not see a listing for Olsowze in the JewishGen Gazeteer, but there is a village called Olesha 49°07' N 25°16' E, which is 6.5 miles from Buczacz which could be the right place.

We know of five children of Benjamin Hersch and Rifke - Chaim Juda, Rachel Ziwje, Isak, Abraham and Gitel - and the Radautz database has all five birth records.

These five records confirm what we already know and do not add  anything knew aside from the births themselves. I had been hoping to find the surname of Rifke's mother Gittel.

The Bernstein clan lived in Radautz and the children of Benjamin Hersch and his brother have given names in common, so it will take a bit of additional analysis to identify the next generation in the Radautz records. (Note to self...)

I have had contact with a few descendants here in Israel, but they have been singularly uncooperative.

I really appreciate the work of Bruce, Edgar and their team in getting this material transcribed and making it available at no charge.