Lydia and Inna are second cousins of mine on my mother's mother's side. They are first cousins to one another. Their grandmother, Alta Rosenbloom Kaplan, is the older sister of my grandmother Sarah Rosenbloom Gordon, who remained in Russia when her sisters and brother went to the US before the First World War.

Lydia's DNA results came in two months ago and Inna's this week.

We now have autosomal DNA from thirteen Rosenbloom second cousins: Lydia and Inna from Aunt Alta, Beverly, Beth and Sam from Uncle Hymen and my first cousins Kay and Leonard, my four sisters,  my brother and me from my grandmother Sarah.

I hope to take DNA from two more of Alta's granddaughters when I visit Moscow next month.

Two of Lydia's matches with the second cousins are over 420 cM. Eight more are between 342 and 387 cM. One is 286 cM. Compare these to the ISOGG definition of second cousins - 212.5 cM - and Blaine Bettinger's Shared cM Project's average of 238 cM and we see that Lydia's matches are much higher than expected. If it were just the vagaries of DNA, some would be higher and some would be lower, but that is clearly not the case here.

So the answer must be Jewish endogamy. All Jews, being related multiple ways, have much larger matches than the general population.

This appears to be a much more normal distribution, with less influence from Jewish endogamy.

With that, Inna has between three and six matches of over 20 cM, on eight segments with the second cousin group, including matching segments of over 50 cM.

It follows that one of Lydia and Inna, daughters of brothers, has a much greater influence from endogamy than the other. And if I were to tell you that one of them has a non-Jewish mother, hence much less endogamy, you would say that it must be Inna.

You would be wrong. As I was. 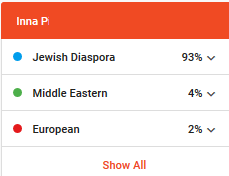 Inna's mother is from a normative Ashkenazi Jewish family. FTDNA's MyOrigins calls her 93% Ashkenazi Jewish, typical of our family. There should be lots of endogamy here.

Lydia's MyOrigins shows her to be 45% Ashkenazi Jewish and 46% East Europe non-Jewish, plus some fragments. The normal sort of background endogamy is missing, so I fully expected that Lydia's large matches with us were a result of a close cousin relationship between her Rosenbloom grandmother and her Kaplan grandfather.

If that were indeed the case, Inna's matches would be even larger because she has both the supposed cousin grandparents and the standard, garden-variety Jewish endogamy. But she doesn't. So she doesn't.

Why? Beats me! More important, why does Lydia have these big numbers? What else is going on here? It looks much too large and much too skewed to be "the strange ways of DNA." (Lydia's best match with the cousins is with Kay, whose faher also has no Jewish DNA.)

I cannot wait to see what the Moscow cousins have. One of them is Inna's sister, the other a first cousin to Inna and Lydia. So unless anyone has some suggestions, I expect to revisit this at the end of August. 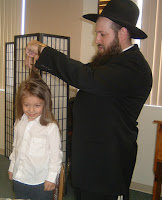 Also, my son in Chicago is making his next bar mitzvah the first Sunday in May. If any program directors are looking for something around then, please drop me a note.
Posted by IsraelP at 8:32 PM