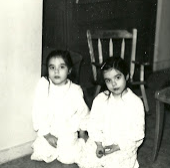 My nephew Avi's Family Finder results just came in. Avi's mother - my sister Carol/Devorah - was killed in an auto accident thirty years ago. But she and Judith are identical twins so we have her DNA. Except for the astigmatism and later the glasses, you could not tell them apart.

But Judith wanted to know what the DNA would say so we ordered Family Finder tests for Avi and for one of Judith's sons Eliezer. Eliezer's was delayed in the mail - or in FTDNA's mail room - but should be along in two or three weeks.

These are Avi's matches with his mother's six siblings. 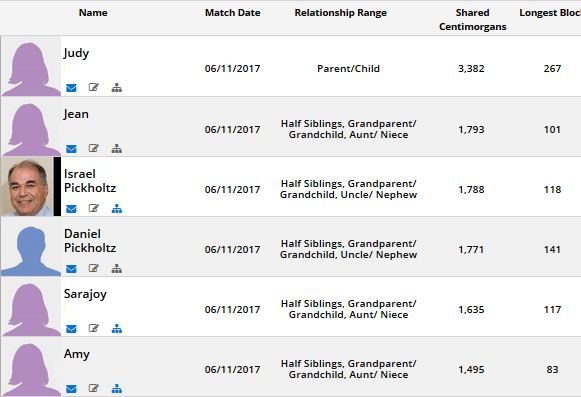 FTDNA accepts him as Judith's son, as expected.

When I looked at the six of us against one another a few months ago, I saw that Amy is not as close to Judith as the rest of us. This shows up in Avi's match with Amy as well, both in the longest segment and in the total.

On Avi's chromosome browser, I see tiny breaks in chromosomes 3 and 8, so I assume that is what is missing from the 3384. In any case, this layman doesn't see anything that implies anything special about the twins.

After I get Avi on GEDmatch and see Eliezer's results, I'll have another look. 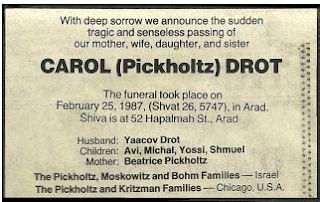 Housekeeping notes
I'll be speaking on the Hebrew version of
Lessons in Jewish DNA – One Man’s Successes and What He Learned On the Journey
on 19 June at 6:30, for IGS Rishon Lezion, Museum of Rishon Lezion, Ahad Ha’am 2.
Posted by IsraelP at 2:29 AM