Blogger deleted the first version of this while I was writing it. So I'm trying to recreate it.

Procrastinatiion
A few days ago, I received the following remarkably non-specific inquiry, of the sort I receive several times a week.


Hi, your gedmatch kit came up as a match to mine (Axxxxxx), and I was wondering if you might have any info or ideas about the connection (like what side of your family etc.) Do you have a tree online? I am on ancestry and geni if you want to see mine.

I responded immediately as I often do and when he thanked me for my prompt reply, I wrote something like:


I try to answer inquiries like this quickly. If I don't, they end up in "the pile" and who knows when I'll get to it.

I am a terrible procrastinator. I like to go after the low-hanging fruit, to do the things that are easy. I call my research "electric" because it follows the path of least resistance. I put them on my calendar of things to do and move them along from month to month, sometimes without even looking at them. It was always thus, but it has gotten worse in the past four years as I have gotten more and more involved in DNA-based research.

For instance, in the run-up to the publication of my book "ENDOGAMY: One Family, One People," I found enough genetic evidence to allow me to declare exactly how certain of our families are connected to one another. As a result, I was able to merge some of those families together.

And there were more such discoveries - two years ago.

Updating the website
So what's the big deal and why am I writing about it now? Well, my website is very high maintenance. I do it all by hand and am not interested in trusting it to an online service that will do everything automatically.

When I find some "new" Pikholz descendant who lived a hundred years ago, I have to update my database, and the relevant web pages. These could include immigration, the Given Name Analysis, recording and displaying European records, the schematic tree of the


particular family, the Virtual Cemetery and yahrzeit table, the Holocaust pages, the password-protected tree in outline form that includes information on the living and more.

It's even more work when I make a change in the structures of the families. That involves adding parents' names, changing links and names, and more in all those departments which I mentioned above. A simple example is the Shimon list above where I can now add parents' names to the first and third entries.  And we now have a death index entry for Shimon, so we can replace the 1835 birth date with "1930."

It's a huge project and I have been moving it along my calendar for two years.

Doing it
One day last week, probably prompted by my discussion with Rita which I described here, I decided to work some of those mergers into the website. The family pages RITA, TONKA and HUSIATYN are gone as Nachman Pikholz of the LAOR family expands from 162 descendants to 377. 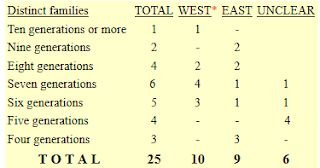 While I was at it, I merged my own family, Steve's Uncle Selig's and the Riss/Baar family (from my great great-grandmother's first husband) into ROSA, which now numbers 687 descendants instead of just 110.

And the descendants of Mordecai and Taube Pikholz (the family called ELIEZER) now number 621 instead of only 395. That reflects the addition of their sons Simon (previously DORA family), Szulim (ORENSTEIN) and Arie Leib (MATI).

I also got around to adding two new five-generation families STERN and WEINSTEIN, whose origins are unclear. (I have been in touch with them for nearly two years.)

The eastern families are now down to nine, where the image at the top of this page shows seventeen.

The ROSA and ELIEZER family schematic charts became unwieldy, so I kept four families on their own pages, similar to what I had already done with FISCHEL from Rozdol.

That leaves cleaning up the links. I have done some. I will probably do some more. The rest will go on the calendar.