My father's mother, Margaret/Miriam Rosenzweig, was born in Allegheny Pennsylvania - what is now Pittsburgh's North Side - in 1903. Her father, Moritz/Moshe Rosenzweig, arrived in the US first and her mother, Regina/Rivka, followed in 1902. With her came the five older children: Elvira (Aunt Ella) age 16, Siegfried (Uncle Fred) age 14, Sigmund age 11, Gyula (Uncle Julie) age 9 and Ilona (Aunt Helen) age 6. They were all born in Budapest.

In the 1910 census,  Moritz, Regina and their mothers and fathers are all listed as having been born in "(Hun) Magyar."

But they came from two different areas. Moritz' father's Rosenzweigs and his mother's Zelinkas were from Trencin County in what is now northwest Slovakia. Both families were in Trencin County since at least the 1700s, in several towns.

Nana's grandparents are buried in Vag Bestercze. I want to visit them. This is the hundredth year since my great-great-grandfather died at ninety-six, but we do not have a date.

Moritz' wife Regina Bauer was born in Kunszentmiklos, south of Budapest, in 1870. I actually remember her. She used to give me M&Ms. I discussed her family at some length, here and here. There is a large set of Bauers who lived in Kunszentmiklos and who previously lived in Apostag. Regina's mother Feige Stern is from Kalocsa, a bit further south.

Nana's maternal grandparents and at least one uncle are in Kunszentmiklos and visiting them is particularly important. I'll explain why after I've been there.

So a year or so ago, I decided I was going and I asked my first cousin Linda to come with. Our fifth cousin Cyndi - on the Zelinka side - decided to join us and all of a sudden it's time to go. We are meeting Thursday in Prague.

But before that, on the way, I am going to Germany, a country I never expected to set foot in. As I reported here three short months ago, we just found the entire family of my maternal grandmother's older sister. The one who stayed behind in Moscow. ("We found" means my friend and colleague Galit Aviv Sisto in New Jersey, whose first language is Russian.) One of my newfound second cousins lives in Nuremberg, three and a half hours by bus from Prague. So I am starting there, with my second cousin Inna, her daughter and son-in-law Anna and Viktor, and their daughter Julia who is the only English-speaker among them. Julia's brother Ilya may or may not be able to come down from Frankfort, where he is studying. I have a DNA kit with me and of course photographs.

The idea of going to Germany is horrifying. But I have to swallow this frog.

I hope to report on all of this as we go along. In the meantime, here is the plan. 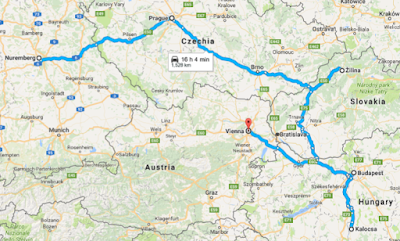 Wednesday - Nuremberg
Thursday - bus to Prague
We may meet a Zelinka relative who lives in Prague. I am reading the Torah on Shabbat.
Sunday - pick up the rental car and head for Zilina, Slovakia, our headquarters for four days.
Thursday - Budapest. Three family graves in the city with Karesz Vandor, but mostly being tourists. 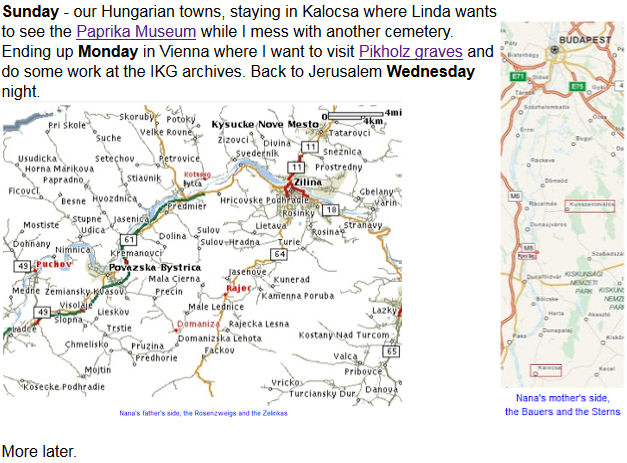