Sheva
The last few test results from Family Tree DNA came in ahead of schedule and at the beginning of this week I received the Family Finder results for a woman I will call B. Her grandmother is Sheva Pikholz Weinstein whose children were born in Nemerow Podolia in the 1890s, into the early 1900s, so I'm guessing Sheva was born about 1870.

I have no idea what Pikholz family she belongs to. She never left Europe, so we have no ready access to a grave which might have her father's name.

The other family we have in Nemerow is Nellie Rochester, who was also born about 1870 and who has six great-grandchildren in Kansas City. One of those - Joyce - tested back in the early days of our project, but had very weak matches with only a small number of Pikholz descendants.

When I found the reference to Sheva and her family last year, it was clear that she was probably Nellie Rochester's sister and that her granddaughter - B - was very likely a second cousin of Joyce's father and his brother.

But it took me until my recent trip, when I spoke in Durham, to get the test done.

Results
B's results showed just over eight thousand matches and I fully expected to find Joyce at the top of the list. Not only did that not happen, but B has 155 matches before the first Pikholz descendant shows up and even that isn't Joyce. 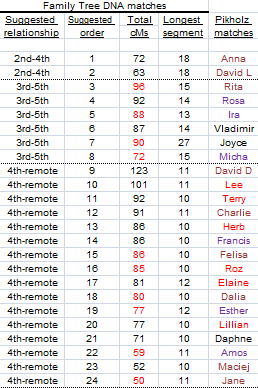 At the right are B's first twenty-four Pikholz matches. She has twenty-six more, all of whom are suggested fifth cousins-remote cousins.

Those in purple are Rozdolers, the reds are descendants of my great-great-grandmother Rivka Feige Pikholz, the browns are other Skalaters and those in black - including Joyce - are mysteries.

The numbers in red include matches on the X chromosome.

My regular readers will recognize the first two as my fourth cousins, the great-grandchildren of Uncle Selig whom I have discussed here many times.

The relationship order as determined by FTDNA remains very much of a mystery. B and Joyce have 90 cM of matches with a longest segment of nearly 27 cM - almost fifty percent longer than any other on this list. Yet Joyce is only B's seventh-ranking Pikholz match. And there are other rankings that do not appear to make a lot of sense.

Still, at third cousin-fifth cousin, Joyce is not far from what I would have expected and I am still trying to get a couple of her cousins to test on the theory that Joyce herself may be an outlier.

GEDmatch
We are used to the fact that there are differences between FTDNA results and GEDmatch results. They tell us that it has to do with differences in the analysis, the rounding, the parsing and other catch-all terms that obscure more than they enlighten.

We live with that. But sometimes the pot boils over. This is one of those times. In the chart above, I recorded the predicted relationships, total centiMorgans and longest segments for the first twenty-four matches both for FTDNA and for GEDmatch and added a "ranking" column for each. At the far right, I added a column showing the difference in ranking between GEDmatch and FTDNA for each person.

Anna and David, who are first and second according to FTDNA's reckoning, fall to thirty-fourth and thirty-fifth according to GEDmatch. Seven others have differences in rank of twenty or more. My father's cousin Herb who is thirteenth on the FTDNA list does not appear on GEDmatch at all, nor does Jane.

Someone phoned me this very day to tell me that she had compared several of her family members and her GEDmatch results are nowhere near her FTDNA results. "Which should I use?" she asked me. I know that the companies' algorithms are proprietary, but nonetheless perhaps someone can explain how these two sources - whom we depend on so much - can be so far apart. And indeed "Which should I use?" is relevant for all of us, isn't it?

The first of my two television interviews with "Tracing Your Family Roots" on Channel 10 if Fairfax Virginia is now available here. I dislike watching or listening to myself, so I have no idea if it's any good.

There are also Seattle recordings which I'll post later.
Posted by IsraelP at 5:50 PM