Chromosome Mapping - It's Not So Simple

At the end of last week, I put my toes into the water of chromosome mapping to show which bits of my own DNA came from which of my father's ancestral lines. I looked at family matches with Debbie and Cyndi on the Zelinka line, Fred on a combination of the Rosenzweig and Zelinka lines and Shabtai on Bauer and Stern lines. That was on my grandmother's side. On my grandfather's side, I looked at Bruce, Pinchas and Ben on the Kwoczka side and the Baar and Riss cousins as descendants of my great-great-grandmother from her first husband.

I tried to be conservative, leaving out a number of segments that were small or otherwise suspect and looking for additional matches within the family.

The result was forty-five segments, totaling something over 550 centiMorgans or about one-sixth of the DNA that I received from my father. Not a lot, but a start. 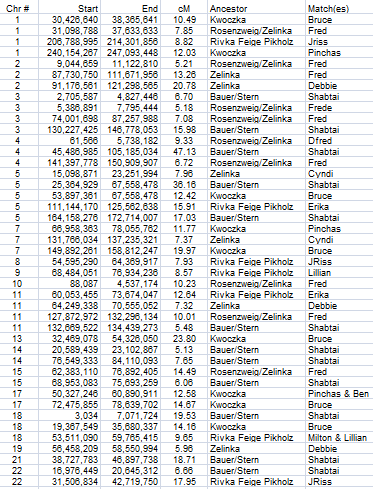 Debbie's segments
Well, it may be a start, but it's a rough one. First there is this:

Erika is one of the Riss cousins, a descendant of my great-great-grandmother Rivka Feige from her first husband. Debbie's segment is part of Erika's segment and yes they triangulate. They are on the same chromosome 11. None of this "maybe on my mother's chromosome 11."

Although I overlooked this when I did the mapping last week, I should not have been surprised. Debbie matches my family in multiple ways and I have begun using her matches in my Power Point presentations to illustrate endogamy.

Right there in point 3, I note that Debbie has matches with Rivka Feige's family, not only with the Zelinkas.

In fact, I discussed that specific segment on chromosome 11 when I introduced Debbie several months ago.

So I misattributed this segment to the Zelinkas when in fact it comes from Rivka Feige.

And what about the third of Debbie's three segments from last week's mapping, the one on chromosome 19? I mentioned that too in the original blog about Debbie's matches, but without showing the chromosome browser. So here it is.

This segment where Debbie and I match has also reached me from Rivka Feige. (Jane is my fourth cousin on that side.) So that's two segments that move from "Zelinka" to "Rivka Feige."

There could be a similar problem with Cyndi's two segments, but we thus far have not identified any effects of endogamy with Cyndi, so I'll leave that alone. For now.

But that's not all. In reviewing last week's mapping, I saw this - a three-chromosome round robin of conflicting matches with Shabtai, Bruce and Fred - each of them supposedly unrelated to the others.

(Shabtai and Bruce have the same Y-haplogroup, but too far from one another to be considered a Y match.)

None of the three pairs triangulates. Not even the pair on chromosome 5 where the end point appears the same for Shabtai and Bruce. So this is not showing us that Bruce and Shabtai have a common ancestor we don't know about. Nor do Bruce and Fred. Or Fred and Shabtai.

(To be precise, they do have matching segments - in fact Bruce and Fred have two - so there is common ancestry between each pair. But not on chromosomes 1, 5 and 15. And not in any of their matches with me.)

For each pair, there are two possible explanations. One might be a match on my mother's side - after all, I have two chromosomes each numbered 1, 5 and 15, one from each of my parents. The other explanation is that catch-all, circular answer that one (or both!) of those matches is IBS, Identical By State, a false match. Although I know better, I think of the IBS answer as a refuge of scoundrels.

On chromosome 1, Fred matches only my cousin Ruth, but not on the segment where he and Bruce match me. That does not prove that he cannot match me there on my mother's side, but it is something of an indication., especially since he doesn't match the other cousins on my mother's side ANYPLACE.

Bruce's matches on chromosome 1 include Ruth, Judy and Sam, but interestingly not my first cousins - whom he doesn't match at all.


There is no triangulation here between Ruth, Judy or Sam with me, nor do those segments triangulate with any of Bruce's other matches on my father's side, so Bruce does not appear to match me here on my mother's side.

So since neither Fred nor Bruce appears to match me on this segment on my mother's side, one of them must be IBS - a false match. I will nominate Fred for IBS since his 7.85 cM segment is smaller than Bruce's 10.49 cM segment. My match on this segment would therefore be on Bruce's Kwoczka side. But there is a large dose of guesswork here.

Chromosome 5 is a bit more complicated. Shabtai and I have a 35 cM segment and he has segments of just over 5 cM with Leonard and Sam.

Theirs do not triangulate with mine.

With Bruce, there is no triangulation and no matching at all with me. So here too, this is not from my mother's side.

But Bruce's match with me is 12.42 cM - a bit large for IBS. Yet, I haven't much choice. Shabtai's 35 cM segment is certainly not IBS. So I must ignore Bruce's segment and attribute this DNA to Shabtai's Bauer or Stern lines.

Endogamy is hard and the results of this kind of mapping are far from certain. Throwing it all into a machine and cranking out results makes a pretty, multi-colored chart, but I wouldn't try to take it to the bank. Even with tweezers and a microscope it's no simple or certain matter.
Posted by IsraelP at 1:30 PM