It's not generally my way to summarize at the end of the Gregorian year when we have a perfectly good Jewish New Year for that purpose, but between the end of the FTDNA sale and my upcoming trip to the US, it seems a convenient time.

Ester Pikholz and Marcus Stern
I first ran into the family of Ester Pikholz and Marcus Stern about a year ago and reported on that here. They have a daughter Sadie born in 1889 who was married to a Benjamin Francis, whose brother Sam Francis was married to my grandfather's first cousin Sarah/Sadie Frankel. Sam and Sadie lived in Denver. I had no idea who this Ester is, where she was from, who are her parents.

I saw them again in some Social Security Claims records a few months later, but that didn't add much.

Finally, Steve Pickholtz saw a reference to Esther and Max (as they are called in US records) in a tree on Geni.com. Steve actually found four people there of interest, but only this one replied to my inquiries. Turns out that Esther and Max Stern had a number of children who married in the US around the time of WWI. Earlier this week, I heard from a great-granddaughter and we have been carrying on a lively discussion all week. She says that Esther died in New York, which means there should be a grave and a death certificate with information on her parents.

I'll be meeting with this great-granddaughter in Philadelphia before my talk there next month. More on all of that as it happens. (I have not put this family on my website because I hope to learn where exactly they fit in. No sense in doing extra work.)

The DNA in my project
There are now ninety-two people who have tested (or at least ordered tests) as part of my  family projects. All but one has done a Family Finder and others have done MtDNA and various levels of Y-DNA from 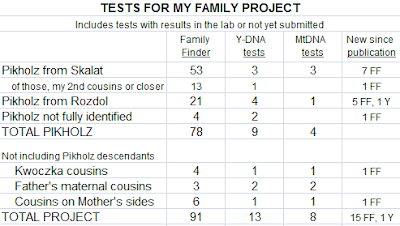 The chart on the right shows how that breaks down among my families and also notes how many ordered their tests after publication of ENDOGAMY: One Family, One People last summer.

There are eight Pikholz families of four or more generations who have not tested at all (not including the Sterns whom I mentioned above). Two of the missing eight are from Skalat, four are from Rozdol and two we can only guess at. There are also some smaller families and individuals but those do not seem to have living descendants.

There are quite a few in families who have already tested whom I am after to join the project. The excuses are many and varied.

Statistics from my personal matches
I have finally gotten past 5000 matches on Family Finder and as of today I have 5238, fifty-four of which are from the project. That would be 44 Pikholz, 2 Kwoczkas (we don't have results from the other two), two on my father's maternal side (the third has not sent in the kit yet) and all six on my mother's sides. So my remaining matches total 5184. Many of the testers in the project have more, some over 6000.

The statistics below are for my own matches.

I have six matches who are defined by FTDNA as suggested second-third cousins, what they call "close relatives." (That's aside from fourteen known relatives in that group.)

As is probably typical, though I haven't seen statistics, three of the six have not bothered to list their ancestral surnames and geographic areas. Of the three who have, only Jack S lists a familiar surname - Gordon, which is my mother's paternal side. I have been talking to Jack and although he insists we are closely related, I don't really see it in the numbers. Our longest match is under 30 cM, which is nice, but hardly blows me away.

David and Jack have the same surname, but except that name itself, the names they list do not match one another.

The interesting thing here - and I expect it is typical of Jewish matches - is that all six have about 3000 matches in common with me. That's 54-62% of all my matches which I share with these strangers. Those are very large numbers, it seems to me. (Others will say "I thought you matched EVERYONE!")

I did a chromosome browser to see how the six matched up with me in individual segments. This is not a scientific study - they may do better when compared to my sisters or cousins - but it is illustrative. 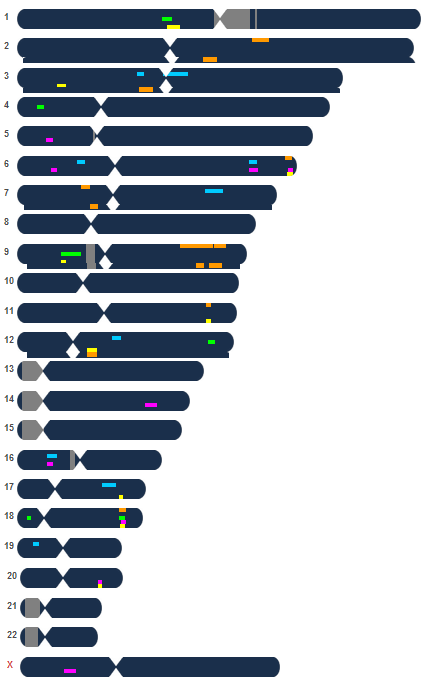 FTDNA's chromosome browser is limited to five matches, so I added David S at the bottom in orange, on the relevant chromosomes. The threshold here is matches of five or more centiMorgans. As you can see, there are some nice matches among the group - with me - on chromosomes 6, 9, 12, 15 and 18, plus some others.

Of course, this being endogamy, not all those are expected to be in the same directions. The group of three on chromosome six and the group of four on chromosome 18 may well come from different common ancestors, even though I match the same three people in both cases. It would help if we knew the ancestral names.

But these matches are small. How small? Here is the same chromosome browser with a threshold of 10 cM. 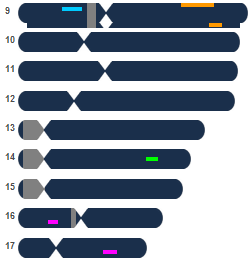 The only matches greater than 10 cM are on chromosomes 9, 14, 16 and 17 and aside from a very small overlap on 9, none of them match each other.

These are not close relatives of mine. And these six are seen by FTDNA as the closest  matches I have, aside from my known family!

Of the remaining ninety-three, fifty-one have been kind enough to list their ancestral surnames. I keep thinking I should write the others and ask them, but I really don't have the time and patience. The ancestors listed by the fifty-one include less than a handful with names that match mine.

One that I wrote to replied dismissively that his ancestor is from a different city in the same country, less that seventy miles away. He concluded with "So we are related somehow, but figuring out how is very difficult." I am not sure how he hopes to do that figuring if we don't follow up matching names from matching countries.

Of the ninety-three, for about half, the longest matching segment is in the 16-17 cM range and another quarter in the 18-20 cM range. There are five between 26 and 35 cM and two of those are a father-and-daughter.

As far as the common matches, I only checked a few, but even the furthest of the suggested second-fourth cousins have about 3000 matches in common with me. That's endogamy for you.

This whole set is more likely to be fourth-fifth, even sixth cousins, probably multiple ways,  rather than seconds or thirds. One of the seven known relatives is a third cousin, the others are further out.

I started this exercise thinking I would go as far as suggested third-fifth cousins, but now that I take inventory and see that there are 714 of those, I decided to leave it.

Housekeeping Notes
I am still working a couple of possibilities for west coast talks during the week following RootsTech. Not with Jewish genealogical societies. Stay tuned.

UPDATE:
For anyone who wants genetic genealogy tote bags or T shirts without shipping charge, we just added a "deliver at RootsTech" option to our order page.
Posted by IsraelP at 10:38 PM