In the course of the lecture that I have been giving about DNA analysis and endogamy, I make the point that it is important to test as many family members as possible and particularly first and second cousins.

I show a slide based on Wiki of the International Society of Genetic Genealogy which shows estimates of shared DNA for various relationships.

I emphasize that second cousins share on average only about 212.5 cM or 3% of their DNA, which means that they do NOT share nearly 97%. Second cousins are people that many of us know and have grown up with. Sometimes we even resemble one another. So by not testing second cousins, we lose alot of information.

Some months ago, Blaine Bettinger did a non-scientific (self-selected) survey of peoples' known relationships and showed that second cousins share about 246 cM on average. That's more like four percent, still not very much.

I was curious to see how endogamous families were different from non-endogamous families. (I am talking about general populations, not cases where close cousins married one another in the last few generations.)

So I did my own mini-non-scientific study. No cherry-picking. (Note, the comparisons below are for segments of five or more cM.) 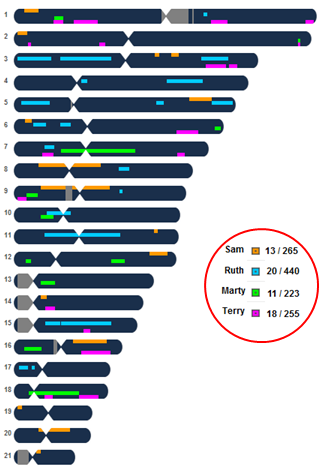 Here I compare four second cousins to my own results.

The two numbers for each person are number of matching segments and total matching cM.

Marty, Terry and I are mutual second cousins on the Pikholz side.

We see that Sam, Marty and Terry match me in the general range suggested by ISOGG and Blaine's study. Ruth, as I explained above, has a greater level of matching.

For purposes of comparison, I asked Roberta Estes if she would share some of her second cousin data and she readily agreed. 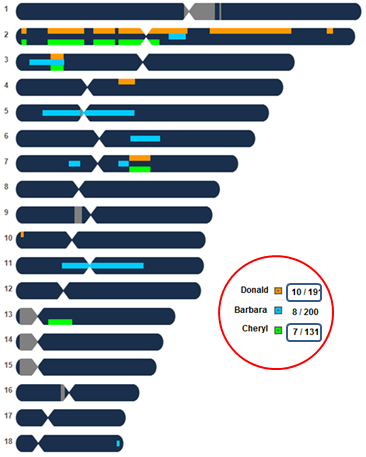 Roberta was comparing her mother Barbara and two of her mother's first cousins, Donald and Cheryl, to a second cousin named Rex. The closest of her three matches - Donald with 10 segments and 191 cM - is lower than the weakest of my matches - Marty, eleven segments and 223 cM.

So, at least in this bit of anecdotal evidence, my endogamous family has much better matches than Roberta's - which makes it much more difficult to make sense of it all. I added a slide into the newest version of my presentation, in order to make that point.

Roberta's data shows something else. Cheryl is Donald's sister and her matches - both number of segments and total cM - are a third less than her brother's. So we see another demonstration of the importance of testing siblings.

I have made this point before, most dramatically at the end of this. But for sport, I ran another Pikholz second cousin Rhoda (who is also a second cousin of Terry and Marty) against my sisters and me. 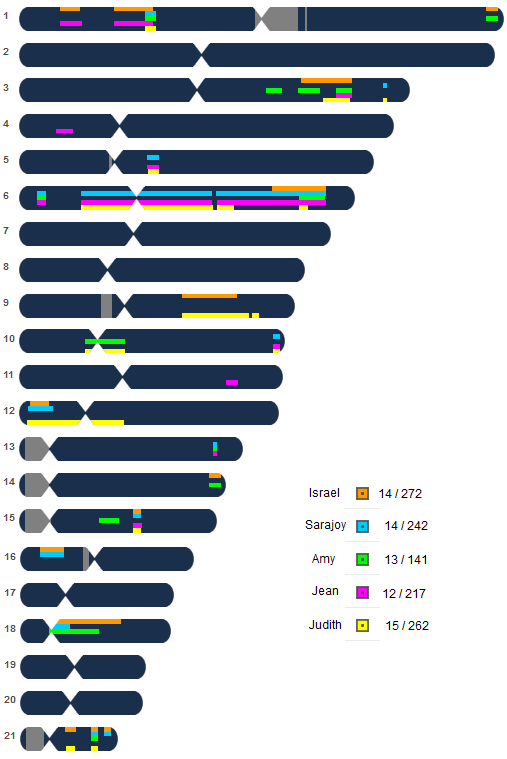 Here the number of segments that we match Rhoda is in a small range - 12-15. But Jean's total cM is 217, significantly less that Sarajoy, Judith and me. Amy has only 141 cM. Imagine if we didn't know that Rhoda is a second cousin and we had only Amy's results to compare to her. We would have seen 35-49% less matching DNA.

And while FTDNA and Ancestry are having sales is a good time.

Housekeeping notes
The Genealogical Research Institute of Pittsburgh (GRIP) has announced a course in Advanced Genetic Genealogy to be held 17-22 July in Pittsburgh. Registration is 2 March and I shall be on tenterhooks until then.

(Last time they let me give an evening presentation about Jewish genealogy. Perhaps they'll let me give one this time on Jewish DNA.)

If that works out and if my speaking proposals for the IAJGS Conference in Seattle are accepted, I'll have two weeks in between - 24 July-5 August - when I'll be in the US and available.

But before all that, I have registered for RootsTech in Salt Lake City (3-6 February) as an exhibitor, with books and genetic genealogy T-shirts and tote bags for sale. Needless to say that my booth will only be open only until mid-afternoon Friday. (The local Extended Stay is about twenty minutes walk from Chabad's synagogue.)

I am also putting together a lecture tour for about ten days before and after RootsTech. Three of the four Sundays are taken, but most of the weekdays are available. Anyone looking for a presentation on genetic genealogy - Jewish societies, non-Jewish societies and groups that are not genealogy-based - please contact me by email. Tell your friends. 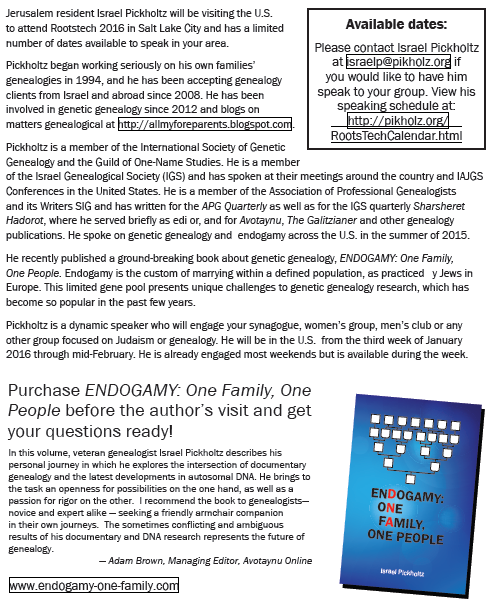 Finally, I have an article in the newest issue of the Association of Professional Genealogists Quarterly. I told much of that story here, a couple of years ago. 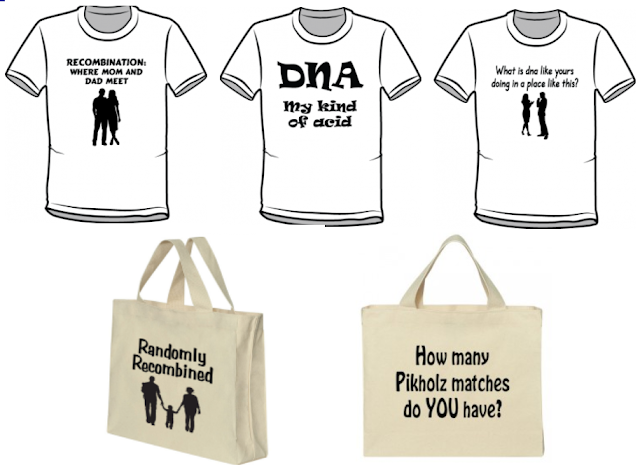