Another Corner of the Pikholz Families

Until now, we have had Family Finder (autosomal DNA) results from five Pikholz families identified as being from Skalat.

There are an additional eight Skalat families with living descendants, but with no one who has agreed to test. Two of those eight are almost certainly descendants of Nachman.

We also have eleven tests from the Rozdol famlies and two with uncertain origins, but I will not be discussing them today.

In the past three days, three people have signed up for Family Finder tests from two families which are known to be closely related and I would like to think that they will contribute significantly to our understanding of the family structure. I have been begging for tests from two additional family members in one of those lines, one of whom is the only candidate in either of those two families for a Y (male-line) test. 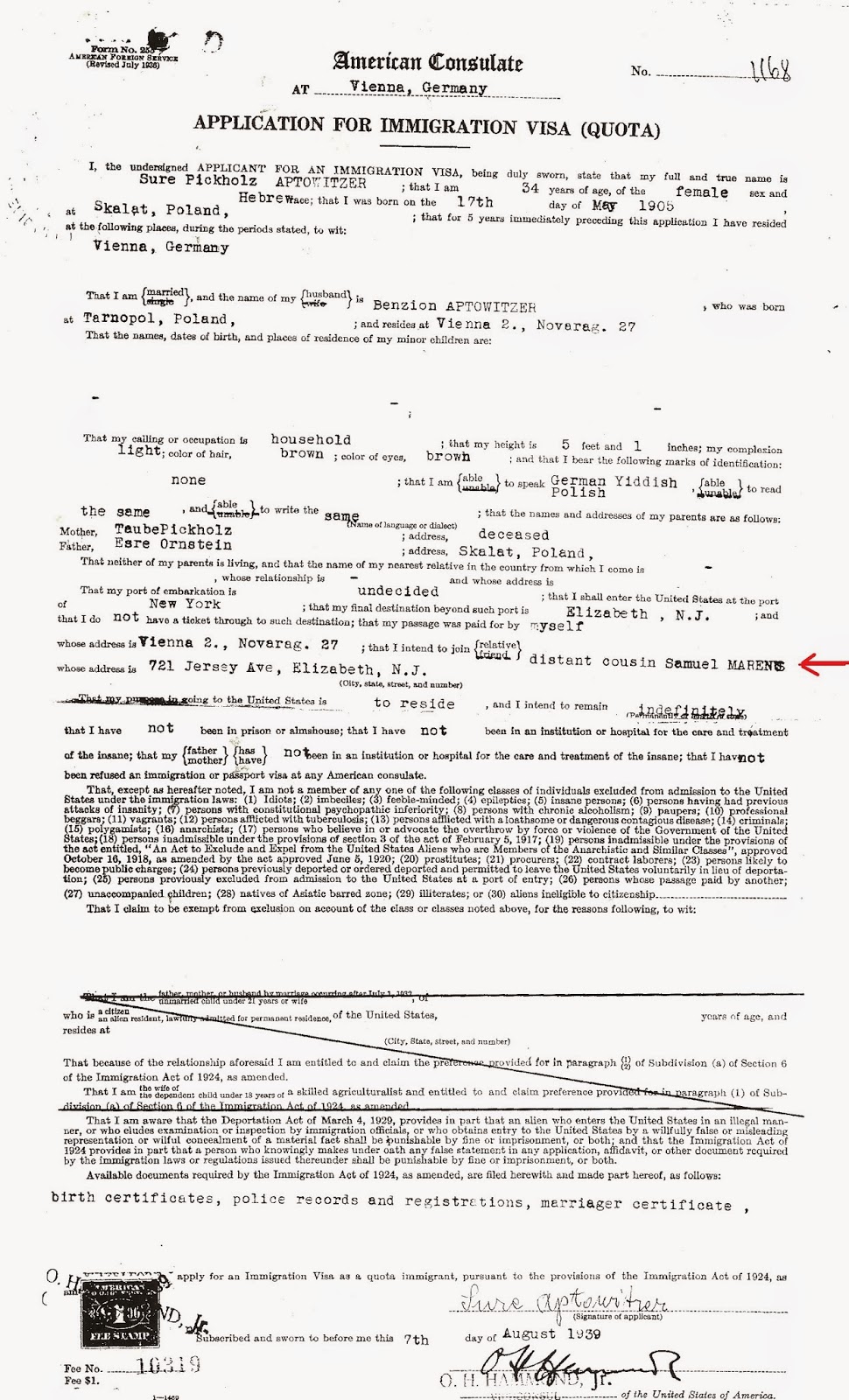 When Sure (=Sara) Pickholz Aptowitzer and her husband Benzion applied in Vienna for an immigration visa to the United States on 7 August 1939, she wrote "that I intend to join distant cousin Samuel Marenus" in Elizabeth New Jersey.

I have assumed that the cousinhood is not really "distant," just that Sara did not know how to define the relationship precisely. If Sam Marenus was not reasonably close, Sara could have named her own brother who had gone to the US a year earlier.

Sam Marenus was about the same age as Sara and both he and his older brother and sister were born in the US, so they clearly didn't know each other in person, before Sara went to the US. His mother Dwojre (Dora) was the daughter of Simon Pickholz of Skalat and was one of four of Simon's children who lived in the US. (The others died in childhood, save perhaps one for whom we have nothing but a birth record.)

So I have been keeping these two families - which I call DORA and ORENSTEIN - together. (Esra Orenstein was Sara's father. Her mother Taube was the Pikholz.)

Complicating any inquiry into the relationship between the two families is the fact that Sara's mother Taube had two Pikholz parents. Her father was Szulim (=Shalom, which was Sam's Jewish name) and her mother was Sara (sometimes written Sara Nesia) the daughter of Moshe Hersch and Jente Pikholz. Sara Aptowitzer was probably named for her maternal grandmother Sara (who died at age forty in 1887), but does not have the second name Nesia.

Sara and Benzion Aptowitzer had two sons, one died six years ago. The other son, Charles, ordered a Family Finder test earlier this week. I took advantage of his order to encourage Sam Marenus' daughter and two of her second cousins to test as well. She did and I think I can thank her brother-in-law Mark Strauss for encouraging that. Mark does genealogy research himself and may be related to us independently.

These two new tests may shed some light on the relationship between the two families. They also may show some connections with other Skalat Pikholz families. 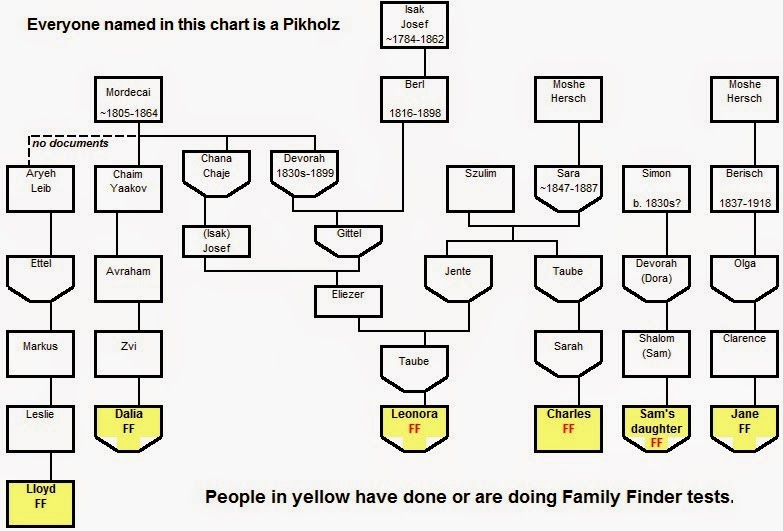 The two new families being tested are the second and third from the right. But if you notice, the one on the far right is headed by a Moshe Hersch who is probably the same general age as Charles' great-great-grandfather of the same name. If we are lucky, we may find evidence that these two Moshe Hersch are the same person. We'd still need some magic path to actual documentation, of course, but it would be significant progress. More testing in both those lines would help. But unfortunately we don't have many candidates.

(There is another Moshe Hersch about the same age, but he is a son of Nachman and there is nothing to indicate that he may be the same as one of these two.)

But we also have a bit of a wild card in Leonora, whose test is now on its way from here in Israel to Houston . Leonora's mother Taube (named after her aunt, Sara's mother) had four Pikholz grandparents and at least five Pikholz great-grandparents. Leonora's father is from Central Asia and should have no Jewish DNA whatsoever, which should make it a bit easier to look at her matches.

Leonora is therefore a second cousin of Charles on their mothers' side and to the extent we can sort out that side, can help both with the connection to Sam Marenus' line and with the Moshe Hersch question.

The parents of Taube's father Eliezer are first cousins on their mother's side. His father (Isak) Josef is the son of Chana Chaje and his mother Gittel is the daughter of Devorah, both of whom are daughters of Mordecai, the ancestor of Dalia and Lloyd. (Mordecai's line and mine are a perfect Y-37 match, indicating a close common, male-line ancestor for Mordecai and my Isak-Fischel.)

Eliezer's mother Gittel is also the daughter of two Pikholz parents. Her mother Devorah is, as I said, the daughter of Mordecai and her father Berl is the son of the "original" (Isak) Josef.

Note that Eliezer's father (Isak) Josef does NOT seem to be a descendant of the original (Isak) Josef, so I am guessing that there is a close relationship between Mordecai and Old (Isak) Josef. They are about twenty-one years apart (1784 vs 1805), which could be anything - father-son, brothers or further, but I tend to think that it is one of those two. I haven't a clue where we might find more evidence on this, but there are other descendants of Berl-Devorah and of Mordecai's daughter Chana Chaje who might yet be persuaded to give us some DNA.

Housekeeping notes
May you be written and sealed in the Book of Life and have an easy and meaningful fast.

And please accept my apologies if I have offended anyone in this blog over the past year.
Posted by IsraelP at 4:01 PM