This is what the results page looks like for my sister Sarajoy, showing her six closest matches. I have access to this page because I am a group administrator and she is a member of my group.


Among the tools offered on this page are filters by name and ancestral surname. If for instance, I want to see whom she matches who has listed the ancestral surname Gordon (our mother's name), I can enter "Gordon" in the window to the left of the red arrow (which I added for convenience) and press "Apply." then all we will see is matches that Sarajoy has with people who have Gordon among their ancestral surnames.

I can do the same thing for the "Name" window - I can see whom she matches among people actually named Gordon. And I can use both filters at the same time.

What I cannot do is see whom she matches among members of a project. I solved that problem originally by having all my Pikholz descendants list "Pikholz" (that specific spelling) among their ancestral names and using the "ancestral surnames" filter. But some two dozen non-Pikholz who match many of the Pikholz descendants would not make it through that filter, since they do not know of any actual Pikholz in their families.

So I have been lobbying for an additional filter based on membership in a project and have been complaining to whomever will listen that my pleas are getting no response.

Along comes Roberta Estes
Last week in her blog "DNAeXplained – Genetic Genealogy," Roberta Estes published what she calls "the second in a series about DNA projects, how they work and how they can benefit testers and others," which you can read here.

About halfway through this long post, Roberta dedicates five short paragraphs and one screenshot to an FTDNA tool called "Illumina OnmiExpress Matrix" which I had not seen before. This matrix is a tool available to project administrators and the link to it appears at the top of the second column of the group administrators home page.

It looked to me like this might be a way to work around the filter problem that has had me so troubled.

Now, I try to keep up with developments, whether by reading blogs, following groups on Facebook, listening to podcasts or following FTDNA on Twitter and either this is the best kept secret in autosomal analysis or I have been sleeping though the presentations.


Here is FTDNA's FAQ for the matrix. 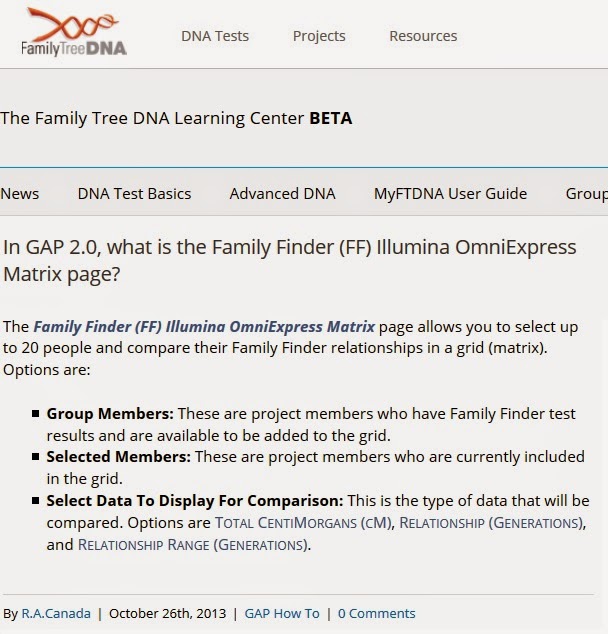 I had a look at the matrix and found that while Rebekah Canada is quite good at explaining the various parts of the FTDNA site, this October 2013 FAQ is just not right.

First of all, it does not allow you "up to" twenty people. I entered forty-five and it has yet to stop me.

Second, there is a fourth option for display of data.

But why talk about it when I can show you
I started with my Kwoczka project which has a manageable nine members, just to see how the matrix works. (We have results for a tenth but she hasn't joined the project yet.) All the relationships among the nine are known. 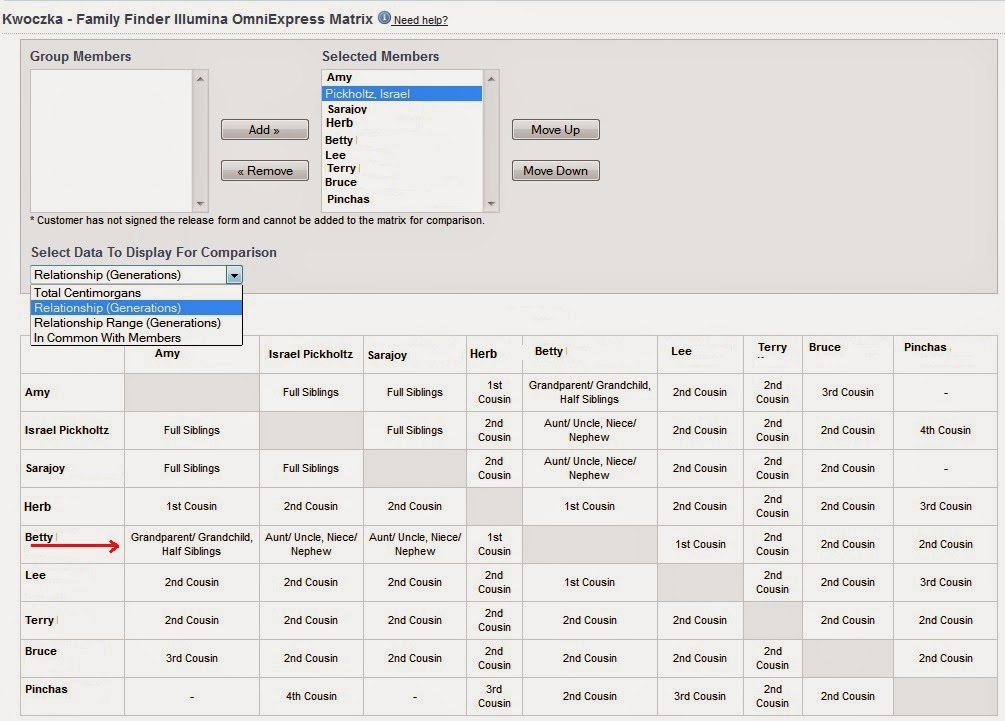 The four data-display options appear in the small window towards the center and I chose "Relationship." Note that these are not the known relationships I entered into the system, but the suggested relationships as calculated by FTDNA. But with anomalies.

One that I like is that it omits the remote cousins, as you can see with Pinchas and my two sisters.

Actually I have no trouble with their listing my sister Amy as a bit closer to our Aunt Betty and our father's cousin Herb. Such is the randomness of DNA. But I was very surprised to see the relationships listed next to my red arrow. FTDNA thinks Amy is Aunt Betty's grandparent, grandchild or half-sibling, while it thinks that Sarajoy and I are her "Aunt/Uncle, Niece/Nephew." But ever since we began looking at autosmal relationship charts, we have been told that all these show matches of about 25%. No one has ever made a distinction between the relationships suggested for Amy and those suggested for Sarajoy and me! Did I sleep through that too?

I switched the data display to "Relationship Range" and got what the FTDNA match page shows, including the remotes. And it continues to ignore the known relationships.

When I set the display to "Total Centimorgans," it gave those to the tenth decimal point, even though the last four-to-six digits were zero in every case. I cannot imagine whom is served by that supposed degree of accuracy, especially since in larger matricies, it makes it impossibly wide.

The fourth data display - the one that does not appear in the FAQ - is "In Common With Members." As best I can tell, it lists everyone who matches all nine of us (about 125 people), with the relationship to each. Again, the remotes are counted but left blank.


The Pickholtz Surname project has about sixty members, about half of whom are actual Pikholz descendants. In order to test the limits of the matrix, I selected forty-five members and displayed by relationship. Here is the result. I had to shrink the page substantially in order to present it here, but you really are not supposed to look at so many all at once. 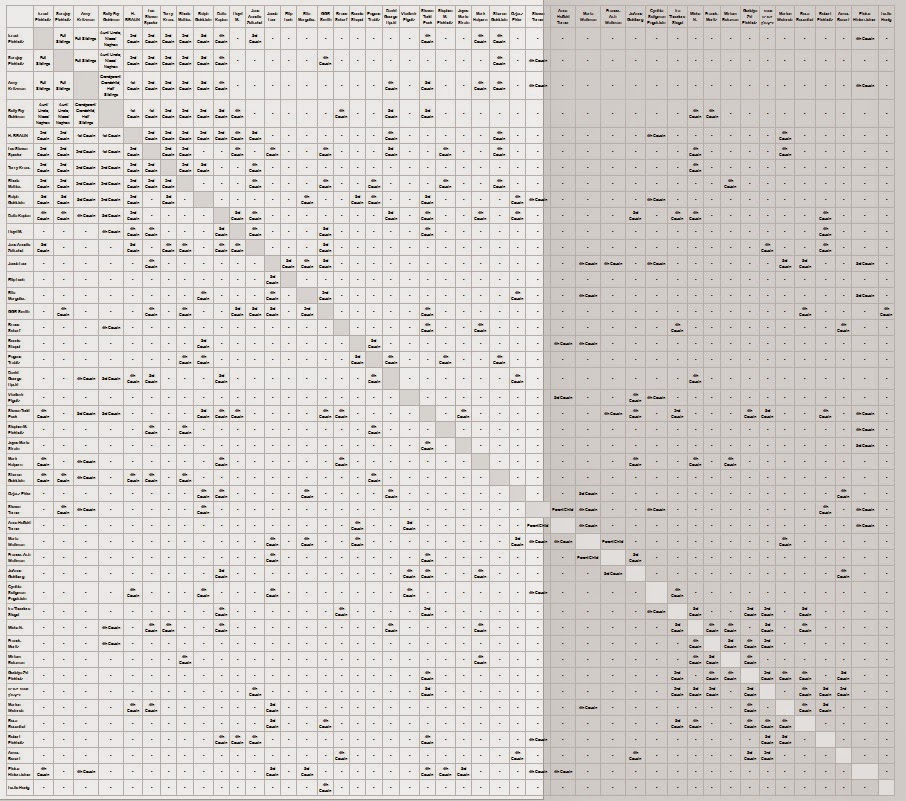 There is no significance to the two shades of grey. The left side is normal page width and the "extra" is on the right. The names along the top and the left side are not frozen in place, so once you begin scrolling, you lose them.

A bigger problem is that there does not seem to be any way to save a matrix other than as a screen shot. So if I want to make a modification tomorrow or next week, I have to rebuild the entire matrix from scratch, a very cumbersome process.

Roberta says she would really like "the ability to simply generate a file that downloads to a spreadsheet with a match matrix for everyone in the project."

As for me, I think there should be a way to associate some of these families together as a way to get a handle on the complexities of the matches.
Posted by IsraelP at 6:45 PM