The memorial for Skalat
I was not planning on writing about the annual Skalat memorial this year, except perhaps a brief passage at the end. I have written about this previously on this blog - here and here and here. The meeting is important, but not what you would call "interesting." Pretty much the same from year to year. 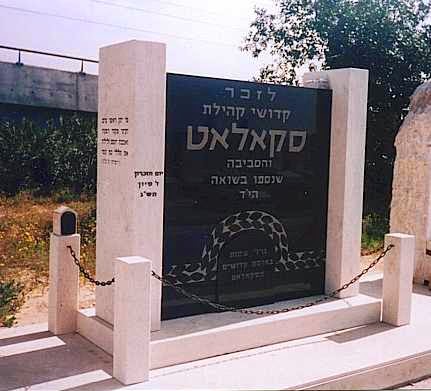 We met at five o'clock Thursday afternoon, the seventh of Sivan - which outside of Israel is the second day of the Shavuot holiday.

There is a whole row of town monuments along that stretch. Maybe thirty or so. At the other end is Husiatyn, a town near Skalat which I have written about here and specifically about the Zellermayer-Pikholz connections here.  Near that is a monument to Vileika, where many of my mother's Gordons lived in the early and mid 1800s, probably earlier too. There is Pleshchenitsy where my Gordon grandfather's mother, Anna Kugel, came from. And Zbarazh, not far from Skalat, where we had other Pikholz families.

We were about twenty-five or so. Zvika Sarid led us. We lost his mother's brother Mottel Weissman a few months ago, so again we all said kaddish together. We did that last year when Mottel was too ill to attend. Zvika pointed out that there were only four people in attendance who had actually lived in Skalat. The rest were children and grandchildren, plus a few spouses. I wondered about some of the missing. I knew that Tonia Winter was not well, but her daughter always came. And Giza - she is young for a Holocaust survivor. Giza came a few minutes later.

Zvika's daughter Chava took a picture of their mother Yocheved standing next to the monument and I made a comment about the monument's being the same as it was last year. But of course, that is not the point. The point is that while Skalat is frozen in time, Judenrein for seventy-one years, Yocheved is not. She left, made aliyah, married had children and grandchildren. That is what Chava was recording. Her mother growing older.

Some of the topics of discussion at the last few memorials were not mentioned. Nothing about the monuments in Skalat itself or the money to maintain them. No one spoke of plans to go back to visit. Skalat had been planning to make itself a five-hundredth birthday party last August. No one mentioned that either. 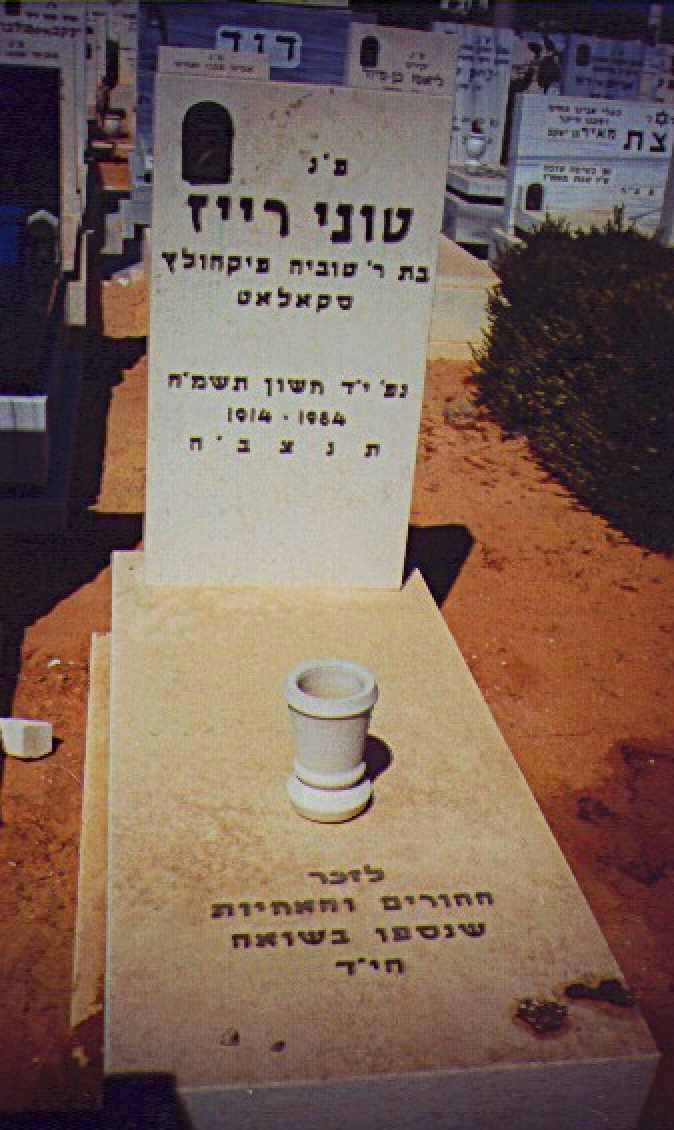 Mottel's daughter Chanaleh had written something years ago - perhaps a school project - about the yearly visit of the Rebbe of Husiatyn, who used to spend several weeks in Skalat on his way from his home in Vienna to his father's grave in Husiatyn. This was along the same lines as Tonka Pikholz had written in one of the Skalat memorial books. Tonka herself is buried in Holon and her sister's son and daughter visited her grave, as they always do. Tonka would be a hundred this year.

Zvika read from what Chanaleh had  written, which included something about the Rebbe's friend Yosef Milgrom, on whose property there was a small house in which the Rebbe stayed in Skalat. People came from all around to seek his advice and blessings, including the non-Jews.

Bronia said that no one was left from Yosef Milgrom's family.

So I spoke up. And told this story. Three years ago, I spoke at the IAJGS Conference on Jewish Genealogy in Washington DC, and in the course of my talk mentioned the Husiatyner Rebbe and his visits to Skalat. I spent the following Shabbes in Lakewood NJ, where my son and daughter-in-law and family were spending two weeks at the yeshiva. Someone asked me who I am etc and I said I am a genealogist, so he said that one of the rabbis who was there at the time had just written a book about his family.

I had a look at the book and saw a chapter about the Husiatyner Rebbe. So I went over to the writer, introduced myself and told him that I had just referred to the same subject in my conference talk. Across the table from him, and quite unrelated to him, sat an older woman who said "My husband's uncle Yosef Milgrom, built the hoiuse where the Rebbe used to stay when he was in Skalat."

"Small world" is a cliche, but cliches generally come from some truth. And Bronia was pleased that Yosef Milgrom has living family.

Zvika announced that he wanted to introduce something new for the memorial program. He read from the Hebrew version of the Weisbard memorial book, a personal testimony by Yoel Ben-Porath (Julek  Weinraub), as transmitted in 1995 to Lusia Milch. Zvika wants to "feature" a Skalater each year at the memorial meeting. He already told Zvi Segal that he wants him to prepare something about his father Shammai for next year.

No one wants to be the first to leave. We all hope that everyone will be there next year.

Other cemeteries
I usually use the day in the Tel Aviv area for other cemetery matters. 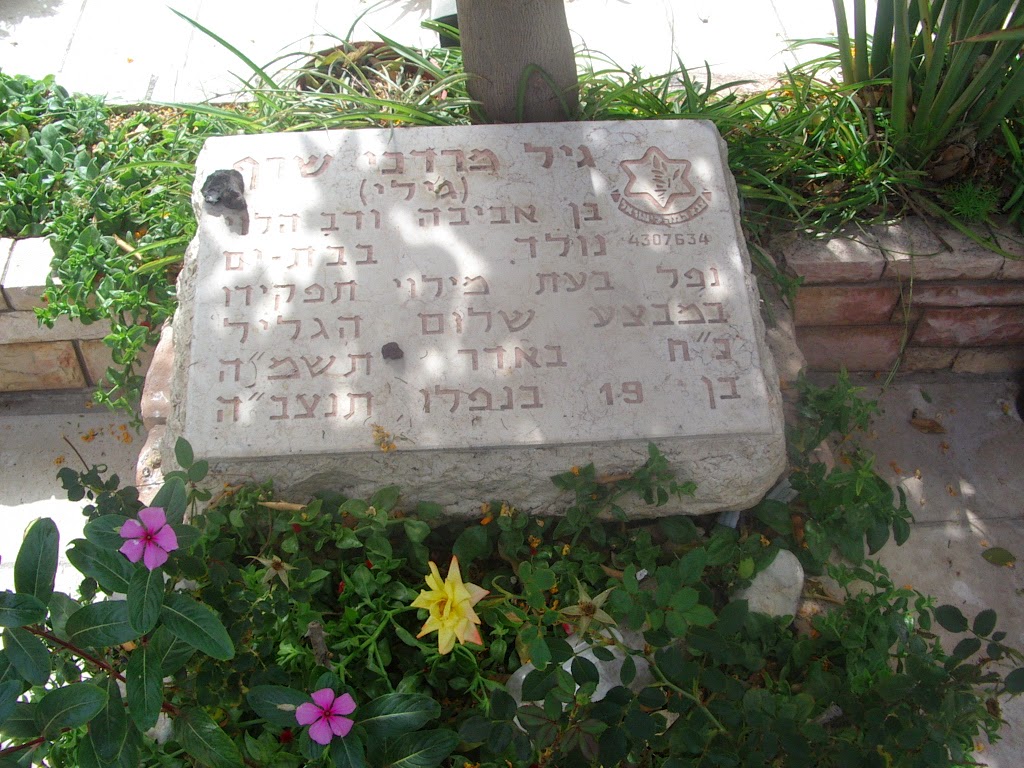 Gil Mordecai Scharf is a third cousin of my wife's, buried in the military section of the Holon cemetery.

He was a gunner in a tank and was killed during Operation Shelom HaGalil in 1985. He was nearly nineteen.

I went to the Kiryat Shaul cemetery to visit the two Zellermayer graves that I wrote about not long ago. Avraham's grave has his full birth name "Avraham Isak ben Zalman Yehudah." I wasn't sure it would, as his children's graves just have "Avraham." His yahrzeit was the day after my visit. 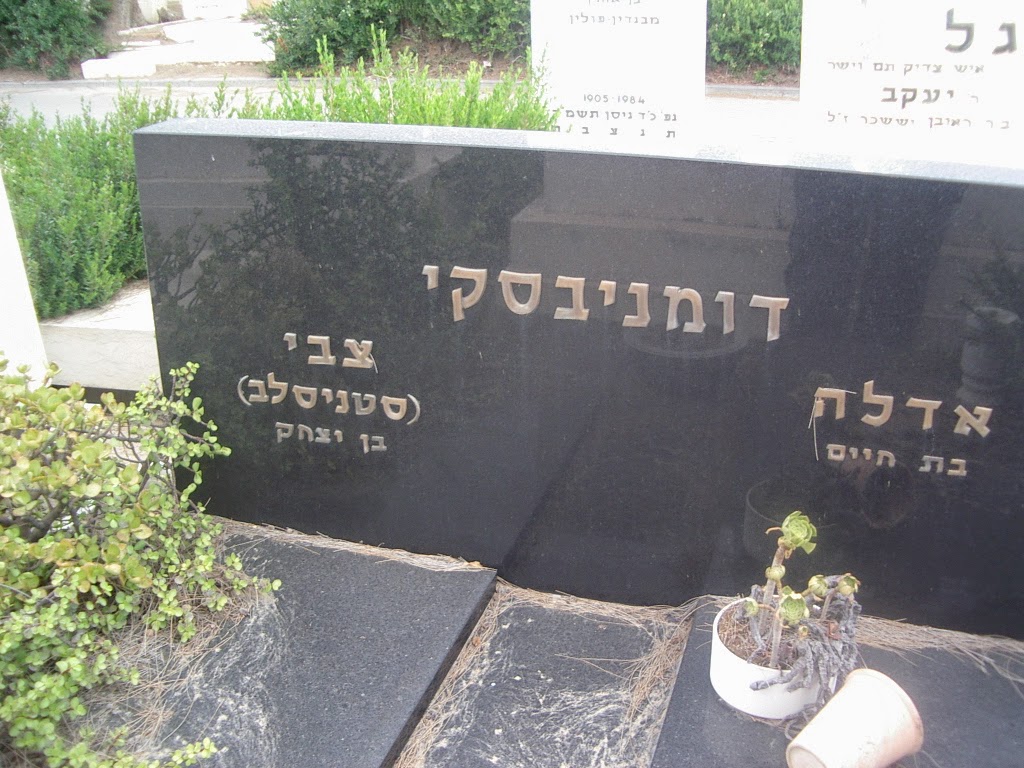 Also in Kiryat Shaul, I visited the grave of Zvi (Stanislav) Domnivsky. I mentioned him three weeks ago when I discussed the family of my Uncle Jachiel. Stanislav had submitted Pages of Testimony for two of Uncle Jachiel's Tunis grandsons and had defined himself as a relative. I was hoping the gravestone would give me a clue exactly how he was related. But it did not. 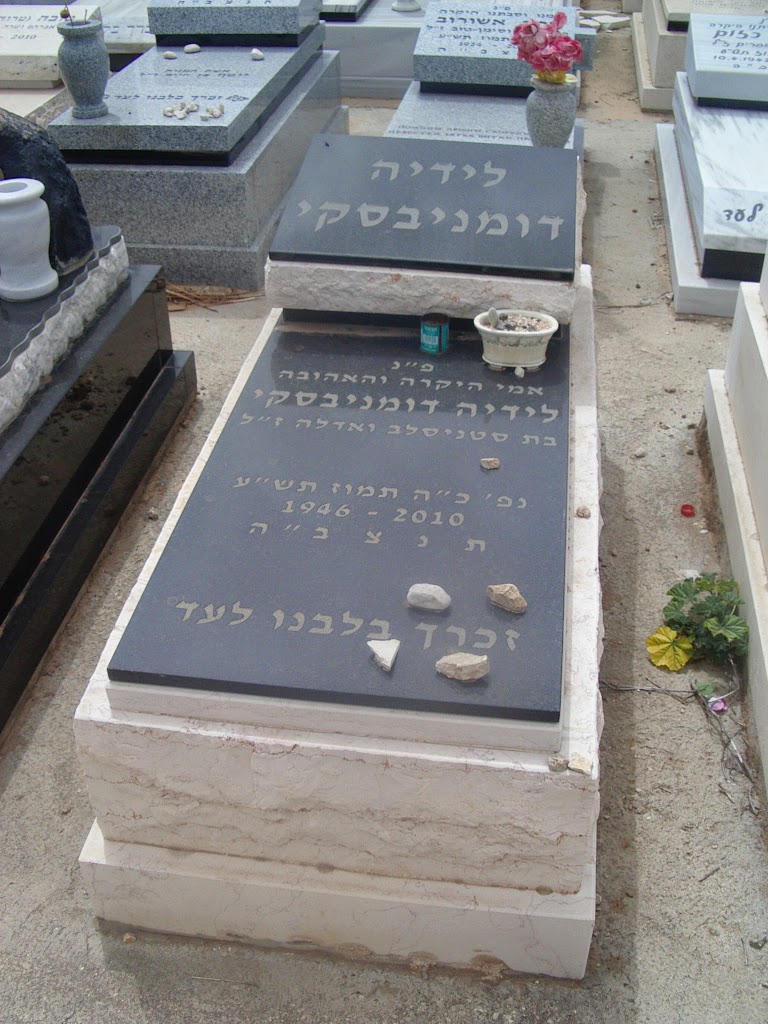 From there I went to the Yarkon cemetery to the grave of Stanislav's daughter Lydia.

That did give me some information. It says "My dear mother."

I will have to contact the burial society to see what they can tell me about the son or daughter - who probably has no idea who the Tunis family is.


Housekeeping notes
Occasionally I order records from Polish State Archives other than AGAD, when I need something for myself or for a client.  I made an exception recently when I placed an order with the Przemysl Archives - my sixth time ordering from them.

They are awkward to work with. They require statements explaining how the person placing the order is related to the person in the record, they send poor-quality paper copies by mail rather than scans, they cover up the other records on the page lest someone learn something that hasn't been paid for - and they take a very long time to process the orders even after they have been paid.

But in this case, a family member wanted  ten records on his other side, so I gathered up a few other people and placed an order on 11 September. The records came this week. Finally. One person received the single record he ordered. One got nothing. Another received part of an order. The original fellow who wanted ten got three of the ten, but also a handful of others that he hadn't ordered.

I think I am finished with Przemysl. (As my father would say "Famous last words?")