H is for HELLENBERG, HALPERN, HUSIATYN

Wednesday at Yad Vashem - The visit was not meant to be
A couple of weeks ago, I went to Yad Vashem to do some work in the International Tracing Service (Arolsen) database for a client.

When I got there I found that the database was down. Obviously it was not meant to be, at least not that day.

Hellenberg
In the days that followed, I learned a few things about one of my Pikholz puzzles.

In earlier visits to the ITS database, some years ago, I found these two cards.

Mendel and Frieda Pickholz, a married couple, he born 1883 in Podwoloczysk, died in 1941, she born 1893 in Czernovitz, released from the ghetto there in 1944. A handwritten note with a 1965 date seems to indicate she survived the war. Maybe she is a Hellenberg. It's not clear what the Halpern is doing here.

I ordered the files from Germany. Aside from the fact that Mendel died in the Czernovitz ghetto, my German-speaking friends could not add much.

Then came two breakthroughs, two weeks ago. First I received the 1923 Czernovitz marriage record for Mendel and Frieda, thanks to Daniel Horowitz of My Heritage. The next day, I heard from Batya Unterschatz that she had located Freida living in Tel Aviv until her death in 1971. In the same apartment was Bella Hellenberg, about the same age, perhaps a sister-in-law. Batya was not able to identify family members of either woman.

Defining Mendel
Here is the marriage record - the second one on the page.

Well, I certainly recognize the family of Joel Halpern and his wife Chana (sometimes Chancie) of Husiatyn. Here they are, with Mendel and his wife Freida at the bottom left. 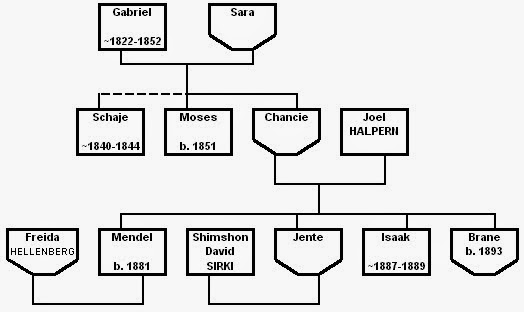 I believe that Gabriel is the son of Nachman Pikholz (b.1795) though I have no actual evidence.

I also believe that the son Moses, born 1851, is the same man who heads the family we call TONKA. Here we have a bit of indirect evidence. Tonka is Moses' granddaughter and lived in Skalat. She wrote a piece in the Skalat memorial book about the Rebbe of Husiatyn, who used to spend several weeks a year in Skalat. Tonka's father Tuvia was a Husiatyner hassid and that fact may be connected to the fact that Gabriel - a Skalater - lived in Husiatyn.

If the two Moses are the same, we have living descendants of Gabriel and Sara. Of Chancie's children, we have not found any descendants beyond the above chart, but perhaps the newly-found marriage of Mendel and Freida gives us something to work with.

I found what the note on the marriage record says. Mendel and Freida were divorced in Czernovitz in 1936. That  explains why Freida was using her maiden name Hellenberg in Tel-Aviv.

I did some searching in the yizkor books listed on JewishGen and found a listing in Husiatyn for "Yoel, wife, daughter Chanchia, Sons Moshe, Berl and Fishel." Close, but not quite what I wanted. But since I'd be going back to Yad Vashem in a few days to do that client work that I hadn't done a few days earlier, I figured I should have a look at the actual Hebrew version of the Husiatyn book as well as seeing if the ITS database had anything on the putative sister-in-law Bella Hellenberg.

I also decided to go to Kiryat Shaul Cemetery in Tel-Aviv, to visit the graves of the two Hellenberg women. I wanted to see if the stones said "our mother" or "our sister" or what and if there was any additional memorial to family killed in the Shoah, as is often done here.

The following Wednesday - Yad Vashem and Kiryat Shaul
Wednesday morning, I went to Yad Vashem, set myself up for a look at the ITS database and asked my friend Zvi, who was on duty in the library, for the yizkor book for Husiatyn.

First I did the work for the client.

I found ITS references to a Bella Hellenberg, but not the right woman.  I found the Joel Halpern family in the Husiatyn book but there was nothing beyond what I had already seen in the JewishGen translation.

I did find ITS references to the wrong Joel Halpern and figured I may as well order those files. The file numbers didn't make sense and I went to discuss it with Zvi, returning the Husiatyn book at the same time.

As I waited for Zvi to get off the phone, I saw a man in hassidic-dress looking at the Husiatyn book that I had just placed on the counter. I asked him not to take it until Zvi has written that I had returned it. Turns out he works at Yad Vashem and has some Husiatyn interests as well. But the person who REALLY knows Husiatyn, he told me, was out in the lobby.

David Margaliot came in a few minutes later and we introduced ourselves. Also a man in hassidic dress, he runs an organization called Maagarim in Ashdod. Something about international archival services and a Husiatyner hassid. We exchanged cards and will speak later, but now I see why the visit the week before had not worked out. It was this week that I was meant to come to the Yad Vashem research library.

I proceeded to Tel Aviv. and found the two graves in Kiryat Shaul. 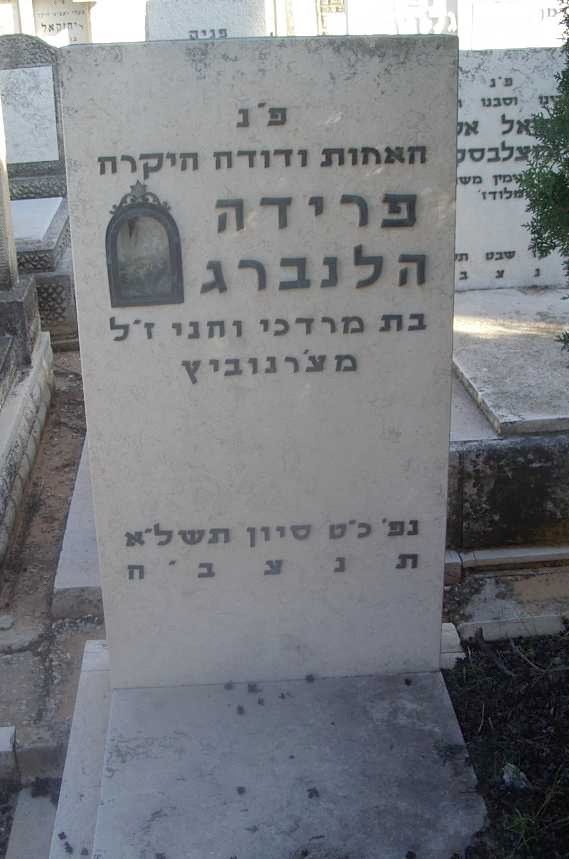 Freida Hellenberg, sister and aunt. No possessive pronoun - "my" or "our. "

Bat Mordecai and Chani from Chernovitz.

And her date of death.

So there are no children, but at least one brother or sister, living at the time of her death in 1971, probably here in Israel.

I submitted a request (it carries a fee of NIS 50) to the burial society for information on next of kin or other family information and I hope to hear from them soon.

There are niece(s) and/or nephew(s) - whom I can probably find - but whether they know anything about the family of the aunt's ex-husband is another matter. 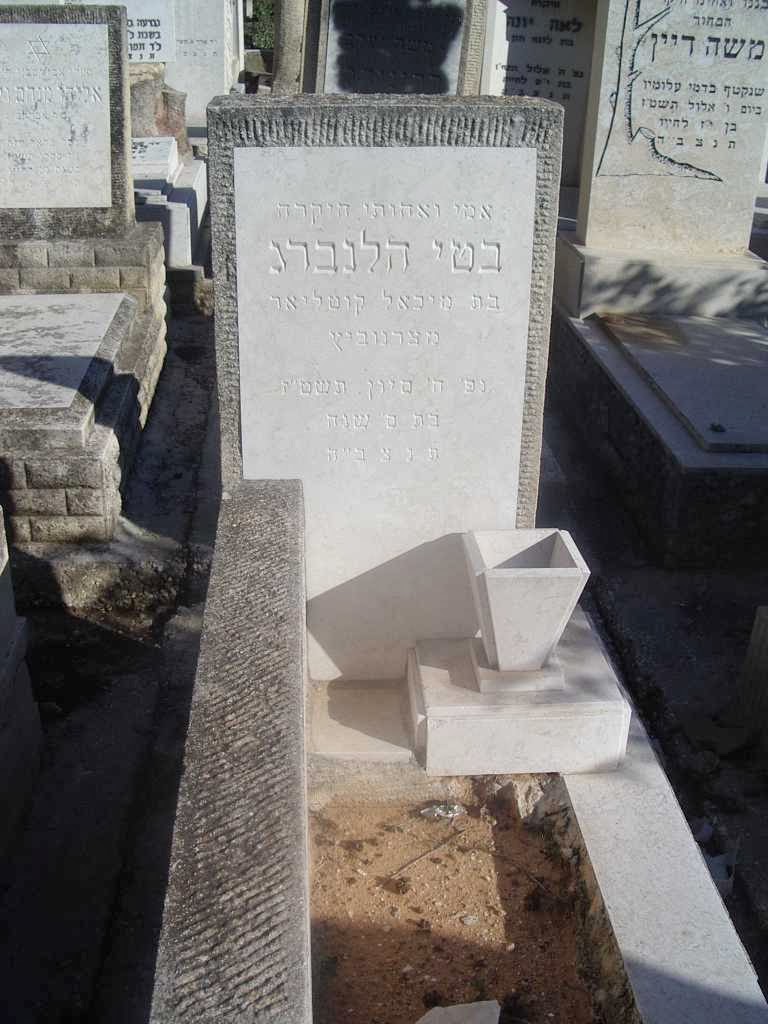 Bella Hellenberg is called Betti. "My dear mother, my dear sister." Nothing else I didn't know.  She died in 1957 at age sixty.

Neither of the women's stones mentioned family lost in the Shoah.

The possibility that Betti/Bella's son or (more likely) daughter knows anything is pretty remote, but if nothing turns up with Freida's people, I'll check Betti's.

I am not optimistic, but progress often comes as a surprise.

Housekeeping notes
1. I am to be interviewed this week by Marian Pierre-Louis who does a weekly podcast with genealogy professionals. It should play next week

2. We have a set of matches between Pikholz and Kwoczka family members and my eighth grade math teacher and her daughters.
Posted by IsraelP at 7:30 AM