It was not my intention to write a full blog every time a relative dies, but we lost two this week, two who are intertwined in my childhood and my young adulthood. One on my father's side and one on my mother's side, they both lived in Silver Spring Maryland.

Our family is diminished by their deaths.

Marjorie Pickholtz Spector
My father's first cousin. Double cousin, actually. Their fathers are brothers and their mothers are sisters. Margie was an only child, born in the twentieth year of Aunt Helen and Uncle Joe's marriage. She was born eighty-one years ago (a week short in the Gregorian calendar, but a couple of weeks after in the Jewish calendar) in Pittsburgh and was named Masha Zviyya for her two grandfathers, Moritz Rosenzweig and Hersch Pickholtz. She married Harry Spector in June 1954 (I remember the occasion, even though I was not in attendance) and raised a daughter and two sons in Silver Spring Maryland. Cousin Margie and Cousin Harry moved to Portland a few years ago, which is where the two sons live. Cousin Harry died three years ago. I last saw them almost exactly twenty years ago at my grandmother's ninetieth birthday party.

Ethel Beatrice Rosenbloom Klavan
The last of my mother's first cousins and the one she was closest with, the last of the three children of my grandmother's brother Hymen Rosenbloom and his wife, Becky. She was born eighty-six years ago, a week and change before Pesach, seven months after my mother. She carried the name of my great-grandmother Etta Bryna, as did several other family members, including my mother's sister. The three Rosenblooms grew up in Washington DC, where Uncle Hymen had a grocery store and eventually each of them moved to Silver Spring. My mother spent a few teen-age summers with them. Cousin Ethel married Stanley Klavan in June 1954 and they raised one son. I last saw them two years ago at the unveiling for her brother Maurice, who had died the previous Hanukkah..

One of the things I thought to say at my mother's funeral, but didn't, was this.
Let me warn you that when you get where you are going, you will find two family members and a friend you won't expect, because we didn't tell you everything these past few months. The family members are Cousins Harry Spector and Maurice Rosenbloom.

So now we have Cousin Margie and Cousin Ethel the same week.

As a child
Note: I am writing from my childhood recollections. The facts may be imprecise. I wasn't taking notes.
My first childhood memories of visiting my mother's Washington relatives were of multiple night-time drives down Georgia Avenue into the District, noting the alphabetized cross streets. At some point we would cut across to MacArthur Boulevard, where my mother's eldest cousin Anna and her husband had a grocery store. They lived in the same building as the store. Cousin Anna was twenty-two years older than Mother.

That was headquarters  for any visits we paid to the rest of mother's family - Aunt Rose at 13th and Missouri, Uncle Hymen and Aunt Mollie in their grocery store (they lived upstairs) near Griffith Stadium and others.

Then things changed. Cousin Margie and Cousin Harry moved into the area. My father's cousin.(1)  So that's where we started our visits, at 1612 Cody Drive in Silver Spring.

My first real memory was when they were visiting in Pittsburgh one summer and my parents announced that they were taking my younger brother and me back with them to Silver Spring for a visit. It was about a week and a half and we had no notice. We drove with them and baby Sharon and they would be sending us home on a train by ourselves. I was eleven.

Somewhere on that trip, it must have been at a rest stop on the way from Pittsburgh, I had my first taste of beer. (Didn't like it then and didn't like it the second time either.) My parents trusted them.

Cousin Margie was different from all my other relatives in one particular thing. She always spoke to me like an adult. Maybe It's a silly example, but it's one I try to follow - where as all other adults would say "your grandmother," she would say "Aunt Margaret," speaking from her own perspective and trusting me to get it right. As they say in Hebrew, she spoke to me at eye level.

So for about ten days we lived in their house and shared experiences with them, went to shul with them Shabbes, etc etc. Cousin Margie put on a large yarmulke when she lit candles, which we thought was pretty funny. I got a bee sting near my eye, in their back yard, which required some kind of medical attention - not funny at all.

And they made sure we saw my mother's relatives. We spent at least one day with Cousin Ethel Klavan and her son Ross at a fancy swimming pool. Ross was about four and wanted us to be very impressed that they had recently bought a Renault Dauphine. 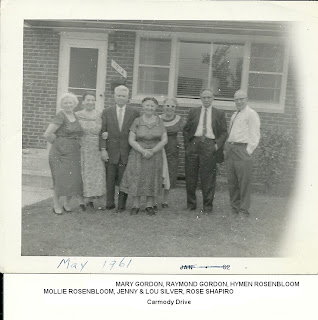 And Cousin Margie took us to visit Uncle Hymen and Aunt Mollie who had recently retired and moved to Carmody Drive. It took ages to find the street, but it was a house I learned to enjoy visiting over the years. Uncle Hymen was in a battle with Social Security, who claimed he was only sixty-four.

The last night of our visit we went to an ice cream place called Gifford's. Cousin Margie and Cousin Harry had a ritual of going there once a month, diets or no.

Then we went home. On the train. By ourselves. It was an important week - more in the fact than the details.

As an adult
Before my aliya, I made a few trips to Silver Spring, one in 1967 for some reason I cannot recall. I stayed with the Spectors, who had moved to Coleridge Drive.

And I was there for the weekend after my grandfather died - the funeral was on a short winter Friday. My parents were already in Israel, so I was their representative. We stayed with the Spectors. (3) But I also went with Cousin Ethel to visit Uncle Hymen, who brought out some old pictures that I had never seen.

During the period before my aliyah, I carried on extensive correspondence with Cousin Ethel about our family history. My grandmother had died without telling anyone much of anything, so Uncle Hymen is all we had. He didn't know much. His mother died when he was two years old and he left Russia when he was twenty. But he told us what he could - like the fact that they had lived in Borisov - and it was Cousin Ethel who kept after him.

In the ensuing years, there were a few visits. In 1982 and again in 1986 and 1989, and these two cousins became my "go to" people on these visits. Some of the time we stayed with the Spectors and some of the time with the Klavans, who would have other cousins over to see us - from both sides of my mother's family.. (Uncle Hymen was by this time in a nursing home and Cousin Ethel took me to see him there.) The Klavans were the first people I ever knew to have a five digit street address.

The Spectors visited here a few times.And Cousin Ethel and I had a few very long phone conversations, at her initiative.

We are diminished by the loss of each person from the older generation. Doubly so this week. May their souls be bound in life.

I am saying kaddish for Cousin Ethel. She is buried at Oxon Hill, near her parents, brother, Maurice, my grandparents and my grandfather's brother and sister and their spouses.

Condolences to both famiies and best wishes for good health to Cousin Stanley.

Notes
(1) Confession: I was certain about Cody Drive and knew it was the third right off August. I was less sure about the number. I knew that the first and third digits were 1, that the second and fourth were even and that the second was larger than the fourth, but I had to look it up to get it exactly right - 1612.

(2) The Klavans were in Jerusalem for Ross' bar mitzvah. The picture was taken in the King David Hotel.

(3) That Saturday night, I went to my grandfather's second cousin Sig Fritz - whom I had met at the funeral and whose mother is buried next to my grandmother. Sig was the one "who knew everything" about the Gordon family (my mother's father's side) and we spent the evening on the floor with a long roll of paper which eventually was the basis of my subsequent work. Today, his daughter lives ten-fifteen minutes walk from us.