(Based on an article that appeared in The Galitzianer, May 2008)

I arrived at Newark Liberty International Airport for the New York Conference, late Wednesday afternoon, intending to spend a few days with my son, Eliezer, who is studying in the US and to visit several cemeteries in the area, to add to my collection of family graves.  Our first stop was to be at Mt Lebanon Cemetery in Iselin, where we would be meeting Robert, a third cousin of my wife, who was going to take us to the Alexander family graves there and at Beth Israel in nearby Woodbridge.  But Eliezer and I wasted an hour trying to find each other at the airport and another hour so so getting lost in New Jersey, eventually meeting Robert at Mt Lebanon, at close to eight thirty in the evening.

We had a night tour of the cemetery and then – still in the cemetery - spent some time looking at family photos by the light of Robert’s trunk light.  We decided to skip Beth Israel.  Eventually – after getting lost again – we reached the home of my newfound cousin Bruce, where we would be staying until Sunday morning.  Bruce is a second cousin of my father’s, a grandson of my great-grandmother’s brother Rachmiel Kwoczka, of Zalosce, in East Galicia, the same town where my Pickholtz grandfather was born.

Our plan for Thursday was to visit a small cemetery on the Newark-Elizabeth border, two cemeteries on Staten Island, then Beth David out towards Long Island, before coming back towards town to go to Mt Lebanon, Mt Hebron and Mt Zion in Queens.  Then we would end the day with an evening visit to Steve Pickholtz in Tabernacle NJ, towards Philadelphia.  The first stops took longer than we expected, so we decided to put off Beth David until Friday, when we planned to drive out to the far end of Long Island to visit a live Pickholz.

The Mt Hebron stop was all Kwoczka – eight graves in all.  We had addresses for six.  For Lillian we had only a 1925 date and for her husband Berisch (Bruce’;s father’s brother) we had only the SSDI record that he died about February 1965.  Bruce wasn’t old enough to have a clear recollection, himself.

So we stopped at the office, where they told us that they had no grave for either Berisch or Lillian, but when we gave them Lillian’s date, they found her with her name badly misspelled.  I was surprised to find that of all the Zalosce Kwoczkas, only Lillian, who was not from Zalosce herself, was buried in the Zalosce section.  I figured Berisch should be there as well, and after combing the area and coming up empty, I called out “Berisch ben Yerachmiel!”  (Eliezer was horrified.)  Berisch didn’t answer.  I tried this a few more times, but still nothing from Berisch.

We moved on to the other Kwoczka graves in several other sections, and here too I looked for Berisch and continued calling “Berisch ben Yerachmiel!” to no avail.  Berisch didn’t answer, didn’t signal us, didn’t give us a clue.  “He isn’t here,” I told Eliezer.  “If he were, he would have helped us find him.”

It must have been after eleven by the time we arrived back at Bruce’s house, where I duly reported that Berisch isn’t at Mt Hebron.  He asked how I could be so sure and I told him the story.  Bruce - who wears a black kippa – nodded his assent, but was clearly unconvinced.

The next morning, we set off early for Long Island, figuring we could spend an hour or so, visiting a list of graves at Beth David.  We have nearly fifty graves at Beth David, all Galizianers and mostly Pikholz descendants, but most of them had already been photographed, so we took the time to check out the dozen we needed, plus those I needed to fulfill some barter obligations.  On our way out, we stopped at the office to wash our hands, as is customary.

But for some reason, Eliezer drove a bit past the office, so we got out and used the bottle of water in his trunk.  As I washed, I saw a large wall opposite, with the name BRUMER and a number of small stones with individual names.  And there was Kopel Brumer – Yaakov Kopel ben Yehiel Michel Halevi – and his wife Dora Brumer – Devorah Gittel bat Chaim Halevi.  Nearby were Isidor Brumer “Beloved Brother” and Florence Atlas “Beloved Aunt,” both the children of Yaakov Kopel Halevi.  “Eliezer,” I said, “this is our family.” 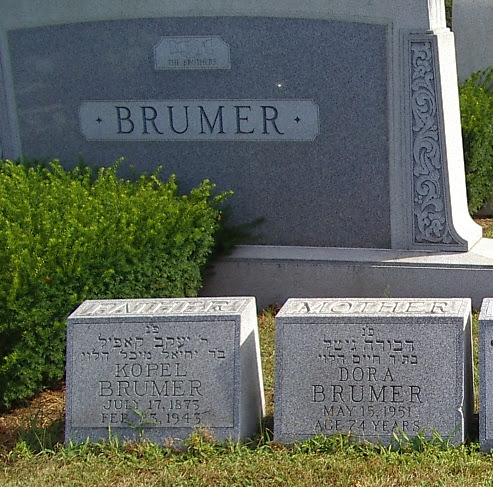 We have a Devorah bat Chaim Halevi Pikholz from Skalat, who married Kopel Brumer.  They had an unmarried son and a married daughter with no children.  They went to America a hundred years ago and no one knew anything further about them.  This is a perfect fit.

And we realized that we shouldn’t have found them.  Not only had we stopped to wash at the wrong place, but had we come the day before as planned, we wouldn’t have stopped to wash at all, for when I do several cemeteries in succession, I wash only after the last one, and Beth David was on the schedule before the three in Queens.

“These people wanted us to find them,” I explained.  “Now do you understand that Berisch is definitely not in Mt Hebron?”

Bruce understood.  Eliezer took my word for it.

You might want to have a look at this. Debbie is a friend of mine, who has DNA matches with a significant number of Pikholz testers.
Posted by IsraelP at 7:30 AM