I think I have mentioned Uncle Selig briefly once before, but since I have no idea how to search my entire blog history in one go, I cannot be sure. If anyone knows how to do this, I'd be pleased to know for future reference.

Many years ago when I was collecting family genealogy rather than doing actual research, my knowledge 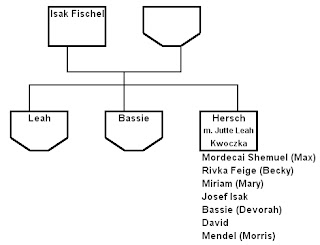 of my Pickholtz was limited to this.

Morris, the youngest of the children of Hersch and Jutte Lea, is my grandfather.

Hersch was probably born in the early 1850s and the sisters were a bit older.


My father's grandfather died when my father was eight years old, so my father knew him a bit, but he had no recollection of how he happened to pick up this bit of information about Uncle Selig. Surely Hersch had other aunts and uncles. What was significant about this one that he should have been mentioned?


In any case, I made the notation and the picture in my head became this, including the addition of the name of Hersch's mother and the fact that the surname had been spelled Pikholz.. 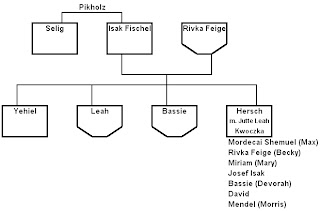 We started the Pikholz Project nearly fifteen years ago and at some point we (Jacob Laor and I) decided to order records from the AGAD archives in Warsaw. This was before JRI-Poland began indexing records from east Galicia, so we were quite on our own.

We began with Skalat, which we had begun to realize was where many of the Pikholz families came from, and as I recall, our first order was for about thirty records - mostly births and a few deaths. We had no idea what we would be getting.

Among those records was the 4 October 1862 birth of Isak Josef to Selig Pick and Chane Kaczka. We knew that some Pikholz were recorded as Pick, but some really were just that, so we could not draw any conclusions about this one.


We also received a death record for Isak Josef Pik, age 78, who died on 21 March 1862 and it appeared that the October baby was named for the man who had died in March.

At about the same time, I ordered some records from Zalosce, where Hersch and family lived, and I learned that my grandfather's older brother Uncle Joe, was not Josef Isak, but Isak Josef.

Other records came in, including the birth in 1871 of Markus to David Zeiler and his wife Mincie Pikholz, the daughter of Selig and Chane. This and other related records made it clear that these Pick/Pik records were ours. So clearly this Selig - even now the only Selig anywhere among the Pikholz descendants - was the uncle of my great-grandfather Hersch Pikholz. And the fact that Hersch and Selig had both named a child Isak Josef, were a strong indication that the Isak Josef who died in 1862 was a common ancestor.

And there was an additional problem. My father had specifically said - because he had specifically been told - that they lived in the same place. But Hersch and family lived in Zalosce while Selig lived in Skalat. (Well, we knew that Hersch's wife's family, the Kwoczkas, were from Zalosce. Hersch himself seems to have been born in nearby Podkamen, a place with no records. And Skalat was quite a ways from Zalosce and Podkamen.)


So I applied the Sherlock Holmes logic ("when you have eliminated the impossible, whatever remains, however improbable, must be the truth") and came up with this scenario. Selig is not the brother of Isak Fischel but of his wife Rivka Feige, who was almost certainly born in Skalat. For reasons unknown, she married Isak Fischel [surname unknown] and they lived in Podkamen, where he was from. Three of their four children married people from Zalosce and lived there, but the daughter Bassie was sent back to Skalat to marry - that part is not speculation, we know it as truth. 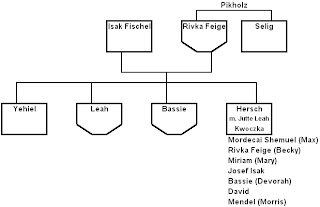 That scenario gives us a new diagram, one that is not influenced by what we have since learned


about the identity of Isak Fischel. It leaves open the precise relationship between Isak Josef the elder and Rivka Feige and Selig - likely their father or their grandfather, but not important for now which.

The movement between the towns and the distances involved blurs the issue of their living "in the same place," so I am not concerned about that for now.

Let me emphasize, that I have not entered these connections in my database. Selig still stands as the head of a family without being connected to parents or to a sister. I'd need actual proof to formally record them together. For now, it's just in the "comments."

But I am also left with the nagging question - why did my father know this? How important was Selig? Maybe he made the trip to visit in Zalosce. Maybe he and Rivka Feige were twins or otherwise particularly close. (We know that Isak Josef had at least one other son who lived in Skalat.) Who knows?

But there is another angle which may open the door to something else entirely.

Jutte Leah Kwoczka, the wife of Hersch came from a family who lived in Zalosce. There are no Jewish Kwoczkas anywhere else. Her father Mordecai Meir was known as Markus. Whenever the subject of Jutte Leah's family came up, it was always "Kwoczka, like duck." It was presented as the Yiddish translation.

There is another similar surname that appears in any number of Jewish communites in Poland - but in east Galicia it is concentrated in Skalat. That would be Kaczka. Selig's wife is Chane Kaczka. Her father is Markus. Perhaps the same family that is Kwoczka in Zalosce, is Kaczka in Skalat. Perhaps not only is Selig related to Hersch but their wives are cousins. That would account for his being singled out among the relatives for special mention.

Or maybe not, but it's worth considering. The most recent batch of records from AGAD includes sixteen records of Kazkas from Skalat, including the death record for Chane, Selig's wife, in 1873 at age forty-five. I have not begun to deal with them and it's not a top priority. But I am telling this story now for another reason.

The newest batch of records also includes the birth in 1896 of Bertha Zeiler, the daughter of Selig's grandson Markus. They lived in Stryyevka, just outside Zbarazh. So we now have a fourth generation for Selig - enough to officially count as a family in the Pikholz Project, not just an unconnected group.

The SELIG family now includes three children - Mincie, Markus and Isak Josef. Markus died in 1859 as a young child. We have no idea what happened to Isak Josef. Mincie and her husband David Zeiler had Markus in 1871 and Fischel in 1888 and maybe others in between. We have wives for both Markus and Fischel and now we have Bertha as well.

At this stage in our research, we celebrate the elimination of independent families which are merged into other families. I hope we shall be able to do that with the Selig family, especially since we are pretty sure how that merger would work. But for now we welcome this new four-generation Pikholz family, the family of Uncle Selig.

You can read Dina's story (or at least look at the pictures, if you do not read Hebrew) here.
Posted by IsraelP at 7:30 AM