I think I am giving myself a break this week. Not because nothing is happening but because there is too much happening.

Changed my mind.  Here are a few quick stories from the past week.


SEDER
We were at a hotel in Tiberias for the seder - not something we do often. The large group we were with was mostly English-speaking, though the majority were Anglos who live here, rather than tourists. We were joined there by my cousin Linda and her husband Mitch, who are visiting from West Virginia.

Of course, we have only one seder, but most of the tourists were keeping two days, so had a second seder. During the first day, I saw a sign in the lobby listing the rooms in which each of the various
tourist families would be having their second seder. The name LICHTIG jumped out at me, as the family of my wife's great-grandmother and partial namesake Rachel Hammer Silberstein had a number of connections with the Lichtig family. One of the third cousins lives in nearby Zefat and we hear from her upon the arrival of each new grandchild.

I inquired about the one with the second seder and it turns out he is a first cousin of the one in Zefat. I have his name and the names of his two younger brothers, but nothing further.

I spoke to the organizer, he made introductions and we had a very pleasant visit with this third cousin and his wife. The wife went to school with my brother-in-law and is a first cousin of my wife's best friend.

I left them my card and they will catch me up on the doings in their family.

I told this story to a friend who said "These things always happen to you." Maybe so, but if other people paid attention and made inquiries, they would probably happen to them as well.


THE REGISTERED LETTER
When we arrived home Wednesday, I saw that there was a note from the post office to pick up a registered letter. So I went in Thursday morning, stood in line, gave the man the notice and my ID card and he said he couldn't give me the letter because the name on the letter was not close enough to my own name. I prevailed upon him to let me see who the sender was and saw it was a woman in Tel Aviv for whom I had ordered some records from Poland. Although I had specifically told her "regular mail," she sent the check for NIS 90 (~$24) registered.

The clerk said he'd have to send it back. On second thought, I told him to go ahead, because if he didn't think the name was good enough, the bank probably wouldn't either.

When I got home, I sent an email to the woman advising her of the trouble she had caused. I'll be curious to see if she has sent a new check immediately or if she will wait to get the old one back before sending a new one. By regular mail.


THE GOLDSZTEYNS
A young cousin of mine was married recently in the US. (Her late father was my first cousin on my mother's side.) I asked her husband Matt to give me his pertinent information for my database and somehow it came up that his family was from Przasnysz (Poland) which is where my mother-in-law's mother's family comes from.

That is not a family I have done much work on. I knew that the parents of my wife's great-grandmother Hannah Dynah Lindenberg were Avraham Israel Lindenberg and Devorah Goldszteyn and that Devorah's parents were Izrael and Haia (both Goldszteyn), but that's all I had recorded. (There is a cousin in the US who had done much of the research there and I was content to leave it that way.)

So Matt tells me that he has a connection to this family and sent me to a Geni site run by a woman in Sweden which includes some of the earlier generations of that family. I made the contact, saw the tree that she had made, looked up the documentation and added this new (very primitive) page to my family website. 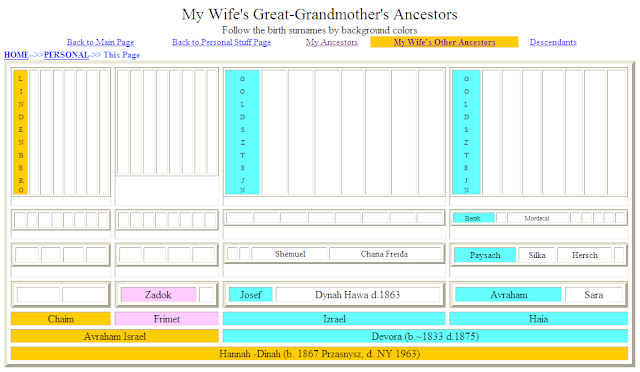 I am ordering the first few documents from LDS and we'll see how to proceed from there. I am not sure how much I want to put into this line.


PIKHOLZ DNA
In my pre-holiday summary of the latest research developments in the Pikholz Project, I made a pitch to the Pikholz descendants for financial contributions to the DNA project.

Contributions can be made at

http://www.familytreedna.com/group-general-fund-contribution.aspx?g=Pickholtz
and the first one has been received.

Asking for money has never been a strong point of mine. Soon I'll be asking for some autosomal DNA tests as well.

AARON THE JEWELER
A few months ago, I wrote about learning the identity of Aaron the singer, after his great-granddaughter Sharon contacted me from California.

A few days ago, Sharon wrote the following and said I could share it here on the blog.

Again, your email came so timely, as today we had a visit with the eldest grandchild of Aaron Lax, my cousin Joan Golfenbaum Sidell. She came out from New Mexico and visited her daughter Sue and grandson Justin, and we (my husband and I) met them in Seal Beach. We got to talking, and Joan later turned to me and asked if I had any more info from the Pickholz side. I said, Yes as a matter of fact, I just got birth records and a marriage record from Grandpa's nieces and nephews.

So she asked if I remembered her telling me of a ring Grandpa Aaron made for Gloria Swanson (famous US actress in 30's, 40's and 50's) and he made a duplicate for ma (grandma Pauline), but without the diamond, using a blue
zircon instead. Then she proceeds to hand me the box with the ring, and said, "I want to keep this in the family. It's yours." I was so touched, I had tears in my eyes, and was teary all the way home. You see, Aaron was a jeweler in Los Angeles/Hollywood area, and made many pieces for the top celebrities in the 30's and 40's. This is so special to me. I tried to get a good photo of it, but I don't have the right camera and lens. Maybe my son can get a good photo.

I am attaching the photo here. Plus our get together at lunch today. The picture, l-to -r is: Joan Sidell, Sue Sidell, Justin Sidell My cousin Jan's son), (myself) Sharon, and my husband Elliot Fisch. I give you permission to retell any part of this in your next blog whenever you do another one.

AND WITH THAT...
I shall wish everyone a happy conclusion to the Passover holiday.
Posted by IsraelP at 7:30 AM