The month of Adar is upon us. Here is last year's discussion of some of our Adar yahrzeits, including my paternal grandfather and my Uncle George.

There is some debate about the source of the name Pikholz. "Holz" is German for "wood" and as a result, those Pikholz who changed their names here in Israel took names that are based on words for tree - Etzion, Etzioni, Ilan, Allon etc.

There are two main schools of thought on the name Pikholz - one that it means "woodpecker" and one that it means "gatherer of wood" or some other wood-related occupation. On occasion I wondered if people moving from easten Europe to western Europe may have adopted a translation into another European language. In particular, I wondered if anyone going to Vienna or Germany had adopted the name Specht, which means "woodpecker" in German. I even joined a genealogy discussion list for the surname Specht, but everyone there has thusfar been totally Gentile.

So imagine my surprise when this showed up in my inbox in June 2007.


I recently came across your name on a Jewish Geneology website and I thought you might be able to help me. My grandmother's parents immigrated to the U.S. from the shtetl of Skalat in what was then considered Southeastern Poland, presentday Ukraine. I have been trying to locate some information on our family's history, and I was wondering if you could offer some suggestions on resources or tools for conducting the search. From my knowledge, my grandmother's father was Charles Specht from Skalat and he came to the Bronx NY during the 1910s. I was wondering if you had any info or records on his family. I am interested in connecting with my past. I could find out some more info for you if you need any. Thanks a lot and I look forward to hearing from you. David.

A Jewish Specht. From Skalat, no less, where our family comes from. I had a look at the Italian Genealogy Group marriage index (using Steve Morse's One-Step search utility) and found six Charles Specht who married in new York after 1910. One of those married a woman named Nettie Degen in 1914. David confirmed that this was the correct couple and added that they were second cousins.

There are Degens in Skalat records. We have a Degen-Pikholz couple from Skalat who had three sons in the 1870s. Maybe more, for all I know. So this whole line of inquiry suddenly looked very promising.

I found the 1891 birth of a Nechy Degen in Skalat, but the only Spechts in the area were in the Lwow/Przemysl area. I began to suspect that the connection to Skalat was only through the Degens and that the Specht-Pikholz-woodpecker axis was non-existent. Nettie's parents were Selig Degen and Chaje Perlmutter, neither of whom I recognized, but in theory Selig could have been an older son of the Degen-Pikholz couple.

David knew that his great-grandfather Charles had four brothers in New York - Louis, Harry, Jacob and Aaron, but he knew almost nothing about them. David's grandmother was not helpful. She wrote:

Thank you for the information about my mother and father: Nettie Degen and Charles Specht.
Unfortunately, we never discussed their life in Skalat. I think it was nothing they wished to remember. My interest is purely curiousity. ... I have no wish to become involved with possible distant relations.
I had a brother and sister, many first cousins, all of whom are now deceased. I was the youngest. Their children, my children's generation, are now in their 60's and the grandchildren are not particularly interested.
My parents left Skalat to come to America to become Americans. We were Jews without religious connections. After the holocaust it was clear that Jews needed a safe haven, so Israel seemed a logical solution. IT must be a very hard life.
I wish you well and all the best.

And a few days later she wrote:

I have already told you all that I know about my family's connection to Skalat. I know of no other names than the legal names they had here in the USA. There is nothing to be gained by pursueing this matter any further. Goodbye.

But I did want to see where the Spechts came from. I was going to the IAJGS Conference on Jewish Genealogy in Salt Lake City a few weeks later, so I figured it would be easy enough to check the marriage certificates in the library there. I had found the certificate numbers through Steve Morse's site and the Italian database and I had also asked some New York friends to see if we could find any of the graves.

These two grave photos arrived the Thursday I landed in Salt Lake City. 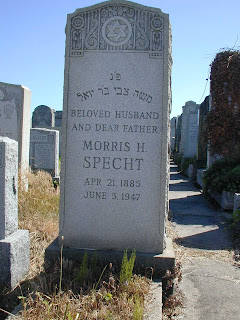 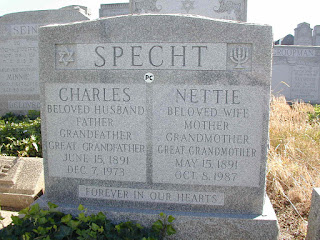 Nettie's birth year matched Nechy from Skalat, so that much looked good. Charles' stone has no Hebrew so we know neither his birth name (which was surely not Charles) nor his father's name. Morris is not one of the names David had given me, but he is Moshe Zvi, so he could be Harry. Morris' father is Joel.

The next morning I paid my first visit to the Family History Library. It is truly a remarkable place. I found the five brothers' marriage certificates. Although the spellings varied, in all five the father was listed as Joel or Joe Specht and the mother was Anna or Annie Borger or Berger or something like that. Nettie's parents are Selig Degen and Ida Perlmutter and Nettie is twenty-three years old, so this matches Nechy from the Skalat birth index.

The witnesses for the marriage of Charles and Nettie are Morris and Joseph Herschhorn.

Joseph Herschhorn is also the name of the bride's father on the marriage record for Harry (aka Morris) Specht - but I had no way to tell if this was the same person as the witness or if that was significant. 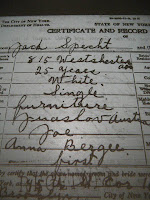 But I was looking for their town of birth. Four of the brothers wrote on their marriage certificates that they were from Austria, which was pretty useless. But Jack was more specific.

The word was not 100% clear, but now after looking back at the JRI-Poland index, it is clear that he wrote Jaroslaw. This was my point in including this story in the "Every Available Record" series, before it became the story of the Specht family. There may be no point to get the marriage records of all five brothers, but in this instance only one of the five recorded the specific information that I wanted.

However it turned out not to be precise.

There was a bit more correspondence with David over the next few months. I even received this note from his grandmother:

Thank you very much for your report.
I believe two of my mother's brothers (Degen) migrated to Israel. I think they married and had children. I believe I have some cousins in Israel. I do not know their names.
I don't know if you have access to Israel's records. If so, would you see if you can find anything about them

Looking for long-dead Degens in Israel without knowing their first names is no simple matter, especially when you consider that most Hebrew is written without vowels, making it hard to distinguish between the less common Degen and the way more common Dagan.

It became clear to me that this family was not part of the Pikholz Project and my attention was drawn to other matters.

Then about six weeks ago, David wrote again, more than five years after our last correspondence. I decided that I was going to treat this as a client relationship rather than a potential cousin, all things considered, so nothing much happened.

But in preparing this blog, I reviewed everything and looked at all the source material with fresh eyes.

There is a list of Spechts born in a smallish town called Pruchnik, which is ten miles from Jaroslaw and fifteen from Przemysl. There I saw the children of Joel Specht and his wife Chane Borgen or Bergen, including the five sons plus several others who died in childhood. Charles is listed as Osiais (=Joshua), born in 1890. There are quite a few Specht references, including four children born in Przemysl to another couple named Joel and Chana Specht in 1790-1798. So we know that this family has been Specht for at least another hundred years back and that they were in the Przemysl area all that time. 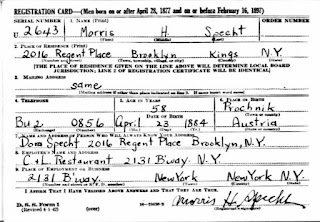 I went back to a different set of US records and found WWI and WWII draft cards both for Morris-Harry and for Charles, the two oldest of the five brothers. (The WWII cards for what was called the Old Men's Draft.)  Charles wrote that his birth place was "Galicia" (WWI) and "Poland" (WWII) but Morris is more specific. His card for WWII says he is from "Prochnik." From the birth records we know that to be true. Here again, "every available record."

Note that Pruchnik is in the Jaroslaw district and that explains how Jacob could reasonably have written "Jaroslaw" on his marriage record.

So clearly there is no connection between the Spechts and the Degens other than that they married one another. Except for the bit about their being second cousins. When David wrote six weeks ago, he said that although they were second cousins, they did not know that until they were in New York. 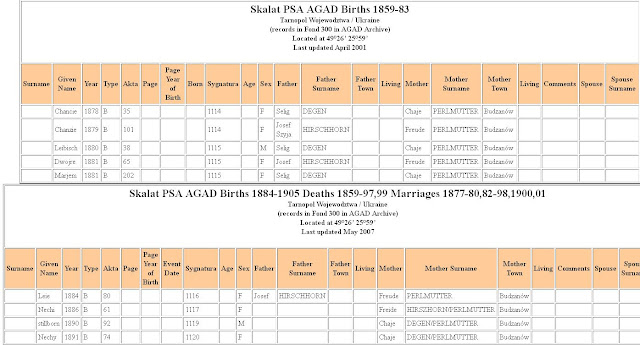 The Budzanow records do not show births for either of these Perlmutters, but there are many Perlmutters there. Some of them came from Skalat.

I do not know if this challenge is doable any more than I know if we can find the descendants of the Degen brothers in Israel. For now I am ordering Pruchnik records from Przemysl and my next order from Warsaw will include a few Degen and Perlmutter records from Skalat and Budzanow. Of course, I am NOT going to order Every Available Record, at least not for now. There are limits to these things.