My grandmother had told me that there was a branch of our Pickholtz family who had been in Denver for many years. These would be descendants of my great-grandfather's sister. Nana remembered that some of them had visited in Pittsburgh, perhaps in the late 1940s. The surname she knew was Francis, but her recollection of the given names was less clear. Of course she had no idea who might be there today and what their names might be - or even if they were still in Denver. This was eighteen years ago. 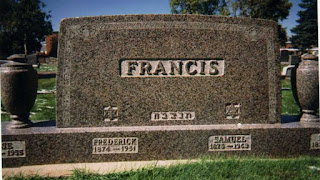 When I began doing more serious research a few years later, the Denver family was high on my list of priorities. One of the easier aspects of Denver research is the single, longtime, family-owned and very cooperative funeral home, Feldman Mortuary. Once I reached them, they were able to give me grave locations and contact information for Sadie and Sam Francis, Sadie's brother Fred Francis and his wife Rose and Sadie's daughter Jennie Pells. As I learned later Sadie had married a cousin and both families changed their surname from Frankel to Francis, though the Polish version Franzos had also been used.  The two couples are buried together in Mt. Nebo Cemetery.

Sadie's daughter Jennie is buried in the same cemetery. The folks at Feldman told me that the contact person for her was someone named Buzy Hahn. I supposed this was Jennie's son or daughter. I found out soon enough.

I had recently been in contact with Joe, a librarian in Denver, about some matter of his Galician research and I asked him if he could help me find this Buzy. Joe seemed to think this was pretty funny. Turns out that Buzy - or more properly Betty Lee - never had to be "found." If it was Jewish and Denver, she was there.

My third cousin Buzy was born sixteen years before me and we bonded quickly. She told me all about the family. There were her grandmother Sadie and great-uncle Fred who lived in Denver and another brother Abraham Franzos who lived in upstate New York. The parents - Buzy's great-grandparents Bassie Pickholz and David Lozel Frankel/Franzos - were buried in Port Jervis NY.

And there were "Little Max" and "Poor Jake." That's how Buzy referred to them.

"Little Max" was Sadie and Sam's younger son. He was born in July 1903 and died eighteen months later.  He is buried in Rose Hill Cemetery in Commerce City Colorado. There is no marker.

"Poor Jake" was a younger brother of Sadie and Fred and he was the reason that the family went to Denver to begin with. He had tuberculosis - "consumption" they called it then.

Bassie and David Lozel Frankel had nine children. Eventually we found birth records for all but Abraham. Buzy had never heard of most of them, as they died in childhood. After the first two, Sarah (Sadie) and Eisig Fischel (Fred) there were Chancie (1876-1876), Jente Gittel (1876-1882), Buncie (b. 1886 - no sign of her later), Feige Rifke (1888-1889) and an unnamed son who died in 1890 at fifteen days. Readers of this blog will recognize the names of Eisig Fischel and Feige Rifke as our (Buzy's and my) great-great-grandparents

And there was "Poor Jake." Because of his illness, Sadie and Fred went to Denver. He died in 1904 in his twenty-sixth year and was buried in Rose Hill Cemetery, where he was joined less than a year later by "Little Max." They are the only family we have in that particular cemetery. "Poor Jake" too had no stone, but Buzy decided that this was unacceptable and she had one made soon after we first spoke. 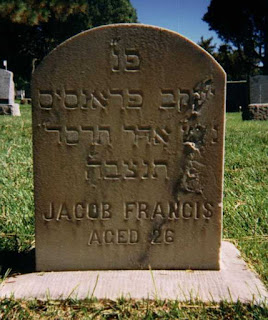 So about ninety-seven years after his death - on 19 Adar 5664 - "Poor Jake" has a tombstone. His yahrzeit is this Friday.

Sadie was active in the community from the start and was one of the founders of Jewish Consumptives' Relief Society, the sanitorium for those who suffered like "Poor Jake" from tuberculosis. Her first cousin - the daughter of my great-grandfather's other sister - Mary Braun Augenblick also lived in Denver for a time and she too was active in JCRS.

Buzy herself - Basche Leah, for the two sisters Bassie Pickholz Franzos and Leah Pickholz Braun - was active in so many aspects of the community and this is not the place for a eulogy.

After we made contact, she became more involved in the wider family. She made a trip to Pittsburgh to see the family there and then continued on to see the family of her great-uncle Abraham Franzos in New York. She hosted some of my family who visited Denver. She visited Israel several times, becoming great friends with my mother. And we went to Galicia together.

Back in those first days of my research, I had no idea where my own family was from. I knew my grandfather was born in Zalosce, but I was not at all sure if we belonged to the eastern Pikholz center in Skalat or the western group in Rozdol. But Buzy knew. She knew Skalat because her grandmother Sadie had been born there. And she wanted to go to see it, with me. So we did - together with Ephraim Pickholz of the Rozdol side.

Six years and two days after that trip, Buzy died, age seventy-four. I always call her "The Late Great Buzy Hahn" with only the greatest of respect. Her line is the sole surviving female line back to Rivka Feige Pikholz - perhaps we can get one of her children or one of her brothers to do a MtDNA test some day.

As I learned later, the four children of Isak Fischel and Rivka Feige Pikholz were probably born in Podkamen. Three of them, my great-grandfather, his sister Leah and the older brother Jachiel married people from nearby Zalosce and their children were born there. But Bassie married back in Skalat, where her parents had come from. And that is where her children were born. Sadie, Fred, Abraham, the ones who died and "Poor Jake."

There is now a tombstone for "Poor Jake" but that does not mitigate the use of his nickname. You see, a few months after Buzy put up the stone for Jacob Francis, Yaakov ben David Lozel, we found his birth record. This was before JRI-Poland began working with east Galician records and the search was sponsored by the Pikholz Project without the benefit of an index. 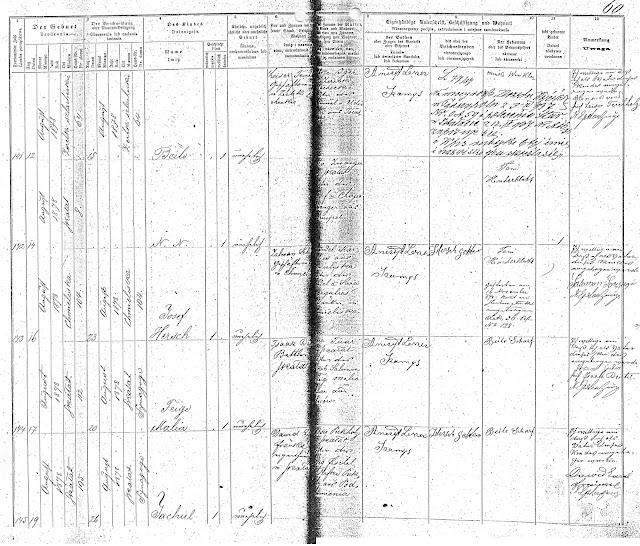 It's the one at the bottom of the page. He was born 19 August 1878 in house number 105 in Skalat and named on the eighth day in the synagogue. His parents are David Lozel Frankel of Skalat and Bassie Pickholz of Skalat, daughter of Eisig Fischel and Rifke Feige Pickholz of Podkamen.

But his given name is not Jacob / Yaakov. His name is Jachiel. The same as Bassie's brother.

So he has a tombstone, but with the wrong name. "Poor Jake" indeed.

Family Tree DNA is having a brief sale on its Y-chromosome tests - $39 for a basic twelve marker test. I have suggested to several of Skalat Pikholz descendants that they take advantage of the opportunity to get into the system and confirm that our families are in the same ballpark.  This price is good until 28 February - that is, it has to be ordered by then. There is no rush to actually do the test and of course it can be upgraded later.

In the meantime, the first of the Rozdol Pikholz descendants has ordered a test, so we'll see in a couple of months if there is a possibility of a connection between the Skalat and Rozdol families.