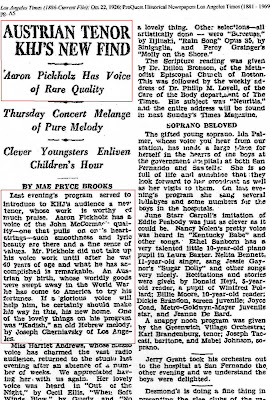 One of the nice things about the name Pickholtz is that it is both uncommon and unusual. As a result almost anyone who has ever met one, remembers the circumstances. Another result is that other researchers notice the name in the course of their own work and send me leads. Most leads of this sort are people I already know, but occasionally someone new pops up.

On 23 Mar 2005 at 22:29, Mitchell Sklar wrote:
> Israel,
>
> The Jewish Genealgoical Society of LA recently got a trial  subscription to ProQuest newspaper indexes. After searching my own family names, I tried searching for Pickholtz and  variants.
>
> I found a few matches in the New York Times and LA Times. Let  me know if you want me to email you any of the following articles as pdf files. I included file sizes in case that's a problem with your mail reader or connection speed.
>
> Aaron Pickholtz LA Times 22 Oct 1926 size 64 kB
> Short music review of singer Aaron Pickholtz from Austria.

That article appears here on the left. I outlined the relevant paragraph in red.

I had no idea who this Aaron may have been. I saw no reference to him later or earlier, not in the US or in Europe. I contacted the radio station and ASCAP, but got nowhere. I looked in my Given Name Analysis to see if there was any Pikholz descendant named Aaron of about the right birth year, which I figured would have been anywhere from 1860 to the early 1880s. Nothing.

I entered him in the Given Name Analysis as perhaps born 1880.

I would revisit this from time to time, but with no results. Until a few weeks ago, when I received an email from his granddaughter in California, Sharon Fisch.

She wrote as follows:

Dear Israel,
How delighted I am that I found you, your site, and my ancestors. I have been at this amateurly for 50 years, and more deeply in the last 3 years.
I never knew any more than my grandfather, Aaron Lax whose father was Jakob or Yacov. I found somee information that I was going to check out, when a distant relative contacted me, this past Tuesday, through my information I input on Find a Grave, regarding my Grandfather Aaron (Aron, Arrin, Arin)
Lax (Laches, Laks). He had me check out his site on My Heritage.com just two days ago. I then put in the family name of Pikholz, and Bickholz, as my great grandmother Gittel was named, and found the Rozdol birth lists, and your site and family tree.I am so excited. I have the rest of Aaron's tree, and can send you that now, and am working on biological information, nothing near as detailed or exciting as yours, but as I just wrote in your November blog, there are a couple individuals who made an impact on our Jewish community north of Los Angeles. Aaron was a cantor, and his son, my wonderful uncle Benjamin Lax, was local temple president, and founded Camp Ramah, a first of its kind Jewish Camp here north west of Los Angeles. He was a prominent figure here, and left us way too soon.

Let me know if you want me to send this family tree. The only documentation I have on Aaron Lax is a US military registration with his birth info, and a death certificate, plus a couple of US census records. We
are a small group but to me very vital.


Sharon had seen Aron Lax on one of my web pages and recognized him as her grandfather. I have his 1881 birth record from Zurawno. His mother Gittel is one of the ten children of Moses Pikholz and Sara Steg, on the main branch of the Rozdol Pikholz family. The age was right, he lived in Los Angeles and he was a cantor. Perhaps so as not to sully his cantorial image, he used his mother's name Pickholz on the radio.

(Only a few days ago, in another context, my cousin Jerry laughed at the idea that anyone might use Pickholtz as a stage name. I told him to stay tuned for this week's blog.)

Aaron Lax should have been on the Given Name Analysis, but was not. I guess I had missed him. Oops.

Nor had I ever searched for him or his older brother and sister in the US. I have five children each for his brother and sister - the sister's married name is Badian. I have not seen any traces of them other than the birth records, thusfar.


Neither Sharon nor I knows anything about the families of Aaron's sister and brother, but Aaron and his wife Perl (Pauline in the US) have forty-one descendants through four generations. Of their six children, two were born in Lwow (where Perl was from), three in Philadelphia and one in Los Angeles. Sharon has provided me with names and dates for the descendants and they are now in my database and on the Pikholz Project website, subject to the usual limitations due to privacy concerns.

We have nine new family graves in our virtual cemetery, mostly in Eden Memorial Park in California.

And we now have him in the list of Pikholz Pioneers who left Europe before WWII - with the passenger lists for Aaron in 1913 and Perl with the two children in 1914.

So we welcome Sharon and her extended family to the Pikholz Project and look forward to seeing what else is out there.

The meeting is at the Pisgat Ahuzzah Retirement Home, 6 Sinai Street (corner of Moriyah). Doors open at six-thirty, my lecture is at seven-fifteen. The lecture is in Hebrew.