Seventeen years ago, "IN Jerusalem," the local insert in the Friday Jerusalem POST, published an essay that I had written about a month earlier.

At the time, I lived ten minutes south of Bethlehem. Now I am to the north and west, still about ten minutes away but half that is traffic and stop lights. Getting there today is a security issue. Not so much that it is dangerous but that the army won't let you just drive in.

Here is the essay. The corny headline is theirs, not mine. Click on it to see a larger version. 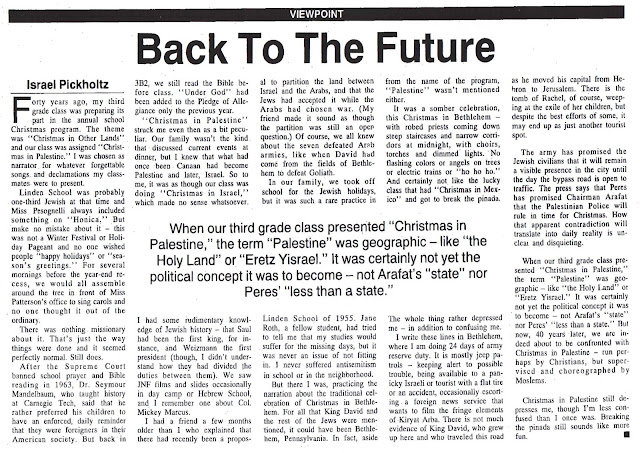 For that reserve duty, we reported directly to Bethlehem, where we received our uniforms and equipment. By the time we were finished, the quartermastery had been moved to Gush Etzion and it was from there that we were discharged.

The meeting is at the Pisgat Ahuzzah Retirement Home, 6 Sinai Street (corner of Moriyah). Doors open at six-thirty, my lecture is at seven-fifteen. The lecture is in Hebrew.
Posted by IsraelP at 7:30 AM