Eight weeks ago, I wrote about not knowing the maiden name of my great-grandmother, Etta Bryna, the wife of my namesake Israel David Rosenbloom. I would like to update that report with a couple of new documents, plus add some other points about the Rosenbloom family.﻿﻿﻿﻿

﻿﻿
﻿﻿
﻿﻿Uncle Hymen's application for marriage license﻿﻿
I said then that Uncle Hymen did not know his mother's maiden name when he filled out his SS-5 form for Social Security, as his mother had died when he was two. His sister, my grandmother, was nearly ten years older so almost certainly knew her mother's maiden name, but she was not registered with Social Security, so there was no document. Nor did the name appear on my grandparents marriage record, which my grandfather filled out. It ocurred to me, however, that when Uncle Hymen and Aunt Becky were married in Pittsburgh in 1919, my grandmother was certainly present and could have supplied their mother's maiden name on that occasion.

I ordered that 1919 marriage certificate. As you can see above on the left, it says Maiden name of Mother.....Don't know. So much for that.

Then there was the matter of their sister Rosie (Rachel Leah) Rosenbloom's death certificate. She died at twenty-three and is buried in New York (Mt. Zion Maspeth) but we have never been able to locate a death record. I had been hoping that the younger sister Shayna Liba would have supplied that information. 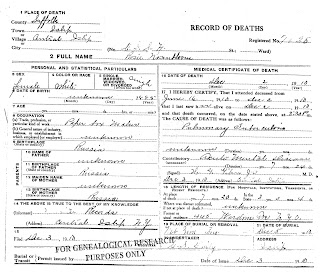 My friend Renee Steinig located the place of death - Central Islip State Hospital, a psyciatric facility on Long Island - and  obtained a copy of the death certificate. I had the impression that she had died of consumption and indeed the certificate shows the cause of death as "pulmonary tuberculosis." But mother's name - nothing. (No father's name either, for that matter. I guess it was part of being institutionalized.)

So here too, we are at a dead end. At least with the available resources.

I have six matches on my mitochondrial DNA - maybe something will come of that.

As long as I have reviewed what I know about our Rosenblooms, let be introduce the eldest sister, Alta. 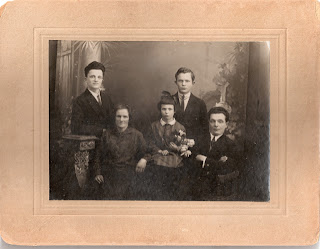 We think she was born about 1880. Her husband was Berl Kaplan and they had three sons and a daughter. The eldest son was Yaakov and one of the others was Baruch Yosef. We don't know the name of the third. The daughter was Etta Bryna.

The photograph here was taken in Moscow sometime in the 1920s. We are assuming that Berl had died by then.

The son on the left is the one whose name we don't know.

The last we know of any of this family is in 1930. At that time, two of the sons were married and each had a baby girl.

One of Uncle Hymen's grandsons  just told me that his grandfather had said that Israel David had "davened Lubavitch," that is, was affiliated with Habad.I had never known that.

Also please note, I will be speaking - in Hebrew - on Sunday, 10 June, 20 Sivan at 7 PM - at the Israel Genealogical Society's Giv'atayim branch, on the subject

BEYOND A DOUBT
What We Know vs. What We Can Prove
at the Shazar Center, 30 Yavnieli Street, Giv'atyaim.﻿ There is a small charge for non-members.
Posted by IsraelP at 4:47 PM