Mother's mother and maternal grandmother both died in the month of Nisan.

Her mother, Etta Bryna bat Yehudah the Levi died on the sixth of Nisan 5656, one hundred sixteen years ago. How old was she?  I can only guess. Almost surely in her mid to late thirties. Her eldest daughter was about eighteen. Her only living son was a few weeks short of his second birthday. The story is that there had been other sons who did not survive infancy, so the local rabbi suggested giving this one the name Chaim. Chaim Benzion, he was called. He was the only one we knew, aside from my grandmother herself, and I didn't exactly know her.﻿
﻿﻿
﻿﻿ ﻿ We are also missing Etta Bryna's maiden name. I am sure my grandmother would have known that, but no one ever asked her. Likely my grandfather too, because although they married in New York, they knew each other in Russia when he was courting her sister. Or maybe he didn't.


My great-grandfather (and namesake) married again soon after his wife died and the new wife - who had two children of her own - may have discouraged further connections with the dead wife's family. Maybe Etta Bryna's family didn't live in Borisov, so seeing them would have involved some effort. Or maybe they were in town and Uncle Hymen simply never realized they were his mother's kin. Uncle Hymen left Borisov for America when he was only twenty, so who knows what he once knew and later forgot.

But Uncle Hymen had some old pictures in his house on Carmody Drive and I had seen them when I visited. One showed his sister Shayna Libe standing next to Etta Bryna's grave. That's how I know the date. That's how I know her father's name. I should be showing you that picture here, but I cannot. The second cousin who has it will not show it to anyone. He barely - and rarely - admits to having it.

My grandmother had a hard life and when I knew her, she was old, unwell and and her list of languages didn't include much English, which is why I wrote above that I didn't exactly know her. She had been active in Russia's illegal Socialist movement and was involved in the first revolution, after the Russo-Japanese War, spending a couple of years in Siberia for her trouble. The whole family were Socialists.
﻿﻿
﻿

In 1910, she followed her two younger sisters to New York, arriving a few months before the death of the older of the two - Rachel Leah (Rose), who was the one my grandfather had really wanted. In 1914, Sarah married Raymond Gordon and they moved to Vandergrift Pennsylvania, a place she never liked. They raised five children, he owned a furniture store and she lived for those occasions when they would see the rest of the family in Washington DC and New York. (He would say "But we just saw them last year.")

But let's get back to Etta Bryna's maiden name.
We have four families - the Rosenblooms, the Jaffes and the Lichtermans from Borisov and the Gordons from nearby Dolginov - connected by marriage, at least.
We know that Uncle Hymen didn't remember his mother's maiden name, so his documents can tell us nothing.

The unmarried sister Rachel Leah died in 1910 and is buried in New York. Her sister Shayna Liba attended the funeral, so the mother's maiden name was definitely known by someone available. Unfortunately, we have not located the death certificate. 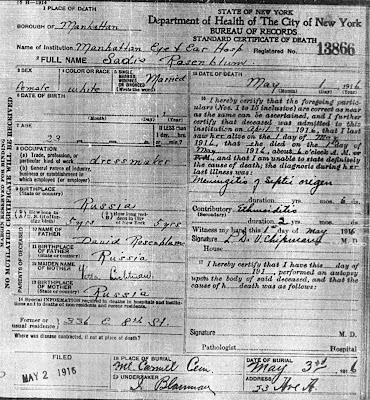 The younger sister, Shayna Liba died in 1916 and her death certificate has a number of oddities. Her name is listed as "Sadie Rosenblum," even though she was married to Julius/Yehudah Lichterman. (Uncle Hymen referred to him as "Zisal.") The certificate has no space for spouse's name or for informant's name, so we do not know who provided the information. Her father is recorded as "David Rosenblum," instead of "Israel David." (He was known as "Srul.") Her age is recorded as "23" when she was in fact twenty-six or twenty-seven and it says she lived in the US five years, when we know she was there since at least 1907. The certificate has her mother's name "Yetta Lichtman," but this is written in a different hand, as though it was added later, perhaps when a family member showed up with the information.

When I first saw this, it occurred to me that perhaps Etta Bryna's name was not Lichtman, but Lichterman, and that the daughter Shayna Libe (Sadie) had married her first cousin. This made exquisite sense given that both families were from Borisov. I saw no evidence of anyone named Lichtman in the Borisov area.


One more piece of evidence is my grandmother's passenger manifest.  When she went to the United States in 1910, her passage was paid by "cousin," despite the fact that she had a sister in New York (or New Jersey).  Her destination was identified as "cousin J. Ben...on, Brooklyn NY 517 New York Ave."

517 New York Avenue in Brooklyn in the 1910 census, but there is a 517 New Jersey Avenue.  At that address, we find a couple named Jake and Gittel Benenson. Jacob Benenson is also from Borisov as is his wife Gittel Lichterman, of that same Lichterman family. So perhaps when my grandmother said she was going to her cousin, she meant Mrs. Benenson, the Lichterman.

(Incidentally, the 1910 census has Eliyahu Ber and Mary (Gordon) Jaffe in the same building as the Benensons.)

So without much available in Borisov records, I concentrated on the question of whether the Lichtermans are Leviim. If their father Joseph was Etta Bryna's brother, the his children's tombstones might indicate that. Five of them were in the US. 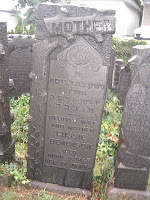 Julius disappeared soon after his wife's death and no one ever knew what became of him. They say he was heart-broken. Perhaps he returned to Russia, attracted to the successes of the Bolsheviks. In any case, no tombstone there.

Last summer, I visited the graves of Gittel (NY) and Alice (DC). Gittel's is a traditional stone, but no Levi reference. Alice's has no Hebrew. I also went to the find the grave of the brother David, in DC. There is no stone. Another brother, Nathan, is buried in Virginia and I have someone who promised to take a look. I have no great hopes.

Another brother, Chaim, died in Europe but two of his children came to Israel. His daughter doesn't know if they are Leviim and her brother's grave doesn't say. The two youngest Lichtermans, Paya Bluma and Nahum, supposedly never left Russia.

One would think that if Etta Bryna Rosenbloom is indeed the sister of Joseph Lichterman, there would be some overlap in their children's names. We know that Etta Bryna had sons who died young and there may be overlap with them that we cannot know. (Joseph has a son Yehudah, which was Etta Bryna's father's name, but that's not really significant.) There is no overlap among the daughters, but here too there may have been early deaths that we don't know about.

Then there is this:
﻿
﻿If the second person in this household is the Joseph Lichterman we know - which seems likely - the fact that he had a daughter Bryna (at the bottom) may reflect a relationship with our Etta Bryna.

This investigation is obviously not complete. There is much to be done and occasionally new documents become available. One of these days we may be able to make a determination.

As writing, this is a poor ending. As research too.
Posted by IsraelP at 12:00 PM