Some six hundred of the last Jews in the ghetto were marched out to burial pits that had been prepared in advance and shot. The only ones left were about four hundred in a labor camp and those who had hidden in the forest. 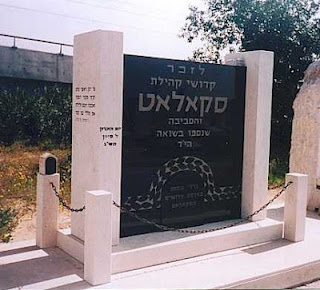 On Monday, the seventh of Sivan, the day after Shavuot here in Israel and the second day of Shavuot abroad, a group of survivors that gets smaller every year and a few descendants will meet at the monument to Skalat at the Holon Cemetery outside Tel-Aviv. Last year, we were maybe two dozen, but did not have a minyan.

Zvika will speak. His mother Yocheved will listen.

Shammai's family no longer comes. They used to be represented by three generations. Shammai and his wife were both from Skalat, but he died a few years ago on Shavuot - days after his son-in-law - and they meet elsewhere on that day for their personal memorial.

Jurek from Sweden has asked me to mention that his aunt who lived in California died a few months ago and I will do that.

I will no doubt see David from Netanya and his sister Zippi - their mother was Cyla Pikholz, who came with her husband back in the 1930s. Two of Cyla's sisters came after the War - Tonka is buried in Holon as well and Shufka is buried in Herzliyyah. Tonka wrote two articles in the Skalat memorial book. Her son has lived abroad for years and Shufka's kids never come. Two other sisters and the parents were killed in Skalat.


Perhaps my fourth cousin Leonora will come, if she can get off work. Her mother was Pikholz from all four of her grandparents. I call Leonora "my cousin from the cemetery" since that is where we most often meet. One of these weeks, I'll tell her story here. She has an uncle buried in Holon. Her mother never knew that her brother-in-law had survived.

To the suffering people of the Skalat community
to the fathers who took their lives in their hands,
in desparate attempt to save their children,
to the mothers who hair blanched
from pain and fear for their dear ones,
for those tortured and shot in the town streets,
in the ancient citadels
and on the banks of the river,
to the thousands taken in the death cars,
to Belzec, on the road of blood and suffering
and were ground to dust., to the few who dared
to jump from the speeding trains,
because they never quit or gave up hope,
even at the edge of destruction,
for the thousands at the pts of death,
fathers, mothers, grandfathers and grandmothers
brothers and sisters, counting the
last grains of sand in the hourglass,
their eyes desparate and no one comes to rescue,
to the brave, the daring, the fortunate,
who in that night of storm and unrest,
of hope and desparation, joined the fighters of
Kobpak and whose blood filled the path
of the Resistance in the Carpathian Mountains,
to the thousands of the community who were killed
with the cry of SHEMA YISRAEL on their lips,
to the few who remained, by miracle or by chance,
fewer every year, and during these many years
they carry the cries of the entire community,
and the greatest and heaviest cry of them all,
the cry of the dead and of the living, echoing
throughout the world, from then until the end of time:
MANKIND,  WHERE WERE YOU?

There is a whole row of these memorials along the eastern fence of the cemetery, and others elsewhere. Other towns are memorialized in other Israeli cemeteries. And graves which mention parents and brothers and sisters and others who were killed are common.


As readers of this blog may know, many of the Pikholz families came from Skalat. It is probably one family, but I have not yet succeeded in linking them all together.

My grandfather's grandmother Rivka-Feige Pikholz was born there, probably early 1820s. Her four children and most of her grandchildren were almost certainly born in Podkamen and Zalosce, though one daughter married a man from Skalat and her children were born there. Three of Rivka-Feige's children went to the United States.

Yad VaShem's Pinkas Kehillot series says that there were 3256 Jews in Skalat in 1890, out of a population of 5889. The number of Jews had gone down a bit by 1921, but after the Germans came in 1941, Jews from some of the smaller towns nearby were added to the population. Not always of their own volition.

There were five major killings of the Jews of Skalat. In the first three, Jews were taken by truck to Belzec and killed there. There are no records. That was when the Germans still thought that the world would object to the mass murder of Jews, so it was kept quiet and nothing was recorded. Eventually they realized that the world didn't care at all and the result was transports to industrial-sized death camps, often with meticulous records.

The first killing was 18 Elul 5702, 31 August 1942. Six hundred old and infirm. The Jews of the Judenrat had to deliver them to the Germans. That drove a wedge between the Judenrat and the rest of the Jews, but more important, it served the Germans' purposes by making Jews complicit.

Then what was called "the large killing" - 10 Heshvan 5703, 21 October 1942 - three thousand Jews. A few of those were "selected" for slave labor and a few others jumped from the trucks to freedom or (more likely) death. Freedom? - about fifty escaped and returned to Skalat. Where else was there to go?

For the last two killings, the Jews were simply marched out of town and shot beside open pits. Some died from the shooting, some from the burial. The first of those two was 2 Nisan 5703, 7 April 1943 - about seven hundred Jews. And the last six hundred on Shavuot.

There is more on Skalat. Much of the aggregation is my work, but some was done by the folks who took over the site.

And there are two memorial books - here and here.

We will be meeting Monday afternoon at five-thirty. That's ten-thirty on the east coast of the US. Right about the time some of you are saying yizkor. Perhaps you'll give a thought to the dead Jews of Skalat
Posted by IsraelP at 4:30 AM