A week ago, after Shabbat, I saw a notice of the death of Michal Esther Gispan. She was not yet fifty-four. Michal left a husband, four sons (19-29), a daughter in sixth grade, parents, a sister and a brother. She lived not far from us, but we had never met. But I know her father, a retired professor at the Hebrew University. And I am sure that I crossed paths with her husband when we were both in Yeroham thirty-six years ago.

I went over to the house Monday morning. There have been mourning signs all around the neighborhood all week, even more than for Prof. Benzion Netanyahu, who lived two blocks away.

SEARCHING IN BUDAPEST
Years ago, when I was making my first inventory of Pikholz descendants, I came across a Henrik Pickholz buried in Tel-Aviv. He had died in 1983 at age seventy-one. According to his tombstone, his father was Moshe - we have many of those. I was able to determine that Henrik had two daughters living abroad, but they were not cooperative and I learned nothing more from them. I was told by his ex-wife that his brothers and sisters had all been killed, but she knew no names or anything. 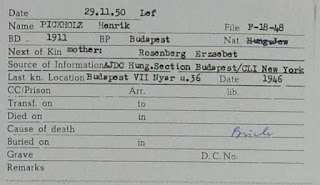 When I first searched the old Bad Arolsen microfilms at Yad Vashem, I found a card for Henrik, with a Budapest address. It listed his mother as Erzsebet Rosenberg. Nothing else and no cards for other family members.

A few years later, I commissioned a researcher in Budapest to see what he could find. He came  back with this:

I recognized the 2 February 1870 birth date from a set of records we had acquired earlier so I could easily place Henrik and his family into the overall Pikholz structure. From other sources, I found that the two older sisters had sons soon after WWI, but I have made no further progress with this family.

The researcher also had something else.


Also found children of Izsak / Yitzhak Tallenberg-Pikholz and Feige Meles-Silber.
(I writing Tallenberg-Pikholz, because the records also mentioned him as "Tallenberg other Pickholz" named.
Dezso / Shmuel, 1905. December 18.
Matild / Motl, 1907. April 16.
Aranka / Golda, 1908. July 4.
As the records, Izsak Tallenberg-Pikholz was born in Boryslaw, Galicia, and Feige Meles was born in Horodenka, Galicia. They lived Budapest VII. (Seventh district or ward), Dob u. 69.
As the civil birth record of Dezso, Izsak was born around 1877, and Feige around 1882. This record shown their marriage 1905. December 26 in Budapest, but I did not found it. Also this civil record corrected the mother name: Gitel Feige Silber, instead of Feige Meles.

The Boryslaw birth records for 1877 are missing but I was quite sure that the parents of Yitzhak were David Samuel Pikholz of Rozdol and Sara Thalenberg of Boryslaw, thus accounting for the two surnames he used.

So Yitzhak had three children, born in Budapest nearly a hundred years ago. Knowing nothing of any of that family, I assumed that this was another trail that was to lead nowhere, as with so many from that period in Europe.  I added them to the family website and that was the end of that.

NOT SO FAST
Fourteen months later, I received this:


My name is Mordechai Kremer and I am the grandson of Yicchak Tallenberg and (Gitel) Feige Silber (or Schuchner, not Meles). I read your internet site with great interest and in the following I would like to supply you with some additional information concerning our branch of the family.


Data on the 5-th generation:

This kind of thing happens from time time - that's one reason for laying it out on the Internet - but the thrill of it never gets old.Yitzhak had died in 1941 of an illness, but his wife and daughters came here to Jerusalem and Golda was still living at age ninety-seven! And Deszo - who carried the ancestral name David Samuel - was a physician who served in the Spanish Civil War. And there were additional generations, beginning with Mordechai's daughter Michal Gispan and her five children.

In addition to the booklet that the family prepared in memory of Deszo, Mordechai wrote up his own experiences growing up in Budapest, the war years, making aliyah and the years leading up to his marriage to US-born Ruth. He showed me both of these when we met, soon after his first making contact. Each story was its own kind of heroics.

Later I met with his aunt, Golda Engel, who lived into her 102nd year. Born in Budapest, lost her husband, but survived and eventually died in Jerusalem.

So now I have met Michal's family, here in Jerusalem. We will try to maintain contact, perhaps as soon as the unveiling in a few weeks in the Yemenite section on Har HaMenuhot. Before then, I will be in touch with Mordechai to make sure I have names and dates any spouses and grandchildren.

A generation passes and another emerges. It is that much harder when it is not in the natural order.

It is not always easy to turn the dry data into flesh and blood - I certainly struggle to do so here - but I'll try my best.
AM YISRAEL HAI.  עם ישראל חי.
Posted by IsraelP at 8:00 PM