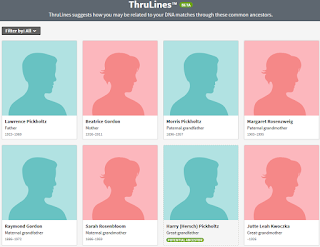 One week ago, I began seeing announcements on Facebook and on the genealogy blogs and discussion groups that Ancestry had announced a new feature called ThruLines. The overview of their fact sheet explained it thus:


ThruLines™​ shows you the common ancestors who likely connect you to your AncestryDNA® Matches—and gives you a clear and simple view of how you’re all related. When you link your public or private searchable family tree to your AncestryDNA results, new chapters of your family story may be revealed. You could see how your DNA Matches fit into your family tree and learn new details about the common ancestors who likely connect you.

Now let's not forget that Ancestry has long had "hint leaves" that tell you about supposed connections. These are not the alerts that FTDNA, MyHeritage and occasionally 23 and Me send out telling you about DNA matches, but are non-DNA tree sources that you can see when you visit the Ancestry site on your own initiative. Here is an example, on the right.

Not interested, push the black IGNORE button. Otherwise push the green REVIEW button and get something like this: 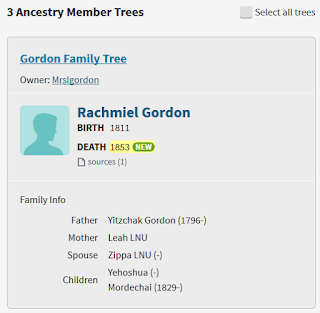 So, I recognize the "owner" as the wife of my cousin, who has essentially copied my own data for this part of her tree. They suggest I have three trees of interest connecting to my third great-grandfather Rachmiel Gordon and this is the first. (In this case, I'd like an ignore button, but there isn't one.)

ThruLines is supposed to be different, apparently based on DNA connections and meant to add new ancestors based on work done by other people. So I had a look.

I have a few things I wish Ancestry would address and they are marked below in red.

ThruLines tiles my screen with icons of over fifty ancestors, with about twenty marked with a green "potential ancestor" tag. (See the figure at the top of this page.) The icons are huge and would be easier to work with if they were a quarter the size or even smaller. I do not have photographs attached to my tree, but those who do see the actual people, not the pink, blue and grey generic images. I;ll probably add a few when I have a chance.

The "potential ancestor" tags are attached to named, known ancestors, as well as several categories of others.

There were four "potential ancestor" tags on known ancestors, eleven unknown but named people, six marked "private" and the one fifth great-grandmother with no identification. I immediately recognized four of the eleven as named known ancestors - two couples - that are flat out wrong because I know who belongs in those spaces. Somehow without my doing anything about it, one of the two couples has since disappeared. I'd like to know how that worked. And I'd like to get rid of the second couple. This is an example of a need for a "DISMISS" button

You can filter the ancestor page to make it easier to work with them. For instance, to show only the potential ancestors. Unfortunately when you look at one and then go back to the ancestors page, the filter disappears and you have to set it up again. That should be fixed.

The four named, known ancestors
I have no idea why my great-grandfather Hersch Pikholz and my third great grandfather Simon (Shimshim) Rosenzweig are labelled as potential ancestors. I have both of them on my tree. ThruLines names people who added them to their trees - in one case a cousin Anne on the Rosenzweig side added Hersch Pikholz as a Rosenzweig father-in-law.

In the second case, the tree owner is a fellow named Dov who has not yet responded to my "who are you?" inquiry. He added a mother, Susanna, to the named ancestor Simon Rosenzweig. After I talk to him, I hope to find out what his sources are and whether to integrate this ancestor into my own database and tree.

Incidentally, another researcher also added this same mother, Susanna, to Simon. When I wrote to him to clarify what his source is, he replied "There are 187,000 people in my family tree, data come mostly from the Internet. The data of Susanna and her relatives are derived from MyHeritage.com." Gotta be careful.

The third had no new information aside from the mention of a tree-owner who is a relative of my cousin Jessica's husband Matt. I have seen him in the hints and he is probably getting tired of my asking him who he is. In the meantime, the tag on that ancestor has mysteriously disappeared with no indication why. This is another example of a need for a "DISMISS" button - but if it disappears on its own, maybe not.

The fourth  is Jacob Zelinka. my fourth great-grandfather. I know his father to be Leopold/Levko.ThruLines tells me this: 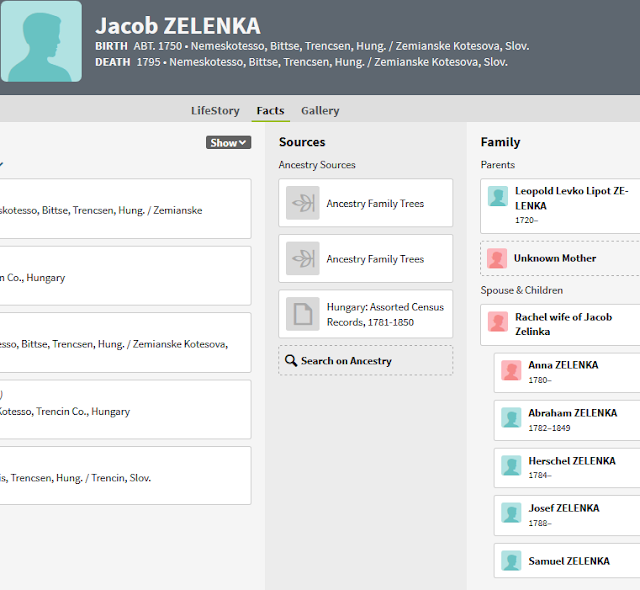 I know the five children listed here and descendants of three. The owner of the tree that ThruLines shows me has this tree for a client she has been working with for years and is limited in what she can tell me. But ThruLines also shows me this: 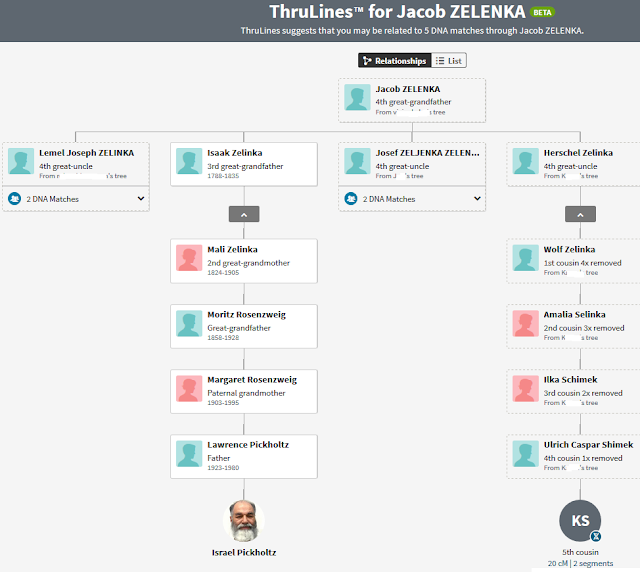 Here we lose two of Jacob's children, but have a new one - Josef, who exists alongside Lemel Josef. I have known about this problem for some time and I suppose I shall have to deal with it. I know descendants of both of them. Some of the DNA matches listed are new to me and I'll have to follow those up too.

Three new generations for Etta Bryna?
My mother's maternal grandmother is my most recent brick wall. We know her father's given name and that he was a Levi. ThruLines adds a father, grandfather and great-grandfather - Juda Gurevich/Halevi, Shmerka and Urvater (=ancestor) Gurevich/Halevi - provided by a woman in Germany  who does not identify her connection to these gentlemen. I have written to her and look forward to hearing what she has to offer in the way of evidence. 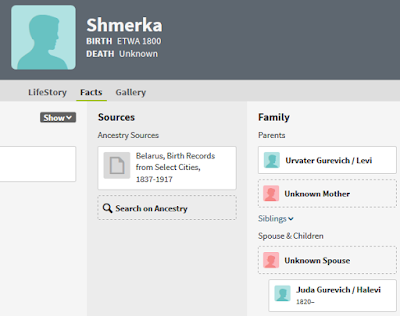 One of the private potential ancestors is the supposed wife of Juda Gurevich, Tojba Shpunt Spunt, who appears in the tree of my Borisov collaborator Galit. She isn't sure that Tojba really belongs there. I'll address this after I hear from the woman in Germany. 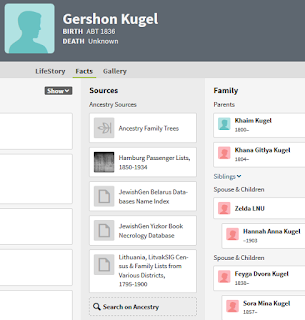 Gershon Kugel's parents
My mother's paternal great-grandfather Gershon Kugel's parents are quite unknown, but ThruLines has names for both - Khaim Kugel and Khana Gitla Kugel. My great-grandmother is Chana, so Gershon's mother's name makes sense. The information comes from a woman I have been in touch with previously and I am waiting to hear what she has to say about the new Kugel ancestral couple.

Her tree has my Chana, but not her known brothers. She also has a second wife for Gershon - Feyga Dvora Kugel and a daughter Sora Mina Kugel (b. 1857). That may work. In any case, there is no indication how the tree owner fits in here - or how she knows what she knows. 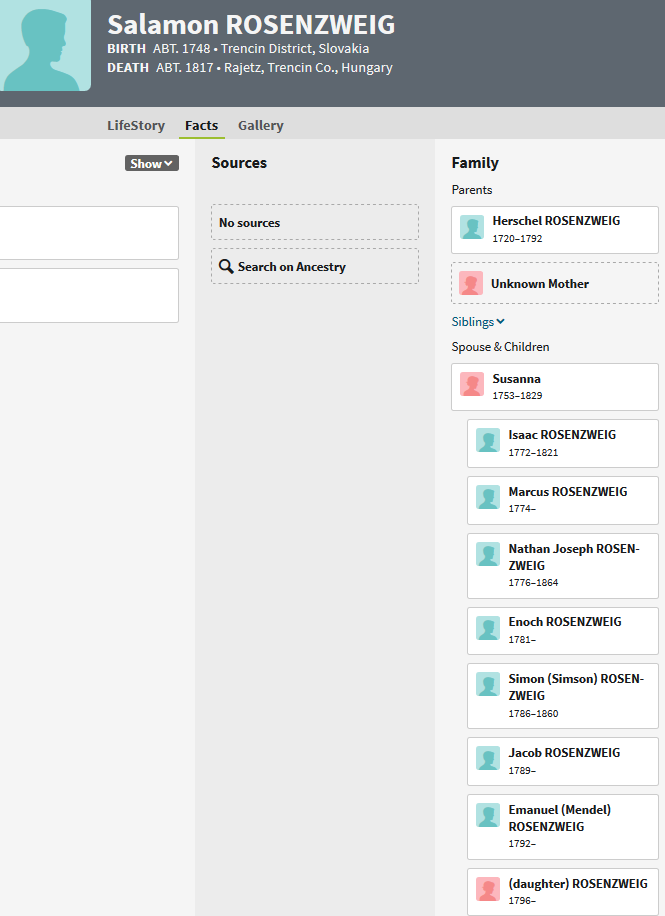 The owner of the tree here is probably the best of the Trencin County researchers and he gave me his source information (without the document itself and without telling me where it came from). I will accept Herschel and his children on that basis. As well as the new descendants of Solomon.

Oh, and Hershel has another son, Moses with two wives and ten children. Lots of new good information here. 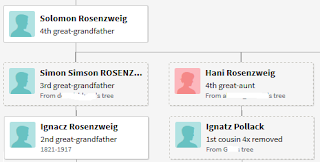 But here it gets complicated and Ancestry makes it difficult to show it all here because the results change depending on which way I go into them. One way it shows Solomon Rosenzweig with three children - Nathan Joseph, Simon and a daughter Hani who married Ahron Pollack. There are three contact people for that Pollack line and I have been in touch with all of them in the past few days.

The problem is that according to the reliable researcher who brought us Herschel, Hani is not the daughter of Solomon, but rather the daughter of Herschel's other son Moses. I am going to let them work it out between them because they have better access to the documentation than I do. 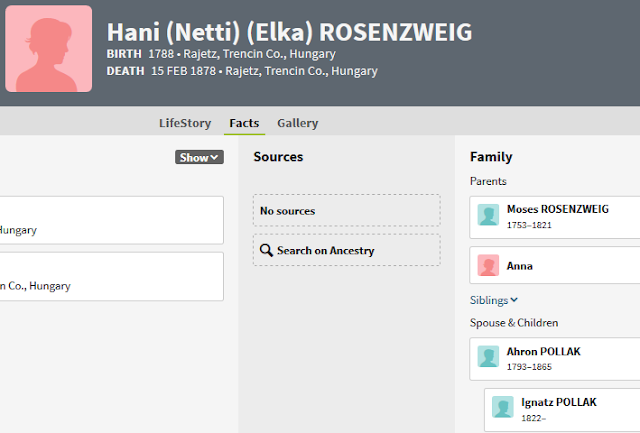 Lesson learned - you cannot assume the ThruLines connections to be correct. You must check them one by one. You can decide to trust specific researchers, but you must be very careful.

Oh, and one more thing. Now that Ancestry has decided that Herschel Rosenzweig is the father of Solomon - which is almost certainly correct - their old-style hints have brought me more than half a dozen other researchers working on the same family. I have dropped notes to all of them.

Keep in mind, if Herschel is wrong, I would still be getting all these new hints to follow up with. Be careful out there!

One more note - they tell you who has done DNA testing but there seems to be no real use of DNA in the ThruLines algorithms. But make no mistake about it, ThruLines is a valuable tool. Keeping track of new developments may be a chore, plus of course running after the other tree owners to figure out what is right and what is false.

It is my hope that this book will encourage and inspire other researchers of their European Jewish families and other endogamous populations to say “I can do this!”
Posted by IsraelP at 12:23 AM