I see many people - both on Facebook and in personal correspondence - who have no idea what to do with GEDmatch matches or even if the whole GEDmatch experience is worthwhile. So here is the beginning of a case study.

Yesterday morning I received an inquiry from Eric, a  fellow here in the neighborhood. His wife Cheryl had just done a Family Finder test and he had uploaded the results to GEDmatch. It seems that one of her top matches is with someone in my Pikholz Project who appears on the GEDmatch one-to-one with a match of 124 cM and a longest segment of 40.5 cM. Eric wanted to know how this match sounds to me. 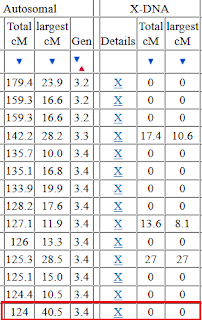 A single segment of 40 cM looks like a third cousin or closer - maybe a fourth. In any case, probably not something from the 1700s. In a word, promising.

I had a look and saw that this particular match is a Pikholz descendant from Skalat, a man named Gene whose mother is descended from Berl Pikholz (~1789-1877). Berl's precise relationship to the other Pikholz Skalat families of that period is unclear and there is no one to test for Y-DNA. Gene has Pikholz third cousins who have tested and his kit is managed by a cousin on his father's side. My obvious first suggestion was that Eric contact Gene's cousin (whose email appears on Gene's FTDNA kit).

Then I had a look. First of all, Gene is Cheryl's fourteenth best match on GEDmatch, though it is not obvious why the other thirteen are better matches. 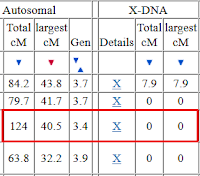 I sorted on the "Longest cM" column and Gene is Cheryl's third longest matching segment. 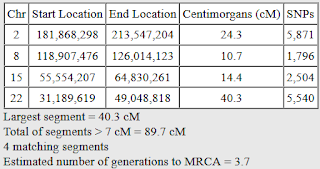 I assumed that the other 84 cM in Cheryl's match with Gene is made up of  many small segments so I did a one-to-one between Cheryl and Gene . I was surprised to see that this showed only four segments, including one of 24 cM.

(The total is different - 89.7 cM as opposed to 124 cM - because one-to-many uses segments smaller that one-to-one. Perhaps the thirteen "better matches" don't have so many of these small segments.)

This looked promising, even though I could not tell if these four segments represent one, two, three or four different common ancestors. I also looked at Cheryl's other matches to my families and saw some of interest. I suggested that Eric come over so I could show him how I think he should proceed. He came later that day. 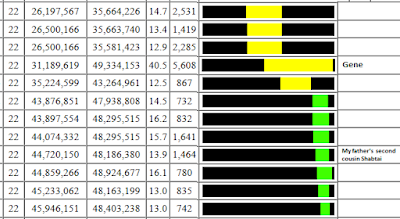 Although he is a regular reader of my blog, this was Eric's first hands-on interaction with GEDmatch's Tier1. We looked at Cheryl's matches on chromosome 22 using the Matching Segments tool, with the minimum set to 12 cM.

There are eleven kits which match Cheryl on parts of the segment she shares with Gene. (Gene is far and away her largest match.) They don't necessarily all match Gene, as some may match Cheryl's mother with others matching her father - and we have no idea which side Gene is on. I left it to Eric to triangulate to see which of the eleven match both Cheryl AND Gene. (One of those eleven is my father's cousin Shabtai and his kit does triangulate.) 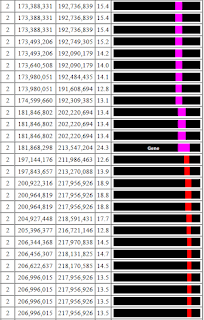 Those eleven kits are listed with names and contact emails and I suggested to Eric that he contact at least the ones that triangulate. But first we did Matching Segments again, this time for the 24.3 cM segment on chromosome 2.

Here Cheryl has many more matches. What I wanted to see is whether any of the people she matches on chromosome 22 also match her on chromosome 2. That would hint  at the common ancestor being the same as on chromosome 22. There are none - at least not with 12 cM or more.

I suggested he do all this before contacting Gene's cousin - the one who manages his kit. My suspicion is that the cousin cannot help much with this, as he himself does not seem to appear among Cheryl's matches.

As a matter of due diligence, we also looked at Cheryl's matches with one of Gene's Pikholz third

cousins who shows up with a small match on the Cheryl's one-to-many. The third cousin indeed shows up with 5.5 cM on Cheryl's segment with Gene on chromosome 2 but the segment does not triangulate, so this is not meaningful.


This is meant to be a series, so I expect to be back with the results of Eric's efforts. I  also will have some things to say about Cheryl's matches with the rest of my family, perhaps later this week.

Housekeeping notes
With the help of my Russian-speaking colleague Galit, we have ordered a test from FTDNA during their current $39 sale, for a Pikholz descendant in St. Petersburg. He is a nephew of one of our mystery Pikholz descendants whose DNA results raised more questions than it answered.

We may have a second new one as well.
Posted by IsraelP at 5:40 PM