Following my recent post about the critical 1901 Pinchas Pikholz death record, Mark Halpern sent me the Excel file with the full set of newly indexed Rozdol records - 1898-1914 deaths and 1903-1916 marriages.

Marriages
There are nine marriages which include people named Pickholz, all of them people I know. The new records fill in birth dates and names of the spouses' parents. Some of that is new. Some of the birth dates are not what I have from the actual birth records, but there is always a risk in trusting birth information from death records..

Two of the marriage records are particularly valuable as they identified the parents of the Pickholz grooms. In both cases the men are over fifty years old and reflect the 1915 registrations of Jewish marriages that had no doubt been held years earlier.

One is Dawid Pickholz and his wife Tauba Gitel Muhlrad for whom we have four chldren born 1888-1903. The other is Israel Pickholz and his wife Gitel Bauer for whom we have six children born 1886-1902. These two men are brothers, the children of Abraham Pikholz and Taube Kraut of what I call the IF3 family. I already had their birth records but had nothing to connect those two adult men to those specific births. Until now. 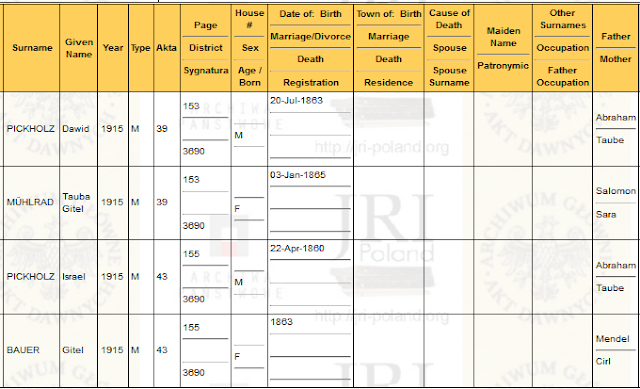 Births
There are thirty-two newly indexed births. Twenty-three are young children, all but three I already knew of. In some cases I already knew they died because there were notes to that effect on the birth records. I have recorded the three new ones and will get them onto the project web site when I have a chance.

The adults are between the ages of thirty and eighty-five. Five of the nine have no new information except death years and ages. A sixth is Pinkas whom I discussed earlier this week.

Then there are the other three.

Sara Rosenzweig is the wife of (Israel) Hersch Leib Pikholz. He was born in 1835 and according to this index entry, she would have been born about 1837, so this should be an easy call - especially as there is no one else it can be.

The birth records of her children show her parents as Israel and Golda, but the parents here are Markus and Rojse. My guess is that the death record is wrong - perhaps in the transcription, perhaps in the original. But until the scan of the original is available, I cannot make a judgement. 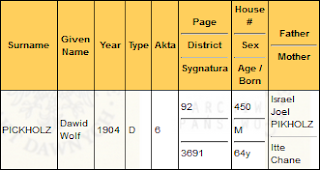 Dawid Wolf Pickholz died in 1904 at the age of 64, so he would have been born in about 1840. His parents are Israel Joel (known to have been born in 1807) and Itta Chane. Looks pretty straight-forward. The problem is that I know him to be the son of Israel Joel's eldest son Moshe. But maybe not. It certainly makes more sense for Dawid Wolf to have a thirty-three year old father than a thirty-three year old grandfather. (Until now we had no age for Dawid Wolf, whose eldest son was born in 1862.)

Moses' descendants said he had ten children and we know of nine besides Dawid Wolf, so if he is not Moses' son, there is likely another who has not been identified.

I expect that the death record is correct and I will have to move Dawid Wolf up one generation, but I will have to locate my notes that led to the original decision. (Dawid Wolf has known living descendants in Chicago.)

This is a perfect match for a birth record from 13 October 1840 for Sara Bikholz who was born to Izig and Feyga in house 295, a house where Pikholz births took place over many years.

This is part of the Isak-Feige problem that I alluded to earlier this week. There may be two couples named Isak and Feige Pikholz and these two birth records are for two different children. (To be clear, the existence of these two birth records is not the only thing pointing to two identically-named couples, but it is the one in front of me now.)

The problem is complicated and over many years I have come to believe that it is intractable. But perhaps the death records can tell us something. This one, in the name of Sara, is the only one I have seen so far. I have not seen one for Sara Rivka in the families of her probable descendants. There is one child definitely named for her in 1911, but that is after this 1909 death record. If there were a Sara Rivka from one of the descendant families, born before this 1909 death record, I could say with confidence that Sara and Sara Rivka are two different people.

The odd thing is that there is no reference at all to "Sara" other than the birth and the death. It would be a tough sell to say that a woman known as Sara Rivka in all her documents would be just Sara at birth and death, even if we could explain away the second birth record.

There may be a solution here, but I believe that if I find it, it will be from some place unexpected.
Posted by IsraelP at 12:11 PM