Thursday evening I received an email announcement in Hebrew from MyHeritage, announcing that they have approximately 67,000 petitions for naturalization from the British Mandatory Government in Palestine, for the period 1937-1947.

I never renewed my MyHeritage subscription after a one trial year, but since I have extensive experience with the Mandatory Citizenship records, I figured I should at least see what they are offering.

The Israel National Archives used to be five minutes from home, so I was a frequent visitor. There is an index of their files from about 1933, on microfilm. Each frame is an indexcard and they are arranged by surname, using some sort of Soundex. All the spellings of a name are listed on the same card or set of cards. The cards are supposed to have given name, year of birth, town of birth and file number but sometimes the birthplace or year is missing.

The file number enabled me to order the specific file. They say that about a third of the actual files were lost, perhaps trashed by the British before they left. The pre-1933 files were lost even before the index was made. Remember, these are British files, so everything is in English, though some of the forms are in Hebrew as well.

A few years ago, the National Archives moved across town to a place much less accessible and with no convenient parking and about the same time the indispensible research assistant Helena (whom I ran into at the mall just this week) retired.

But they made an attempt to put whatever they had online. Sometimes this proves successful. So this MyHeritage announcement should be an excellent development, at least for anyone who has their paid membership.

I followed the link in their promo letter and searched "Pikholz" in both their Hebrew and English versions and wrote the name in both languages. All the searches gave me the same twenty-one results, though they were presented slightly differently from one version to the other. Six of the twenty-one are Buchholz, so there are actually fifteen.

The blue lines are links, all of which lead to their subscription page. I was not able to enlarge the image on the left.

Their list of fifteen includes the last four on the index card above, plus Mordechaj from Bialystok on the third line of the index card, but the birth year is 1912 instead of 1914. I have that file and it says 1914, so MyHeritage's 1912 must be a mistranscription.

The seven entries on the index card which MyHeritage does not have include several whose naturalizations were definitely in the 1937-1947 period which My Heritage says it covers.

Of the ten which My Heritage has and the index card does not, five are women:


Cyla Pikholz Dlugacz. I know her children. She is in her husband's file as they married in Skalat before their immigration. MyHeritage calls her "Chila."

Chaya Sara Bitan. She is the first wife of Dr. Fischel Pickholz and is mentioned in his file. MyHeritage spells her maiden name "Betten."

Blanka Rindenan (1922). This should be Rindenau. She is the first wife of Gustav from the index card and is named in his file.

Betty Hilsenrath (1910). She is the first wife of Mathias (on the index card) and is named in his file

Dora Neuman (1912). She appears in the file of her husband Josef Neuman and they have a daughter Esther Thema. I have to find out who they are. She was from Tarnopol. One of their character witnesses is a Queller, which is a Zalosce name. We have a Pikholz-Qualer marriage, so she may be from that family.

And the five men that MyHeritage has and the index card doesn't.


Dr. Pickholz (1875). I would think that is Eliezer Haniel who discovered oil in Kibbutz Hulda, but he was born in 1880. Close enough? Maybe. So why isn't he on the index card?

Fischel Pickholz. No birth year. This is Ephraim, the older brother of Wolf from the index card. We went to Galicia together seventeen years ago. I have no idea why he is not on the index card. 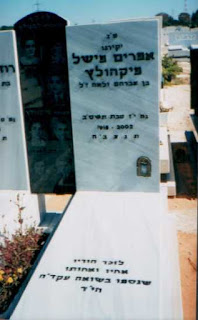 M. Pickholz appears in the citizenship file of Benjamin Swierdlin as a character witness.

Finally, there are two files in the name of Moshe Pikholz, though MyHeritage uses the spellings Pikholz, Pikholtz, Pinkholz and Pikhole. One is listed as born 1871 and the other 1926. I do not know who they are.

This appears to be a useful database, though no one should see it as complete. The National Archives has more. Of course, it requires a subscription.

Housekeeping notes
On 8 January, I shall be giving two presentations for the genealogy course run by Yad Vashem and the Central Zionist Archives, "From Roots to Trees." Both in Hebrew.


5:30-6:15 – The Importance to Genealogy of Understanding Jewish Culture and Customs
6:16-7:00 – Using Genetics for Genealogy Research