Tara's matches
It began last Thursday mornng with a note from professed newbie Tara in Toronto. It seems that when she sorted her GEDmatch results by "longest segment," her top four matches all pointed to my email address.

Tara matches forty-one members of my project, but it is an eclectic group. All six of my parents' children were there, but not my father's sister and brother. And despite my X match, which is from my mother's side, there is only one second cousin from that side.

I did a few chromosome browsers and distilled the results to a single chromosome of interest - chromosome 3.

The small bit on the left side of the centromere is something I wouldn't bother mentioning, but it's right here in front of me. The five blue segments are my parents' children and the 12.5 cM green segment is my half second cousin Fred. The triangulation is good. So while this is not a large match, it does point someplace fairly specific - my Rosenzweig/Zelinka side from Trencin County Slovakia. That does not fit Tara's surnames or geography, which is largely Romanian.

The action is on the other side, where we begin with Herb's 70 cM segment in orange. On the left side of that segment, my sister Amy has 39 cM. On the right side of Herb's segment on lines 5 and 7, my sister Judith and my second cousin Terry have ~23.5 cM, my sister Sarajoy (line 6) has nearly 20 cM and the mysterious Vladimir (line 8) has 13.5 cM. On lines 3 and 4, my brother and I have ~36.5 cM that begins overlapping with Amy's segment then runs to the far right end like the others on the right. Finally my second cousin Rhoda (line 9) has a 9 cM segment that falls under Amy's and a 23.7 cM segment like mine and Dan's but not as long.

Tara's Romanian geography does not fit our eastern Galicia, nor does she have any of the very few surnames we know on the sides we share with Herb.

Of course, the thing is that if Herb has a legitimate 70 cM match with Tara, I would guess that the MRCA would not be expected to be much before 1800.

Triangulation
Before anything else, I did a triangulation to see whether all eight of the Pikholz descendants actually match Tara and Herb in the same places - or whether perhaps Herb and Co. match Tara on one of her parents and some of us match Tara on her other parent. I did that by comparing all eight (plus Tara) to Herb. Tara is on line 4 and the black vertical lines mark the ends of her match with Herb. That is the area we are interested in for triangulation.

Amy is on the left. Judith, Terry and Sarajoy are on the right. Rhoda, Dan and I overlap both sides. This is the same as our match with Tara above, so the triangulation works. Vladimir matches Herb, but not here, so he is no longer part of this analysis. He does match Tara, but the common ancestor is through her other parent.

Matching Segments
My next move was to look at Tara's Matching Segments analysis to see who else matches her long segment with Herb. (I have referred to Matching Segments before. It is a GEDmatch tool on Tier1 which requires a small donation.) I decided to limit this search to segments of 13 cM or more, but I was really interested only in those over 15 cM. 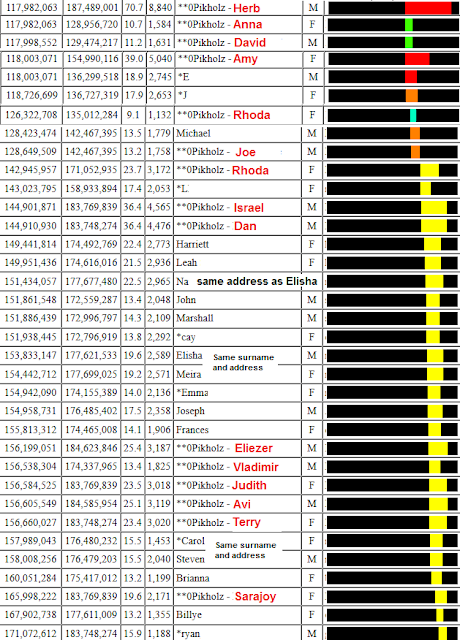 These are the results with personal information redacted and my family in red. (In this case, there is no significance to the colors on the bar graph.)

I added in the small segment from Rhoda. Eliezer is Judith's son and Avi is Judith's twin's son, so I had excluded them from the chromosome browsers above.

I also added in my fourth cousins, the half-siblings David and Anna (the second and third from the top) even though they are only about 11 cM. They did not show up on Tara's chromosome browser but they did show up here. Same thing with my third cousin Joe. In all three cases they show up on a one-on-one with Tara, with a single matching segment. (GEDmatch probably has some obscure rule that explains this.)

All three triangulate with Herb.

What is significant with all three is that they are not descendants of my great-grandmother, so Tara's segment with Herb and Co. appears to be a Pikholz match, not a Kwoczka match. (There is a reason I say "appears to be" but I won't go into that here.)

Just for fun, I ran Tara on the fancy one-to-many at Tier1 and the three single-segment matches don't show up there either. Not even when I raise the limit from 2000 to 5000. Furthermore, the 2000-match Tier1 search does not give all the normal matches that the regular 2000-match search shows. Much as I love GEDmatch, sometimes you have to look at something half-a-dozen ways to get a full picture and then hope you got it right.

Triangulating Tara's non-Pikholz matches with Herb
I did one-to-ones between Herb and each of the twelve people in the above list whose matches with Tara are 15 cM or more. Leah and the three in the "Elisha group" do not match Herb at all, so they are on Tara's other side.

E, J, Carol, Steven and Ryan match more or less according to their matches with Tara, though Ryan's is about 30% larger.

The other three - L, Harriett and Joseph - match Herb on no more than 10.5 cM of their matches with Tara. What about the rest? Who knows. It will require further inquiry.

What happens next?
Before I draw any conclusions and even before I write to any of these matches, Tara's mother has agreed to test. Probably her father too. That should clarify whether Tara's long match with Herb is from one of her parents or is perhaps - as is likely - a composite, part from her father, part from her mother. The "Are Your Parents Related" tool on GEDmatch shows her parents unrelated to one another on chromosome 3, so we needn't worry about that.

Oh, and Tara has a paternal grandmother who is willing to test. Anyone in Montreal who can help with this?

Meantime, Tara has joined our surname project at FTDNA.

AMENDED- Follow up posts here and here.
Posted by IsraelP at 1:03 PM