For the last year or more, I have been getting project administrator notices like this

that appear to be seriously skewed towards the newer tests. That is, one sibling who tested recently seems to be getting lots of these while others who tested earlier are getting many fewer. I discussed this with Janine at RootsTech and she sent me to the Help Desk people. All they have been able to say - and I paraphrase here - is that different siblings match different ways.

But this evades the question. 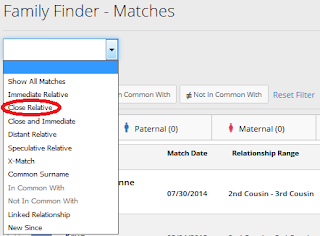 I looked at the matches through the filter shown on the right.

I removed the known cousins who are third cousins or closer from the numbers below, though it really shouldn't matter.

The absolute numbers are large, but this an endogamous population.

His brother Marshal's was received nearly two years later on 11 February 2016. He has 89 close matches.

His sister Beverly's test was received 5 December 2016, also nearly two years later. She has 95 close matches. More than three times as many as Sam. Another outlier?

My brother Dan's test was received in Houston on 7 January 2017. He has 103 close matches.

The dates and numbers for the rest of us:

I'm no statistician but it appears obvious that the recent tests are getting close matches that the earlier ones are not getting. The siblings angle isn't the issue - it's just the way to make the proof argument.

I can't be the only person with results like this. What say the rest of you who have tested full siblings, both recently and say two years ago?

If it's just me, they can try to ignore me.

How about it, FTDNA? What's wrong and how are you going to fix it?

Previous posts in the Six Siblings series are here and here.
Posted by IsraelP at 5:23 AM