That Time of Year

Skalat
The Jewish community of Skalat, one of the two ancestral Pikholz towns in east Galicia, suffered its final aktzia on the holiday of Shavuot in 1943 and here in Israel some of the remaining survivors and descendants gather the following day at the monument in the Holon cemetery. I have described this service in earlier years here and here and here.

We had a bigger turnout this year than last. Something more than two dozen people and no problem with a minyan. There was no mention of the passing of survivors in the past year.

Yocheved Sarid spoke first. Her three children and her late brother's wife were all there. The row of monuments is along the east side of the cemetery with a major highway right outside, so I found it difficult to hear her.

Tova Willner Zehavi spoke at great length. I don't remember her ever speaking before. She spoke with special emphasis about a baby - one who was never properly given a name. Pikholz descendants, the sister and brother Tzipi Tal and David Dekel are also Willner descendants through their mother's mothers mother. (Before the service began, David and I discussed his DNA results which indicate pretty clearly that he is connected to my family in a way we haven't figured out yet. I discuss this in Chapter Eight of my book.) 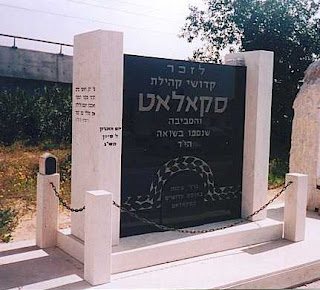 There was one new participant - Koby Willner, an American immigrant who got in touch with me last year. Koby's Skalat connections are both Willner and Bomse.

David Braunstein, who has come the last few years after his father's death read a piece that his father had written. (Chaim Braunstein edited the Hebrew yizkor book and was the prime mover in setting up the memorial sites in the Skalat-area itself.)

Zvika Sarid reported that both the Skalat monuments are in need of maintenance and asked that those who can send contributions to Yocheved Sarid at Kevutzat Yavneh and she will send them to Skalat.

We concluded with everyone saying kaddish.

Correcting the database
Steve Pickholtz sent me a very long list of Pickholtz (that specific spelling) on MyHeritage which includes a Rachel Weisinger married to Joseph Pickholtz. There was no identifying information here and I haven't a clue who this Joseph is. I had seen this couple before on Geni.com, but as I have seen before, you cannot always get responses from the folks who manage the Geni.com information.

This time, I got a response via MyHeritage and Olivier in France checked with his family sources and reported that he had no information on the couple but did know the name of a nephew of Joseph. That was enough for me to recognize Joseph as the son of Benjamin (Bendit) Pickholtz of Rozdol, Skole and New York. Joseph had no children but a nephew had told me years ago that his wife was Rae Gross.

I went back and forth with both families for a few hours and then decided to check the theory that made the most sense to me. Using Steve Morse's One-Step site, I found this:

Rae (Rachel) Weisinger married Harold Gross in 1934. That triggered memories in both families where everyone agreed that Rae had been married before she married Joseph Pickholtz. Database corrected.

Housekeeping notes
Family Tree DNA has announced a Fathers' Day sale. I for one am disappointed as I can only see one of our pending orders for which it is relevant. This is their announcement. 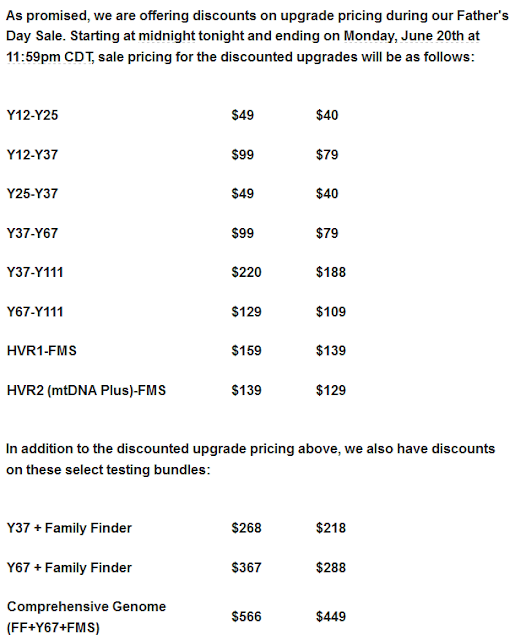 I will get one second cousin out of this. The rest will wait. I hope.

I have just set up a couple of additional visits with cousins as I work my way from Baltimore to North Carolina next month. The "new" Pikholz family in Durham has still eluded me.
Posted by IsraelP at 1:21 PM