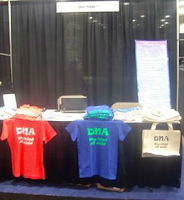 Story-telling and genetic testing can both be the hottest topics in our conversation.
Posted by IsraelP at 6:32 PM