ENDOGAMY: One Family, One People

For three years, I blogged nearly every week. A few months ago, that changed. I posted four blogs in January and six in March, but only one each in February and April and two in May. There was a reason for that. I was temporarily busy with something else.

It's time to tell you. 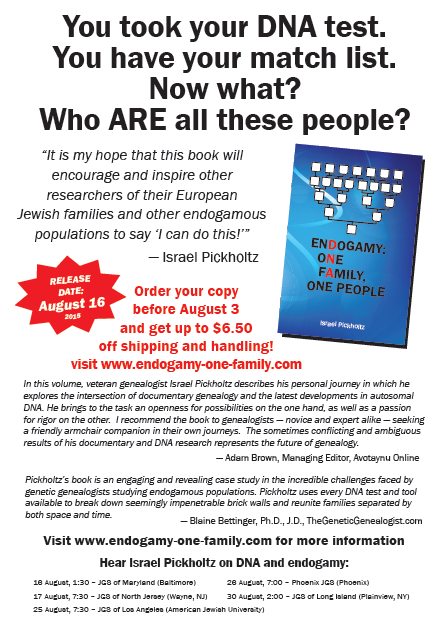 ENDOGAMY: One Family, One People tells you of my successes thus far in making sense of my families' DNA tests, despite the problems of generations of marriages within the tribe. My own story is a Jewish story and my examples are Jewish examples, mostly from east Galicia. But the principles are relevant for other endogamous populations as well as for the general genetic genealogy community.

Although the nature of my research and the structure of my families are probably very diffferent from yours, I believe that you can learn from my experience. I am here to inspire you to say "I can do this!"

ENDOGAMY: One Family, One People, published by Colonial Roots, will be officially launched at a meeting of the Jewish Genealogical Society of Maryland on 16 August and is available for preorder now.

Sales through the website are being coordinated by Gold Medal Ideas, who have come out with a special line of genetic genealogy T-shirts and accessories. Those too are available on the site.

Meantime, I shall be hanging out much of this week at the IAJGS Conference here in Jerusalem.
Posted by IsraelP at 1:17 PM