Getting the Y-Chromosome Right

The Rozdol Male-Lines
It is axiomatic that all the Pikholz descendants from Rozdol are from a single couple, Pinchas and Sara Rivka, whose youngest known child was born in 1818.

I never expected the Y (male-line) DNA to match the three identical lines from Skalat because I have been assuming that if the families in the two towns are related, it is through Sara Rivka, not Pinchas. But at least the Y-DNA of the male-lines from Rozdol should all be identical, unless there was a mutation in the last two hundred years.

Of the nine Rozdol lines, one is a maternal line back to the 1830s, two have no male line descendants, two (Robert and Gadi) have taken thirty-seven market Y tests, one (Micha) took a twelve marker Y test and three have not agreed to test, despite being asked multiple times.

The problem has been that Robert (who is traceable to Pinchas and Sara Rivka as a fourth-great-grandson) and Gadi (traceable to his second-great grandfather David ben Isak and Feige, who was born about 1823) do not have matching DNA. It is possible that the connection between Gadi's David and the original couple Pinchas and Sara Rivka is through his mother Feige rather than his father Isak, but it did not sit well with me.

At the time of the recent sale on DNA tests, when more than twenty Pikholz descendants ordered tests (all but one from Skalat), I decided that we needed to upgrade Micha's test from twelve to thirty-seven markers so we could see how he compares to the other two.

In the meantime I had a closer look at Robert and Gadi.

They were identical except in two markers - DYS437 and DYS438. In the first Gadi is 14 and Robert is 11. In the other, they are reversed. In each case, there is a difference of three so together we are looking a difference of six. Six mutations in two hundred years on those markers is highly unlikely and the numbers are too symmetric for my taste. After a Facebook discussion with some of my colleagues, I became convinced that in one of the two cases, the results were reversed.

A few days ago, Micha's results came in for markers 13-37 and he is a perfect match for Gadi.

I wrote to the always reliable Janine at Family Tree DNA and asked her if she could check Robert's results to see if perhaps they had reversed DYS437 and DYS438. She did and I was right. The results that we have for all three are now identical and will be corrected to haplogroup R-M269. This is the same as our Skalat haplogroup, even though the numbers themselves are very different.

There is a moral here, of course. Sometimes the testing companies make mistakes. When you make good case, they are willing to check their work. But no one will find this kind of thing for you. You have to have enough information to make the case and you must pay enough attention to the details to realize that there is a case to be made.

I'd still like to get those other three Rozdol families to do Y tests. And all six who have not tested to do Family Finders.

And speaking of mutations
Y-37 results came in a couple of weeks ago for a member of another of my families. 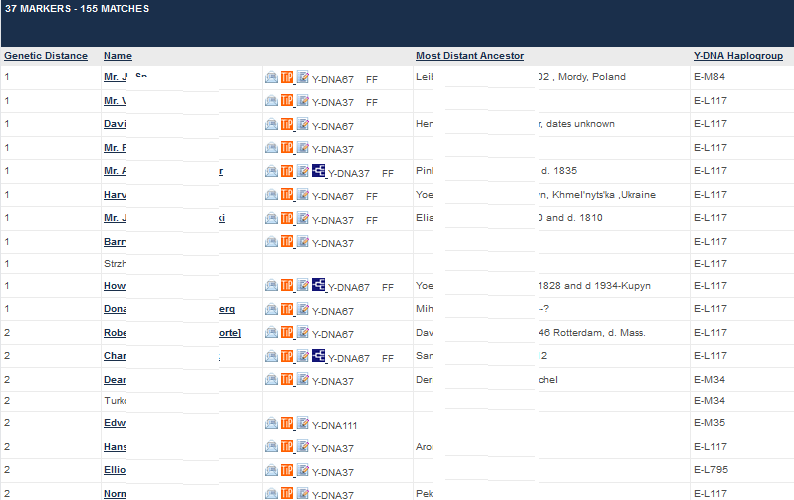 My strategy for following up with these kinds of matches is to see who has both a close Y match and a Family Finder match of "third cousin-fifth cousin" or closer. I have seen experts who say that the Y chromosome has mutations every four or five generations on average, but this can vary, depending on where the mutation occurs and on the vagaries of DNA inheritance. After all, in both the Skalat and the Rozdol Pikholz families, all three DNA tests show no mutations at all in the last two hundred years.

Following up Y matches is more than a bit of a crap-shoot, so I generally think in terms of a genetic distance of one being worth looking at and anything further being too low-probability to bother with unless there is a very good Family Finder match.

But in looking at these particular results I realized that I was missing a point of logic. I am willing to look at a match with a genetic difference of one because the most recent common ancestor might well be four-or five (or less if I am lucky) in the past. But a genetic distance of two does not have to mean double that. The second mutation could be in  the other person's line.

I tested the reaction to that theory in the ISOGG Facebook group, and a brief but spirited discussion ensued. Some agreed that I was making sense. Some not so much. There are always some in that second group. Some of the people I most respect thought I was correct. That's good enough for me. In any case, we are talking about probability, not conclusive fact.

Housekeeping notes
Five Pikholz Family Finder results came in over the weekend. It will take time to analyze, but it appears that two have excellent results, two are about what I expected and one is very odd, having no Pikholz matches in her first fifty-five. (She has lots of known relatives.)
Posted by IsraelP at 7:30 AM